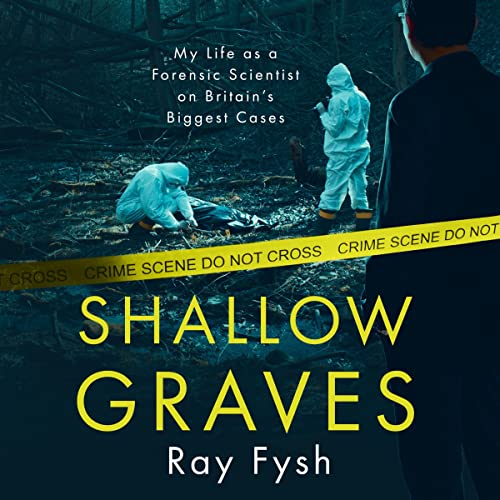 By: Ray Fysh
Narrated by: Michael Chance
Try for £0.00

The murder of Sarah Payne, Adam the Thames Torso, the London bombings, the Night Stalker and the poisoning of Alexander Litvinenko... The solving of all these cases can be linked to one man: Ray Fysh, a Charlton Athletic fan from Woolwich, a natural raconteur and also one of the finest forensic detectives the country has ever seen.

Ray began work for the Met Police in the 1970s when forensic investigation was seen as little more than a geeky side show, only in existence to confirm or eliminate evidence. But by the mid 90s, Ray and his team had made huge progress in their field, contributing to the UK becoming a world-leading innovator in forensic techniques, with Ray himself being named as Special Adviser to the Forensic Science Service. As the SA, Ray worked alongside Senior Investigating Officers from day one of a case, directing his team to identify forensic opportunities and harvest case-cracking clues.

As Ray looks back over his career at the cases he worked on, the listener is given unparalleled insight into the highs and lows of an astonishing career, the historic classist snobbery of the Met and the stunning realities of crime and forensics.

What listeners say about Shallow Graves

Really engrossing and brilliantly read. Tails off slightly towards the last few chapters but still an excellent book overall.

…. it’s badly, transparently, ghost written. Because of this, the focus of the book comes across as Ray Fysh, & very rarely as the forensic work or the intricacies of the cases. The way the narrative is done makes the author appear to be self-obsessed and smug, like some cop in a TV crime series. What a shame!

Having listened to a few audiobooks on crime and murders I really liked how complex concepts were explained clearly without leaving you feeling like it was being dumbed down.

This book was exceptionally well written and keeps you interested the whole way through. The subject matter is dark but the cases are told in a respectful and interesting way. The science is explained very well and is fascinating. Thoroughly enjoyed every second of this book.

The narrator was also fantastic and it felt very authentic.

Brilliantly told- I was gripped!

I thoroughly enjoyed this book- it was so well written and utterly fascinating! Loved the narration too!

You think you’ve read crime books until you read this one. It takes you deeper into what happens with science and the wonderful people who do it.

Very informative and interesting! Overall a great insight in to the world of forensic science

Fascinating and easy to listen to. 9 more words required to write this review. Unnecessary

I liked the technical detail and the lack of personal soul searching which is So Often present in books of this genre, inserted at the behest of the publishers I am sure. So here is a factual but readable book which Is very enjoyable to listen too.