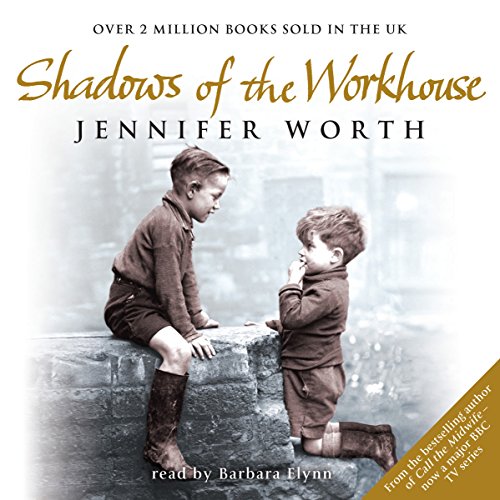 Shadows of the Workhouse

By: Jennifer Worth
Narrated by: Anne Reid
Try for £0.00

The inspiration for the second series of the BBC's phenomenally popular Call the Midwife, starring Miranda Hart. In this follow-up to Call the Midwife, Jennifer Worth, a midwife working in the docklands area of East London in the 1950s, tells more stories about the people she encountered.

There's Jane, who cleaned and generally helped out at Nonnatus House - she was taken to the workhouse as a baby and was allegedly the illegitimate daughter of an aristocrat.

Peggy and Frank's parents both died within six months of one another, and the children were left destitute. At the time there was no other option for them but the workhouse.

The Reverend Thornton-Appleby-Thorton, a missionary in Africa, visits the Nonnatus nuns, and Sister Julienne acts as matchmaker. And Sister Monica Joan, the eccentric 90-year-old nun, is accused of shoplifting some small items from the local market. She is let off with a warning, but then Jennifer finds stolen jewels from Hatton Garden in the nun's room. These stories give a fascinating insight into the resilience and spirit that enabled ordinary people to overcome their difficulties.

What listeners say about Shadows of the Workhouse

Excellent book, well worth listening too. The narrator was very good and the stories were heartbreaking, but gripping. Jennifer Worth is wonderful woman with the gift of writing.

Had me hooked from the start. Absolutely wonderful

Great narration, wonderful writing and excellent book :)
This was my first non self help book I've listened to and I wasn't disappointed, I can't wait to listen to more Jennifer Worth books :)

Shadows of the workhouse

Narrator was brilliant! Great book. Reccommend. couldn't put it down as so interesting. Loved it

Difficult topics are covered from life in the 50s & earlier but this is so well written & provides a thought & emotion provoking glimpse into another era.

narrator was good. it was a good listen. would recommend to Call The Midwife fans.

a detailed history into what the world used to be like. to think workhouses were real places where this happened. listened to this several time and it still has me tearing up.

I absolutely loved this book. the narrator read the story beautifully and with sympathy to the people whose stories she was telling.

Very emotional. Had me laughing & crying.
How horrid families being split up in The Workhouses.

great history of the workhouses I had no idea of their history prior to listening to this. highly recommended for anyone interested in history or human development through the agas.