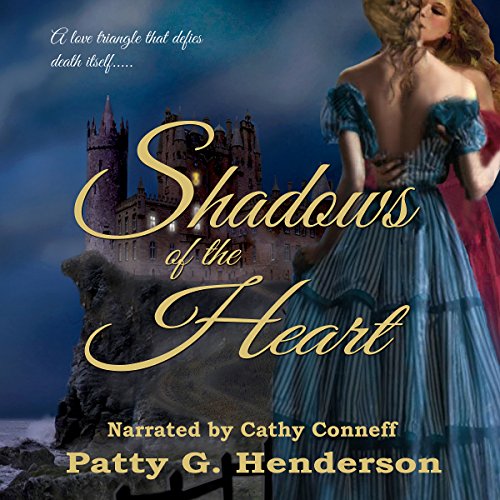 Shadows of the Heart

By: Patty G. Henderson
Narrated by: Cathy Conneff
Try for £0.00

England during the early 1820s was a hostile place for unmarried women without family or home. After losing upper class standing because of her father's gambling habit and scandalous suicide, Annalee Stewart believes her fortunes improved when she is hired as companion to the young but sickly and frail Lady Lenore Blackstone. Although the adjustment from being a member of the wealthy class to finding oneself suddenly in service to it promises to be difficult, Annalee has no choice but to accept where fate has thrown her. She did not expect, however, to be thrown into the dark and dangerous world of poisons and premeditated murder forcing her into protector status as well as companion.

Annalee's growing attraction to Lenore, and Lenore's unexpected positive response, puts them both in the treacherous path of Lenore's husband, the cold and pre-occupied Earl of Blackstone. Annalee has also captured the eye of the Earl's sister, Victoria. Her bold flirtations serve to confuse Annalee's heart. Thrown into this tumultuous triangle of love, seduction, and deception, Annalee must sort through her real feelings and confounded passions. Faced with the potential demise of one lover whilst falling inexplicably toward the heart of another, her own life is threatened from within Blackstone Castle.

In the deepest shadows of love and loss, Annalee must feel her way through the darkness, face her fears, and trust that she will uncover the beacon she needs to find her path to true love.

What listeners say about Shadows of the Heart

I enjoyed listening to this book as an audiobook.
The narrator was good and the story interesting. The villains were obvious, and although I didn't expect them to be successful, it wasn't a shock.
I received a free audio copy from the author for an honest review.

LGBT romance in the victorian era

I received a copy of this book in audio format from the narrator in exchange for an honest review.

Annalee Stewart belongs to a prestigious family in England during the 1820s. But after his father lost everything on gambling and his posterior suicide, Annalee's life changes drastically. Her only option is getting hired as a companion for a rich lady. She is recommended to take care of Lady Leonore Blackstone, a very fragile woman who lost had a miscarriage and is not able to get pregnant again. Annalee falls immediately in love with Leonore, and will try to find out what is wrong with her Lady's health.

I am not much for romance, but I was curious about how an LGBT romance in the XIX century would go. The books is beautifully written, and their characters are presented and described with all kind of rich details. I found interesting how daily life in the castle was, and found odd how much free time Annalee often had.

There is a third important woman in this story: Victoria, Leonore's sister in law. I think she is one of the most interesting characters in this story due to how different she is from the rest, and how she rejects many laws of society. She is also strong willed and intelligent.

I have to say that the end of the book was quite predictable, but I really hoped Henderson was going to surprise me. And she did, but not how I wanted. The first half of the book is compelling, having the listener wanting to know how these relationships will work out; but the second half is depressive and anticlimactic. We foresee what will happen and realize that Annelee will not to do enough to prevent it. I felt helpless seeing how Leonore, weak and without personality, let everyone decide about her, and Annelee, with a bit more judgement than Leonore, did nothing to help her. It was like seeing a disaster coming in slow motion: heartbreaking. I am sure that if it had depended on Victoria, things would have happened in a very different way.

Cathy Conneff did a wonderful interpretation of the three woman in this story. She transmitted their feelings and brought the characters to life. I missed some variation in voice range and the male voices need more work. Leonore had a different accent that I was not able to place but discovered later on that she was French.

It was an interesting read, quite different from what I am accustomed to. I think it would interest to anyone into romance and victorian novels.

A compelling read, if with some issues

The author has a very good story here. She had good command of the language, improved by the skill of the narrator. The thing that made me struggle with finishing the book is its execution. The pacing, particularly related to the romance itself, was peculiar in that it, as another reviewer put it, went from 0 to 60 with little lead-up or explanation for the rather abrupt turn. There was also a tad a melodrama that could've been reduced, and an occasional sense of confusion that seemed equally shared between the character and the author (such as making the choice of not pursuing her love interest, and then (the next minute) deciding otherwise without a prompt). She also had the tendency of being redundant, or over-explanatory, when the reader only needed the single sentence to get the hint.

The plot itself, although at times predictable, was well laid out, and I commend any writer for taking on historical fiction, particularly with a lesbian twist. The author says at the end of the audio that she appreciates looking at reviews here, so I'll finish with this: do keep going. Your mystery was compelling, and it had me not wanting to turn the book off as there was a new revelation or curiosity at every turn that kept me interested and wanting more. I'm eager to read your other books for their stories; please consider for all future books that redundancy is always unnecessary. All we need is a good, revealing sentence. And, a good romantic build.

An enjoyable step into the world of Gothic Romance

This is my first foray into the world of Gothic Romance, and I greatly enjoyed the story. The characters were interesting and the intrigue between them kept my interest. I found myself happily anticipating each chapter.
The narrator gave distinctive voice to the different characters so that I always knew who was speaking, but there were some technical issues, such as the volume fluctuating too much throughout the book, that at times, took me out of the story.
But with winter coming on, and days to be spent indoors, this is an enjoyable way to spend those hours ahead.

Shadows of the Heart is an intriguing story that I'm sure Gothic fans will love.

A delightful Gothic romance, full of atmosphere, romance. and intrigue! Cathy Conneff's immersive narration heightens the listening experience and enhances Henderson's storytelling. Although it's Spring, this audiobook draws the damp fingers of fall around me. I can't wait to devour the other tales!