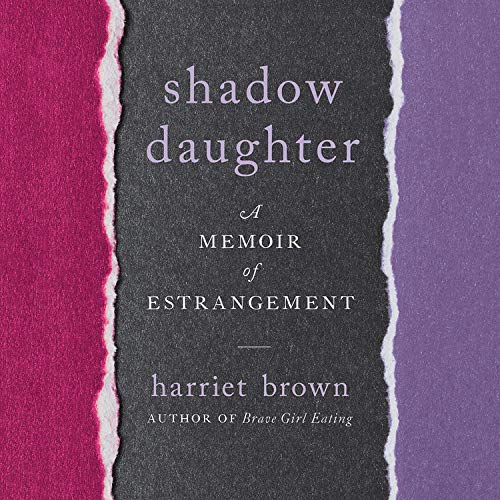 A riveting, provocative, and ultimately hopeful exploration of mother-daughter estrangement, woven with research and anecdotes, from an award-winning journalist.

The day of her mother's funeral, Harriet Brown was 5,000 miles away. To say that Harriet and her mother had a difficult relationship is a wild understatement; the older Harriet grew, the more estranged they became. By the time Harriet's mom died at age 76, they were out of contact. Yet Harriet felt her death deeply, embarking on an exploration of what family estrangement means - to those who cut off contact, to those who are estranged, to the friends and family members who are on the sidelines.

Shadow Daughter tackles a subject we rarely discuss as a culture: Family estrangements, especially those between parents and adult children. Estrangements - between parents and children, siblings, multiple generations - are surprisingly common, and even families that aren't officially estranged often have some experience of deep conflicts. Estrangement is an issue that touches most people, one way or another, one that's still shrouded in secrecy, stigma, and shame. In addition to her personal narrative, Harriet employs interviews with others who are estranged, as well as the most recent research on family estrangement, for a brave exploration of this taboo topic. Ultimately, Shadow Daughter is a thoughtful, deeply researched, and provocative exploration of the ties that bind and break, forgiveness, reconciliation, and what family really means.

What listeners say about Shadow Daughter

As the mother of an estranged daughter this book gave me a lot of insight into how to proceed, or not, in attempts to reconcile. I think we need a time apart to grow.

A Worthy Read especially if any Estrangement in your family. Gave me a lot of comfort & understanding of family estrangement.

Fantastic Book for Daughters with difficult relationships with their mothers

This book has been life changing for me. I feel so understood for the first time in a long time. I have struggled with my relationship with my mother and have always wondered what is wrong with me. The validation this book provides has been a bright light of hope for me. I’m so grateful to Harriet Brown for putting into words what I couldn’t explain. This is a must read.

It was a Waste of my money & time. Nothing new in the novel. Do not recommend it

Very dangerous & harmful for society as a whole

Author is messed up mentally and this will be a very unfair negative influence on others. This author is someone who is very mentally ill and sadly never got the PROPER and much needed counseling while she was young and throughout her life, even as an adult. This book will do more harm to others reading it. It is basically her opinions that are not supported fairly or properly. She seemed to use those such as specialists as Dr. Sharp who validated and supported the authors thoughts and feelings and to validate the author for the actions and treatments she had instilled in herself and her life.

Her credentials and research and specialists were very biased, Dr. Sharp especially, were mainly improper weak sources, even her studies used were one sided and not an accurate picture to the complete issue. The author seemed to only pick and chose bits and pieces of everything that favored her ideas and she left out anything and anyone that contradicted her. She seemed to mainly use pretty much those that validated or favored and or supported her negative decisions, acts and thoughts and treatment towards her parents and family. This author is and has been mentally ill since a very young age it seems. People like this author and her supportive specialists and interviews have led to an extremely wrong and unfair and very hurtful severe critical epidemic with estrangement between parents and adult children.

I would love to be around and see this author give this book to her children as they enter into the era where they become adults. I would also love to see them do this whole unfairly estrangement issue with her, the author as their mom....for whatever reason they feel that they need to blame their mom for any kind of troubles or ill feelings whatsoever that they may have in their adult years.

THIS BOOK AND ALL OF ITS COMMENTS (the authors opinions and blaming mechanism) IS NOT THE WAY TO DEAL WITH YOUR OWN ISSUES...YOU DON'T JUST BE SO SELFISH AND HURTFUL AND THAT IS EXACTLY WHAT THIS AUTHOR IS AND HAS DONE. YOU GET PROPER COUNSELING WITH A PROPER PERSON AND YOU TRY TO WORK THRU ISSUES AND THEN YOU ACCEPT EACH OTHER FOR WHAT YOU BOTH ARE AND MOVE ON AS A FAMILY TOGETHER BEING THERE FOR EACH OTHER AND HELPING EACH OTHER, NOT EXPECTING EACH OTHER TO BE A PERFECT VERSION OF THEIR OWN WISHES!! THIS BOOK IS WRONG AND VERY HARMFUL TO SOCIETY!

This was a good read to understand people's hearts and the view of a daughter and her estrangement with her mother. I t is a good read for someone who needs a view of the child's perspective

I thought I was alone

This book allowed me to take that step to stand firm in my decision to break away from my mother. Thanks!

thank you for sharing your story. I found it very helpful regarding my own estrangement.

Extraordinary book about dealing with a mean parent

This is the first book I’ve ever read that made me feel like someone understands what I’ve gone through with my own parents and sister. What a relief to hear about others who have had to deal with a self absorbed mother and emotionally weak father. Thank you, thank you, thank you, Harriet.

In this book, which is both a very personal memoir and a journalistic piece, Harriet Brown bares her heart to us while also providing interesting research and illuminating examples of other people’s experiences with estrangement, and that which led to their estrangement. This book is a validating resource for someone who has had to make the difficult choice of estrangement. I would also recommend this book to therapists who wish to understand the topic better. The book is very well written and it was a pleasure to listen to the audiobook.