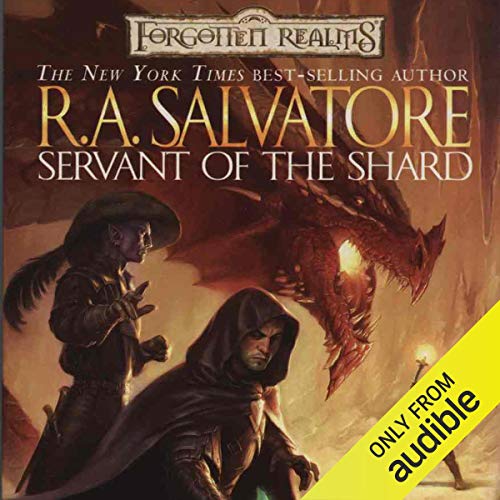 Servant of the Shard

The Assassin: Surrounded by dark elves, Artemis Entreri tightens his grip on the streets of Calimport. While he urges caution, his black-skinned sponsor grows ever more ambitious. The assassin will soon find himself on a path his most hated enemy has walked before him - a path that leads to a place where someone like Entreri would never be welcome.

The Drow: Jarlaxle has ascended from dark Menzoberranzan with only evil intentions. The malevolent Crystal Shard’s influence on him intensifies until even the drow agents he brought with him grow fearful. When Bregan D’aerthe itself begins to turn on him, Jarlaxle will be forced to find a savior in the man he’s come to enslave.

What listeners say about Servant of the Shard

good story enjoyed it, but the book is a set of 3, and the 3rd book as never been released on audio so I cant recommend, it very disappointing after paying for the first 2 books

well paced. great narration. entertaining characters. Salvatore writes action sequences as good as anyone, always has. and this book is full of them

The Shard is back!

For those of us who have kept up with series you know that Jarlaxle with the help of Artemis Entreri stole the crystal shard from the companions of the hall when they were on their way to destroy it. Now we find out what happened to the shard.

Here we are in book one with Jarlaxle on streets of Calle Port without anyone knowing it. Artemis Entreri is still recovering from his time in the Underdark amongst the Drow all the while trying to keep Jarlaxle inline. As you progress through the story you see why this ended up with a very old worm being called in to solve this issue. I enjoyed a story without the companions of the hall and bring back in old friends.

loved every second. fight scenes are vivid in my imagination. I listened to it twice.

Yes the best love it

What made the experience of listening to Servant of the Shard the most enjoyable?

What was one of the most memorable moments of Servant of the Shard?

What does Victor Bevine bring to the story that you wouldn’t experience if you just read the book?

Brings it to life

Thank you ra and audible

I just kept realizing that I hadn't paid attention for the last few seconds, minutes, whatever. I figured It would get better after the initial set up but it never did. The story was just dull, the characters flat and the narrator monotonous. I got tired of continually rewinding and gave up.

As always the best battle scenes that RA is so competent with. It was great hearing them. Goid story, terrific performance m

I tried to like this one. Listened to half of it before I gave up. Just really really dry and boring. Might put it on a night I can't sleep.

From heroes to anti-heroes, RAS is a master!

R.A. Salvatore and Victor Bevine bring The Forgotten Realms to life again with a tale of shadow and intrigue and action. This novel continues the pairing of Artemis and Jarlaxle, and the mercenary band Bregan D’aerthe as they weave a web on and under the dangerous streets of Calimport. Twists, turns, surprises and betrayals abound as well as unexpected alliances. Another wonderful book by Mr. Salvatore, and another brilliant performance by the talented Mr. Bevine.

This series follows Jarlaxell and Enterie on their adventures separate from the main characters. The story was excellent and the character study of both characters was very interesting. This series is a nice break from the rest of the books because it explores in detail the other characters.