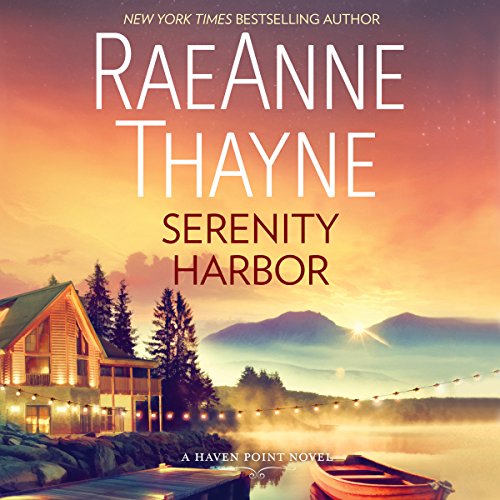 By: RaeAnne Thayne
Narrated by: Vanessa Johansson
Try for £0.00

In the town of Haven Point, love can be just a wish - and one magical kiss - away....

Computer-tech millionaire Bowie Callahan is about the last person that schoolteacher Katrina Bailey wants to work for. As far as she can see, he's arrogant, entitled, and not up to the task of caring for his young half-brother, Milo. But Kat is, especially if it brings her closer to her goal of adopting an orphaned little girl. And as her kindness and patience work wonders with Milo, she realizes there's more to sexy, wary Bo than she'd ever realized.

Bo never imagined he'd be tasked with caring for a sibling he didn't know existed. Then again, he never pictured himself impulsively kissing vibrant, compassionate Katrina in the moonlight. Now he's ready to make her dream of family come true...and hoping there's room in it for him, too.

What listeners say about Serenity Harbor

Back again to Haven Point. Another sweet story worth listening to. The narrator did a great job. I highly recommend it to anyone who is in the mood for a short fun romance.

I won all of the books in this series and love them all! She is an excellent author and Vanessa Johansson does an outstanding narration.

I couldn't believe that this book was so simple. The crying was overdone. The theme was built on a mystery in Columbia. I felt cheated at the ending. written like a fairy tale.

My favorite story so far. Relatable.

I enjoyed this book and related to the main character. This has also been my favorite narrator in the series. Sister Thayne rocks!

This is another great book in this series!!! Enjoying the characters and storyline!! Excited for the next book!

Thoroughly enjoyed this story. The author captured the special needs world with true-to-life details. As a special needs educator, it does my heart good tonread a heart warming story including the warm hearts of individuals with special needs.

I really enjoyed this story. I did feel like there were so many characters in the beginning that it was a little overwhelming. I didn't initially know which characters that I should focus on; however, it did even out. Katrina is visiting Haven Point for her sister's wedding when she meets a sweet little boy in the supermarket on the verge of a meltdown. Bowie the little boy's brother and guardian do not have a complete understanding of his needs. Katrina helps Bowie avert the meltdown and hires Katrina to help him out in taking care of his little bother with special needs. Both of them work through their flaws and in the end it was a great representation of a differently blended family.

This specific video review will be included in the October 2018 wrap-up.