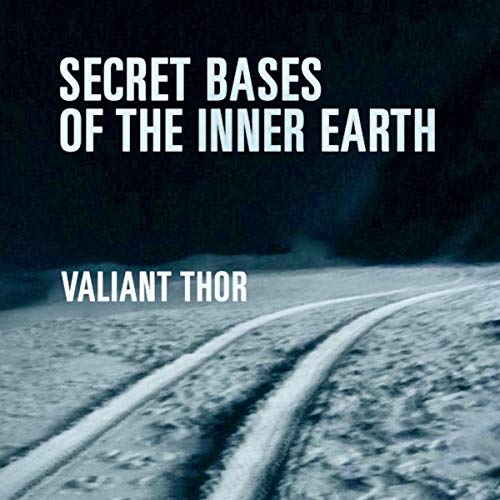 Secret Bases of the Inner Earth

By: Valiant Thor
Narrated by: David Bufton
Try for £0.00

In the “it can now be told” department, we may now reveal that the mysterious “Commander X” was none other than the enlightened Venusian sage Commander Valiant Thor. Unfortunately, this sleight of hand was necessary during most of the 20th century due to heightened Cold War tensions and various threats that had been made against Thor and his family, who were working hard to end warfare and nuclear bomb testing on Earth.

Since conspiracy researchers like Jim Keith, William Cooper, and Gray Barker had the ear of the public, it was crucial they be among the first Earthlings contacted. Thor worked closely with Barker, in particular, contacting many UFO witnesses and convincing them to write books and articles about their experiences, thus keeping flying saucers and the machinations of the deep state at the forefront of alternative news.

Thor was not appreciated at all in the Soviet Union and was constantly under surveillance by Eastern Bloc agents. Today, he remains a staunch opponent of dictatorial regimes and their attempts to control Pres. Donald Trump. (Thor has even claimed that Trump is the Antichrist, penning a book on the subject called Oh, Hear Ye! The Trump of the Super-Deceiver: Mystery Man of Darkness, 666.)

Thor even went undercover as a US military trainer and intelligence official, working with Air Force and Navy officers such as Dan Fry, Calvin C. Girvin, Albert K. Bender, William F. Hamilton, William Mills Tompkins, and Mel Noel. Many of these contacts came before Thor’s forced internment in the Pentagon between 1957 and 1960, after which the Thor family became more circumspect about working with citizens of our planet.

At one time, Thor worked closely with Nikola Tesla, sharing all the knowledge he could with that advanced human, even though some of it may have skirted the fringes of galaxial law (which states that we should merely observe underdeveloped species rather than actively intervene on their behalf).

Of course, Thor was never totally imprisoned in the Pentagon. As mentioned in Dr. Frank E. Stranges’ Stranger at the Pentagon, Thor could sneak out anytime he wanted. And he did so many times in order to spread to various contactees the antinuclear message, which is still important today. Luckily, Thor succeeded and was able to convince world leaders to pull back from the abyss of all-out nuclear war.

The work of Commander Valiant Thor and his Venusian associates was obviously of great importance in helping mankind through a difficult time. What we will ultimately do with the many concepts that Thor gifted Tesla, Keith, Cooper, Barker, and others is, of course, still up in the air. But, so far, so good.... I ask my followers now to continue supporting the endeavors of these courageous Venusians. May we all someday experience a world free of fear and war and enjoy our birthright as free citizens of this galaxy.

What listeners say about Secret Bases of the Inner Earth

I love the Valiant Thor books, although I wonder if this is really Valiant Thor’s work. The Narrator is not really nice to listen to. Most of Valiant Thor’s book are narrated by different people. There is one narrator in particular that I like, I forget the name which is about mount Shasta, but other than that most narrators just doesn’t match up with the writers quality. I’m considering the buy his books in paper. Anyway, Secret bases of the inner earth. Great subject! One of the many topic I like the most. Also because I’m a inner earth experiencer as well. For me listening to this book is like some puzzle pieces fall into place. I definitely recommend this book if you’re interested in the topic.

this listen is so good I listened twice & will do many times I'm sure 👍got to be one of the best & relavent listens on current events & happenings 🙂. fantastic keep the info coming audible . 😃

A lot of Information

This is a very enlightening read. I believe that Valiant Thor lives and watches over earth for us. I also believe everything he shares with us.

If you like to listen to a 5-year-old lie to you for hours on end then this is the book for you! The author puts no more effort into his lying than a 5-year-old would in covering up stealing a cookie from a cookie jar with chocolate smeared on his lips.

The supposed valiant Thor from Venus delusionally attempts to take credit for every good or major scientific and political advancement the world has seen since 1950... without actually lifting a finger to do anything real in the world other than the word salad that has poured out through his keyboard into the pages of this audiobook.

there should be laws against this kind of nonsense.

what's tragic here is this has the makings of potentially being an excellent science fiction series...