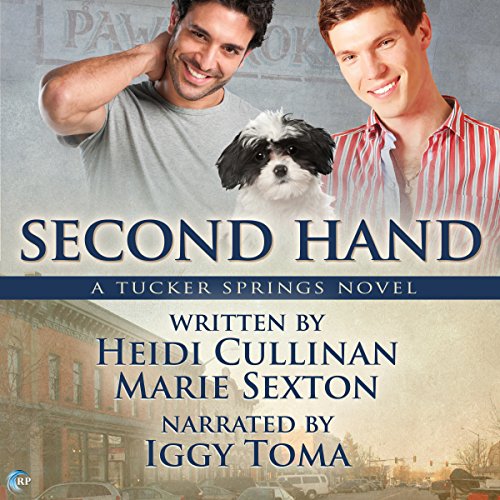 By: Heidi Cullinan,Marie Sexton
Narrated by: Iggy Toma
Try for £0.00

Paul Hannon moved to Tucker Springs for his girlfriend, but she's left him with a house he can't afford and a pantry full of useless gadgets. All Paul wants is to get back to normal, even if he's not sure what that is anymore. When he wanders into Tucker Pawn for a gift to win her back, he meets El Rozal, pawn shop owner and all-around cynic.

El Rozal doesn't do relationships, especially not with clueless straight boys still pining for their ex. El may make his living dealing in castoffs, but that doesn't apply to men. Still, when Paul starts clearing out his old life, pawning kitchen equipment he never wanted in the first place, El is drawn to Paul in spite of himself.

Paul and El have nothing in common except a past full of disappointments. There's no reason to believe the two of them could fit, but in El's line of work, one man's junk is another man's treasure. When it comes to love, El and Paul may learn that secondhand doesn't mean second best.

Publisher's note: This novel is part of the Tucker Springs series, which do not need to be heard in order.

What listeners say about Second Hand

I always enjoy this authors work (Heidi Cullinan). The need to be loved is common to her stories and also requirement to love yourself. These both come across really well in this book. I wouldn’t rate it is the best book she’s written but I will no doubt listen to it a few times like I do to all her books!

There was nothing I disliked, Iggy Toma is a really good narrator, the story has a lot of humour and I never got bored.

I really like Iggy Toma's narration in this - he gives a solid performance, I like most of his character voices, and he sucked me into the story making me ignore the outside world completely. Which is a good thing. No matter what my boss or co-workers might tell you.

Second Hand is one of those stories that has a slow build-up to the romance. Mainly because main character Paul is one of the most clueless characters I've seen portrayed in a long time. Paul is also what I call a downer dude or an Eeyore. He's constantly dragging about lamenting his life and the choices he's made. It's hard for me to like a character like that very much.

Conversely, El, for all his chain-smoking and brusque ways, was a delight to get to know. The problems he faces with his family situation felt real, and were, I thought, handled well.

I like that the story has a slow build up to their relationship. I like the time it takes Paul to realize, and then comes to terms with, liking El in a romantic way.

What I didn't like is the ex-girlfriend and the drama she brought to the story. Whenever she showed up I was livid while listening; practically boiling over with rage.

I also didn't like the POV. Paul's POV is in first person while El's is third person. It was weird. I'm not sure if the weirdness was lessened or exasperated by the narration. I just know I didn't particularly care for it. It wasn't a deal breaker, but it did feel like two different stories mashed up into one book. Which, I guess if the two authors were penning different portions that makes sense, but I would have though it would come together more cohesively.

At the end of the day, though, it was an enjoyable listen with a sweet HEA and fans of Tucker Springs shouldn't be disappointed with this installment of the series.

What made the experience of listening to Second Hand the most enjoyable?

I didn't know what I was in for when I popped this in. I guess, based on the cover and blurb, I expected that it would be an ordinary, run-of-the-mill story about two guys falling for each other. That's not what I got, at all. It is a comedic delight. There were so many laugh-out-loud moments peppered through this movie, I swear I must have lost five pounds just from laughing so hard. It's such an enjoyable, refreshing, delightful story, that I just can't get the story and characters out of my head.

What other book might you compare Second Hand to and why?

I have no idea. Most of the M/M books I've read or listened to are paranormal romance, science fiction, or straight up drama. This was a comedy, unlike any I've read or heard so far.

Have you listened to any of Iggy Toma’s other performances before? How does this one compare?

This was the first one I'd heard from this performer, though he sounds very familiar. The first half-hour or so, I thought this was the same person who did the Camp Half Blood/Percy Jackson books.

Yes. If I described it, I'd be spoiling it and that's just wrong. So I'll hint and say it involves a cell phone and ring combination.

I see this is part of a series. I don't know if they focus on the same characters, but if they do, then they are a must-buy.

I think this is one of my favorite Tucker Springs stories. Oh how I love EL. Such a great character. Paul Is not quite as easy to empathise with, but still sort of endearing in his cluelessness.
EL threw so many hints at Paul who keeps obsessing over his ex girlfriend Stacey, It seems like it takes him a really long time, in fact most of the book before he realises and admits his attraction to Emmanuel.
Still a sweet story, Not much angst.
I feel like the ending Was a little abrupt, the conclusion came really fast, And I wish there had been something of an epilogue.
Iggy Toma is an absolutely incredible narrator. His expert narration really brings these characters to life, helps draw you into the story.

loved all the things about this book and audio. one of my top favs for sure

Iggy Toma created a random collection of voices and accents. And El’s accent changes from scene to scene. And the authors managed to make what could have been an interesting story about awakening to new experiences, both sexual (Paul) and romantic (El) into a boring underdeveloped story. Paul’s self loathing was so acute that it made no sense why El was attracted to him. Both the main characters seemed stuck in their lives and neither were interesting. I would not want to know either of these men. In fact after writing this I’m taking away a star.

Yard contests, pawnshops and Gay for you.

Paul moved to Tucker Springs for his girlfriends so she could sell her sculptures. when she found out he failed his vet school and got a job as receptionist, she found someone else. Someone she felt could help her make it in the art world. Down on his luck, Paul kept trying to win Stacy over. for her birthday, he went to the Tucker Springs Pawn to find a gift for her.
El was immediately taken by the cute, innocent young man.Straight man.
All Paul really wants is love and acceptance. to be able to make out in public, hold hands n public.

This was such a fun, romantic story. I loved how Paul was so clueless that El was taking thing just to see him, especially when he took the dog left on the vets steps for Paul. I loved the way El's friend chided him about Paul and the fun banter between El, his friend, and his family.

I love Iggy Toma. He can tell a story so well. His voice is nearly mesmerizing.

If you are looking for a fun,humorous romance, like bisexual men, Gay for you stories, cute dogs, gardening and an allover great romance this is the book for you. It's perfect for an afternoon of yardwork or housework. Plug in and let Iggy Toma tell you the story of El and Paul!

Yes, if you read first book and liked the style.

The audio book. The fact there were humorous moments.

Have you listened to any of Iggy Toma’s other performances before? How does this one compare?

Yes. He is always great. Love his voice.

If you could take any character from Second Hand out to dinner, who would it be and why?

Paul visits El’s pawnshop hoping to find a present to win the heart of his girlfriend Stacey. The fact that he’s in a pawnshop trying to win his girlfriend should tell you a bit about how confused poor Paul really is.

El is this eccentric, smoking, sensual guy who intrigues Paul right from the start. His life is totally different from Paul’s and he’s far more “worldly”.

The two end up striking up a relationship despite the odds and finding that they have something between them worth exploring.

There are some “growth” moments for El and Paul desperately needs the guidance El provides. I liked El a lot, and though Paul was a bit bland, he was a nice foil for El’s eccentricities.

I think the love story between El and Paul was so very sweet and sentimental and though I wanted to shake Paul on occasion I applaud the authors for not dragging the Stacey issue out too long, once El and Paul had gotten together.

There is a bit of humor and a gentle love story here that most people who like these authors will enjoy and the story introduces several of the characters from the other books in the series, so fans of the series will also really enjoy that aspect of this book.

I like this series for it’s use of non-traditional MCs and the way it demonstrates how different types of relationships work for different couples.

Both Marie Sexton and Heidi Cullinan are amazing writers and as such it’d be hard to find something they wrote together anything but wonderful.

Iggy Toma narrates several of Heidi Cullinan’s books and always does a really nice job. His voice is easy to listen to and he modulates the rhythm of his narration to really add depth to the story. I LOVED his accent for El. He totally made this book!