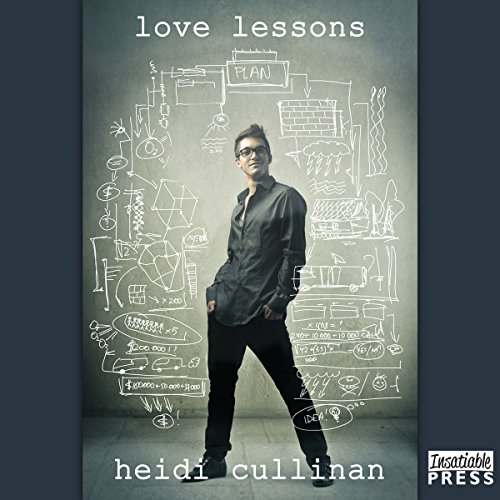 By: Heidi Cullinan
Narrated by: Iggy Toma
Try for £0.00

Love doesn't come with a syllabus. Kelly Davidson has waited what seems like forever to graduate high school and get out of his small-minded, small town. But when he arrives at Hope University, he quickly realizes finding his Prince Charming isn't so easy. Everyone here is already out. In fact, Kelly could be the only virgin on campus. Worst of all, he's landed the charming, handsome, gay campus Casanova as a roommate, whose bed might as well be equipped with a revolving door.

Walter Lucas doesn't believe in storybook love. Everyone is better off having as much fun as possible with as many people as possible - except his shy, sad little sack of a roommate is seriously screwing up his world view. As Walter sets out to lure Kelly out of his shell, staying just friends is harder than he anticipated. He discovers love is a crash course in determination. To make the grade, he'll have to finally show up for class - and overcome his own private fear that love was never meant to last. Warning: This story contains lingering glances, milder than usual sexual content for this author, and a steamy dance-floor kiss. Story has no dairy or egg content, but may contain almonds.

What listeners say about Love Lessons

There were times when I thought the audio book dragged and I wished certain scenes had not been included. The Williams' storyline I found hard to accept.

Having said that, there were some lovely moments between Kelly and Walter. I loved when these two had intimate and sexy moments, but always worried (just as Kelly did) that Walter would go all weird afterward and withdraw. I suppose that was all part of the tension, but even so, it took well over half the book before they even kissed.

Love Lessons is a masterpiece in sexual tension and emotional realism. It is unbelievably sexy whilst containing very little actual sex.The emotional progression between Walter and Kelly felt natural. I didn't feel hit over the head with sentimentality but my heart was slowly ripped out by Walter's generosity and vulnerabilities and sweet Kelly's quiet strength. The book is so well written, it has the best description of a man realizing he's in love I have ever read/heard, and Iggy Toma narrates the whole thing excellently to me he is Walter. In short GET IT GET IT GET IT GET IT.

This was really a pleasure to listen to. It is one of those stories where you have a smile on your face most of the time you are listening to their story. The narrator did a wonderful job of bringing Walter and Kelly to life. This is a very sweet story that is a little darker than you expect. It starts off as the openly gay college playboy meets the super shy, gay freshman that has massive allergies and loves Disney movies. The slow build up and angst of their romance is just right. We learn that even though Walter appears in control, he has demons to fight, a la his messed up family life. And although Kelly's Disney princess view of the world seems unrealistic, he has some steel in his spine when it comes to Walter. No real drama, just a sweet story. Definitely worth a credit.

Seeing what's in front of you...

I really enjoyed this story. The narrator brought the characters to life and I became engaged in the story of Kelly and Walter. Though at times I wanted to smack Walter upside the head, I understood the aspects of his life that resulted in his perspective on love as a lasting and true construct. A very nice, sit down to relax story with a happy ending...

This book was sweet and cute but I wanted a little more steam. It is written in the 3rd person which I am realizing I don't get pulled into the story as much when it's 3rd but I still enjoyed it. The couple was great and even though I'm not a fan of Virgin story lines this was realistic and that made it all better. Starting book 2 right away!

The narration is great! I have a hard time with most narration on MM audiobooks and Iggy Toma is on my very short list of favorite MM Narrators.

This was one of my favorite ebooks last year.

What did you love best about Love Lessons?

I originally bought this in ebook format and read it last year. I loved Kelly Davidson and his unabashed love for Disney movies because that was something I'd never encountered before in a male character. It made the character cute, and endearing for me.Walter Lucas, however, reminded me a lot of myself. Even his favorite movie (The Fight Club) was also one of my favorites. He's cynical, and yet a complete romantic. I love how he tries (unsuccessfully) to hide his vulnerability, and how he takes care of the people he loves.

I liked that it was about two people falling in love, in a normal setting, with no over-the-top drama and purple prose. And I liked how Heidi Cullinan was able to convey both Kelly and Walter's feelings through the narrative. The first time Kelly realized he wanted Walter, I could actually feel his yearning. When they were dancing and Walter was working up to kissing Kelly, you could feel their anticipation and nervousness, I could even hear the music in my head.

Did Iggy Toma do a good job differentiating all the characters? How?

Yes, it was easy to tell who was speaking since he gave them different voices. Wasn't too crazy about his voice for Walter, though, because it sounded rough to my ears at times. And initially I thought (when he was reading the narrative) he sounded too stiff and formal, even had a slightly angry/curt tone.

If you could take any character from Love Lessons out to dinner, who would it be and why?

Kelly Davidson. He is just completely adorable. Genuinely nice, polite, a ray of sunshine. As Walter described him -- a happy-seeking-missile.

I couldn't help but wish that this had been narrated by Jason Frazier because he would have been perfect for this book. He'd be perfect for Fever Pitch (Love Lessons book 2), too.

This is just a very sweet, lovely, gentle love story. Though it doesn't have the grittier edge of most of the other Cullinan stories I've loved, it still had the heart and longing.

Iggy Toma's narration is perfectly paced and suited to the story whether the sweet or heated times.

One of the things I absolutely love about this is Kelly is such an unapologetic Disney princess. The in depth analysis of the different Disney animated movies was brilliant and oh-so-entertaining.

Walter and Kelly are so good together and they just make my heart melt.

If you could sum up Love Lessons in three words, what would they be?

What was one of the most memorable moments of Love Lessons?

I love how Kelly's family rallied around Walter when his own family let him down.

What does Iggy Toma bring to the story that you wouldn’t experience if you just read the book?

He has a soothing voice that's very easy to listen to.

If you could rename Love Lessons, what would you call it?

Anyone, if you're paying attention to these reviews, please make Heidi's entire catalog available through Audible. Her books are wonderful and in my opinion, way overdue for a good listen.

A lot of angst

In this series of 3 books, I happened to read this story last. If I had read it first, as written, I would not have bothered to read the other two, which would have been a real pity as they were truly awesome. This book was not. This story was way too angst filled, which slowed the story down and it was not nearly as interesting or engrossing as the others. They were more than awesome and I highly recommend.

If you could sum up Love Lessons in three words, what would they be?

What other book might you compare Love Lessons to and why?

This author reminds me a little of ZA Maxfield. The stories are as well crafted, the characters likable and believable, and the dialogue is SO SO good. By the time the two main characters got around to exchanging endearments it felt as natural as breathing. Too many authors rush through the relationship stuff or trade it off for sex. This was a brilliant balance of each.

OMG the reader is perfection. I got lost in the story because the pacing and flow were so well done.

I could not stop listening to this book. It wrecked my schedule for two-three days. I regret not having more discipline.

I have added a new favorite author. You may proceed to ruin my life, Hedi Cullinan.

Well written charming and smart story. I enjoyed it thoroughly. The narrator was awesome, bringing life to all of the characters.

Such a great well written book. Give this book a listen. You won't regret it.