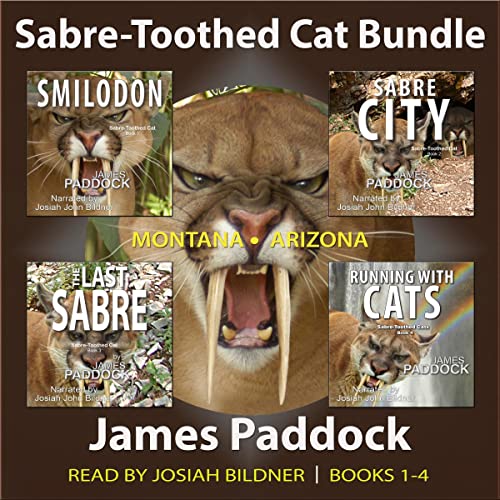 By: James Paddock
Narrated by: Josiah John Bildner
Try for £0.00

Listeners of Zach and his family have enjoyed this series....

Imagine recreating the saber-toothed cat for fun? The possibility sounds exciting, but the reality could be nightmarish. Within these pages you are drawn into in a world where man becomes the hunted. It is fast-paced fiction where cats change the rules and people run for their lives. “Tigers in the Wild” and a lucrative fee lure freelance writer, Zechariah Price, into the frozen mountains of Montana. The assignment drops him into a world of Bengal tigers, illegal aliens, prehistoric sabre-toothed cats, psychic premonitions and babies. As death by man and animal surrounds him, he quickly learns that he, too, is destined to become food for the cats. Trapped between man and beast, his assignment turns into that of survival. Welcome to a world where cats call the shots.

After eight years Zechariah Price assumes it is all behind him. Nightmares filled with huge sabre-toothed cats and women screaming still leave him in cold sweats, though less often. He had lost an eye the first time around; Tanya had fractured her back; their marriage had petered on the brink. There was no way he or any of his family was going to set foot in that Montana wilderness again. His 16-year-old daughter, however, decides otherwise and, in hopes of finding out what all the fuss was about when she was just a child, runs off to visit a Montana woman she found in a chat room. She discovers a lot more than she could have imagined, including who her father really was and how much she had inherited from him.

Three weeks after her mother’s death, Rebecca (Reba) Price cannot stand the oppressiveness filling her Texas home. Her sister, aunt and maybe even her father blame her. She cannot disagree. Hacking into her father’s accounts she takes what she sees as her rightful inheritance and escapes to school in Montana. She convinces herself it’s not to be near where her mother died nor near the sabre-toothed cats. However, as her freshman year ends, she is drawn back into those mountains, only to discover that the plot, which drove her mother to sacrifice herself for her family, is alive and well. As the body count rises--human and sabre-toothed feline--Reba must call upon all her inner power to find a way to bring it to a final end.

Three women in black gaze over Zach’s memorial in Texas and then again later in Montana as they prepare to mix his ashes across Lake Tanya so that the two, Zach and Tanya, can finally be back together. It’s the events in between that have daughters, Reba and Christi, wondering if they’re on the road to becoming old maid cat sisters. Then Jaxton and Myranda Burchfield knock on their door wanting help in finding out their origins. Were they two of the cloned babies born in the bowels of Sans Sanssabre in the early nineties? Also, what happened to Lance Evans, Sans Sanssabre’s second in command? What happened with the property after the company went up in flames? “Take us there,” Jaxton says while placing a jaw-dropping amount of money on the table. Christi is excited for no other reason than Jaxton is fine looking and has his own Gulfstream. As far as Reba goes, she’s not excited at all. It’d mean two things. First, she’d be returning to where Smilodon still lives, the Sabre-Toothed Cats that at one time viewed Reba as their “queen”. So what if there were Blackfeet in her family tree. That was five generations back. There was no way she was the Spirit of Knifetooth Running Cat that was coming to take back the Blackfeet land."

Not what I was expecting

I didn't read the blurb, so I was expecting a sabre tooth blood fest.
I was surprised that book 1 wasn't what I expected but is a really good thriller.
book 2 another thrillerish
book 3 wandered into a bit of a YA paranormal
Fortunately book 4 tied up all the questions.
Yes there are sabre tooth cats but no b movie blood bath.
All in all definitely good entertainment.

Smildon: I totally enjoyed this book! It was full if intrigue and betrayal. A secret organization in Montana has hired a journalist to write about them,but why? People go missing or end up dead. Such nice kitties! Josiah John Bildner was a very good narrator.

I loved the first book. I felt not so positive about this one. Zach and Tonyas teenage daughter runs away to Montana to find out what really happened when her parents were hurt. She has been chatting online with a woman who will give her a place to stay.The woman's not supposed to be alive. 'Rebas' visit causes so much chaos that people are left dead .It seems everyone has the 'visions, sight' whatever. It was more comedy. The same narrator did a crazy voice for her and himself which he stuck to.It sounded like he was drugged for any guy voice.I don't know what happened. Reba ends up'Queen of the sabre toothed cats'

The Last Sabre: This book was better than book 2. "Reba' decides to go to college in Montana with the money she got from her mothers will. Her mother died less than a month ago, in Montana and her father is against that. She sneaks out. She has a habit of doing this. She settles into college, avoiding people so her 'abilities' aren't noticed .She has esp,etc.She stops a girl from committing suicide and they become friends. On a hike,Rebas 'cats' come to visit her. They need her help so ,of course she treks to the place her mother died and more people died by smildon attack.It is a good story. I think the narrator should have been changed in the second book so he doesn't sound so goofy doing voices.I loved him in book 1.


Bk 4: Running with Cats: The fourth, and last book in this series was good. Once again Reba and family end up on the grounds that once held Sans San sabre. Approached by 'twins' that were actual cloned babies from the place, and offered a lot of money, the girls head back. What they find is trouble and they escape, until their Aunt is kidnapped. In the end there is a Blackfeet pseudo legend(Blackfeet ancestry here'll) and a double rainbow! Narration by the same guy was back and forth in this one.
I was given this free review copy audiobook at my request and have voluntarily left this review.' ...

Each book is more horrific and fanatacical magic than the previous one. I was drawn into this dark paradigm that the author created and became invested and entrenched in the story. Eileen was beyond selfish but she did grow. Zack had no will power and needed a swift kick several times. Reba had major impulse control problems, that became a problem for many. but she grew quite a bit. Reba's gradual transformation and powers were exciting and intriguing. By book 3. I was turning against Zack for the way he talked to Reba and his actions with Aunt Susie. I actually threw up a bit in my mouth, because I felt so violated and betrayed after all his previous rants about her!!! I'm sickened. Susie still made me feel icky to the very end-too slimey for me. Mandy was an opportunist imo. Reba saved her from herself and she stole Reba's heart!!!! Matt was a typical clueless man,as usual. For some reason, the ending made me very sad for the cats.. This was a very stimulating set of reads.I voluntarily listened to a free copy of this and am giving an honest review. The narrator did a good job bringing it to life.