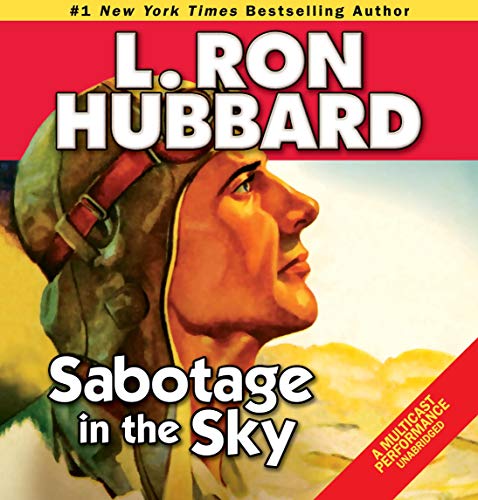 Sabotage in the Sky

Bill Trevillian is as ruggedly handsome as he is bold and brave. Kip Lee is as strikingly beautiful as she is fiery and fearless. And they’ve got something in common. They’re both test pilots...for rival aviation companies. Put them together and, like a young Tracy and Hepburn, sparks are bound to fly.

The Second World War is raging in Europe, and England and France are looking to America for a fighter plane to match up with the superior Nazi Messerschmitt. The competition between Bill and Kip is fierce, and the stakes are stratospheric. Because there’s an added element in the mix: a deadly saboteur.

People say all’s fair in love and war, but when there’s sabotage in the sky, the flight path from heated rivalry to heated romance could lead Bill and Kip to crash and burn.

"If you crave air adventure written by an airman who knows what a hot plane can do, don’t miss Sabotage in the Sky”, wrote the editor introducing the story in 1940. And Hubbard’s knowledge proved prophetic - unknown to the FBI, the German intelligence service, the Abwehr, was actively gathering intelligence about American military aircraft designs and manufacturing. The author also had personal aviation experience, earning a reputation as a daredevil pilot barnstorming across the United States, landing in farmer’s fields and skimming over the top of telephone wires - experiences he put to good use as a well-known aviation correspondent and one of the most accomplished writers of aviation adventure.

What listeners say about Sabotage in the Sky