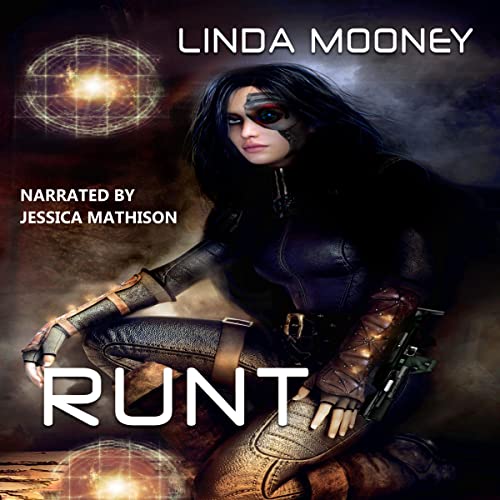 By: Linda Mooney
Narrated by: Jessica Mathison
Try for £0.00

Waking up disoriented, she doesn’t know where she is, or who these men are who are talking over her…about her…about her being their creation. Apparently they ran out of parts, but she turned out okay, if not a little on the small side. Being dubbed Runt, she soon learns these men are not friendly, and she’s about to be sold to the highest bidder. From what she overhears, she fears the new owners will be crueler than her creators.

Runt doesn’t speak much, not wanting to give anything away, but she soaks in everything around her, memorizing everything she witnesses. Planning her next move for freedom. She’s alive, a special creation, and she will live the life she was created to have. She just has to bide her time until the opportunity presents itself.

When her escape attempt goes awry, she’s rescued by Axel and his crew of salvagers, but it’s hard for her to trust anyone. He tries to earn her trust and claims he cares for her, but how? She’s mechanical, a cybie. But Axel proves that she’s human enough where it counts—her brain and her heart. He makes her feel emotions foreign to her, like happiness. Of all the things she’s learned, learning to love is the most important.

Still, something plagues her. Who was she before she was Runt? Memories and flashbacks tell of another life, and she needs to find out what happened to her.

What listeners say about Runt