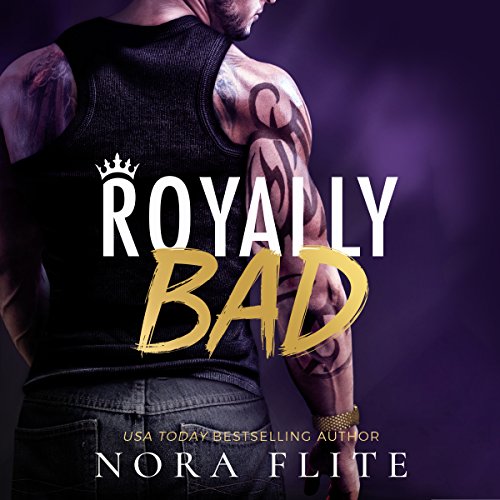 By: Nora Flite
Narrated by: Kendall Taylor,Jeremy York
Try for £0.00

Getting close to an arrogant bad boy like him is dangerous. Too bad it's her only choice.

Kain Badd looks great on paper: rich, handsome, and he's even a prince. But after spending a few minutes together, Sammy sees the real him - arrogant, possessive, and too hot for his own good. If she hadn't agreed to help plan his sister's wedding, she could have avoided him. Instead, she's waking up in his bed after an unforgettable night she definitely wants to forget. But he won't let her.

When Sammy thinks her life can't get any crazier, the wedding is raided by the police, and she spends her first-ever night in jail. The irresistible Kain isn't just bad in name - his family is connected to a dangerous underworld. Now she's mixed up in a power struggle between his family's empire and their rivals. She has no choice but to put herself back in this filthy prince's extremely capable hands.

Sammy must trust Kain to keep her safe. She's just not sure she can trust herself to resist temptation.

What listeners say about Royally Bad

If you could sum up Royally Bad in three words, what would they be?

What does Kendall Taylor and Jeremy York bring to the story that you wouldn’t experience if you had only read the book?

The audio helped the enjoyment of the book. The different voices helped differentiate in the chapters.

This is the first book in the Bad Boy Royals Series. This Romantic Suspense is entertaining, fast-paced and action-packed. The storyline is filled with a suspense, but also a lot of steamy scenes. Some scenes are also really funny. Kain Badd and Sammy share an instant attraction and their chemistry is strong. Sammy is a strong, independent and feisty woman, who cares about her mom. She's also a little reckless. Kain is a bad boy prince, rich and handsome. He's strong and very possessive and protective with Sammy. His family controls the town and they are connected to a dangerous underworld. Sammy get trapped between Kain's family and their rivals. Sammy seems to have no idea where she has set her foot. At first, I didn't really like Kain, but my mind changed along my listening. I like how the author has build this world. The Secondary characters are also very interesting: Sammy's Mom (she's hilarious!), and Kain's Brothers (Costello and Hawthorne) and their sister! I can't wait for the next book in the Series, Costello's story. This was my first listen to Kendall Taylor. She has a great voice. Jeremy York is one of my favorite narrators. He has a sexy and beautiful voice. The narration was well done and easy to listen. I really enjoyed my listening.

I love this book it was really good but I want expecting it to be so sexual Lol not something to listen to in front of kids!

Need I say more than it was royally bad? I can count the number of books I've skipped through or not finished over the past few years using my fingers, and this book made the list. Honestly, I wanted to like it but it felt absolutely unbelievable with unauthentic characters. There were so many moments that just weren't pulled together right. I just cold not relax into the story, and can't recommend it to others.

What would have made Royally Bad better?

Has Royally Bad turned you off from other books in this genre?

book would not play

I have other books and I am able to listen to them perfectly, but this book kept buffering

Not as Bad as I wanted

Although I enjoyed listening to this book I really wish that Kain was badder. He was not a leader or a self-made badass. He reminded me of a little kid. The dad is definitely in charge here. I wonder about the oldest sister too. I'm going to read the next book to see if it gets better but if not I'll probably stop listening at book 2.

The plot was good with lots of suspense. Kain and Sammy were likeable characters and the Badd family were interesting. The romance of the story was a little too slow and bland. There were so much going on behind the scene which overshadowed the romance development. The narration by Kendall Taylor and Jeremy York was great which made a great listening experience.

Wow what a book! I totally recommend this book. It is worth the credit. Let me tell you!!

This book was enjoyable steamy love story. Overall it was good, even if plot left questions and sometimes felt little slow. But I liked the main characters and their crazy love story. Performance was good. This is good relaxing book to pass your time or to relax. It will not rock your world, but it gives you great way of escaping your everyday life.

Good book to just kick back ,relax and listen to the narrator's bring such life to the main characters

Normally I read my books myself but I developed an eye problem that damaged my corneas. Since I can't read as much as I did before I decided to give an audible book a shot . Since I'm already a prime member. I figured why not download a free one from the prime reading list. This book was the perfect one for me to try. It's a great listen!! The two main characters have amazing chemistry together. The story throws you a plot line that you don't see coming until almost the last few chapters. As an extra bonus it has two perfect narrator's that bring every character to life not just the two main characters of Sammy and Cain. I finished it off in one day listening to it in two sittings. A good guilty little pleasure worth the read or listen. First time I've read a work by this author but I'd read something of hers again. The characters are very interesting and the chemistry of the main characters is amazing.