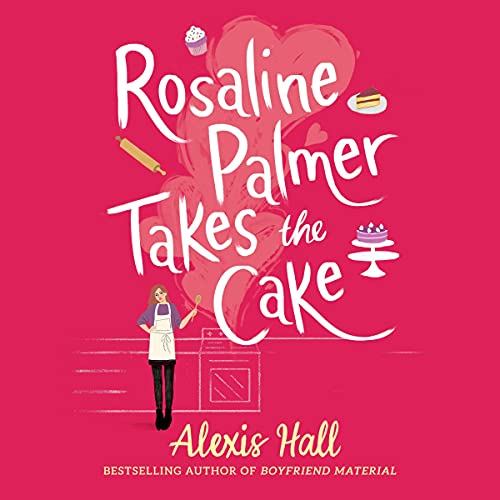 Rosaline Palmer Takes the Cake: by the author of Boyfriend Material

By: Alexis Hall
Narrated by: Fiona Hardingham
Try for £0.00

We Are Bookish: Spring Releases to Have on Your Radar

A delicious romantic comedy by the best-selling author of Boyfriend Material, perfect for fans of Casey McQuiston, Christina Lauren and Abby Jimenez.

As an expert baker, Rosaline Palmer is a big believer in always following the recipe. She's lived her life by that rule - well, except for when she dropped out of college to raise her daughter, Amelie. Now, with a paycheck as useful as greaseproof paper and a house crumbling faster than biscuits in tea, she's teetering on the edge of financial disaster. But where there's a whisk there's a way...and Rosaline has just landed a spot on the nation's most beloved baking show.

Winning the prize money would give her daughter the life she deserves, but more than collapsing trifles stand between Rosaline and sweet, sweet victory. Suave, well-educated and parent-approved Alain Pope knows all the right moves to sweep her off her feet, but it's shy electrician Harry Dobson who makes Rosaline question her long-held beliefs - about herself, her family and her desires.

Rosaline fears falling for Harry is a recipe for disaster. Yet as the competition - and the ovens - heat up, Rosaline starts to realize the best quality bakes come from the heart....

"The writing is witty, and [the] chemistry is irresistible, but it's Hall's insights about trust and self-worth that set the story apart. This is a triumph." (Publishers Weekly)

"A tasty tale that most Bake Off fans could get their teeth into." (Sunday Post)

What listeners say about Rosaline Palmer Takes the Cake: by the author of Boyfriend Material

Quit funny in places, quite enjoyable listen. Narrator is great. Would recommend, but its not worth the credit.

Another hit from Alexis Hall!

I loved Boyfriend Material and thought to give this book a try due to that. Honestly not what I expected at all and it was very good! I raced through it and absolutely loved it! Would recommend to anyone who enjoys good LGBTQ+ representation and heartwarming romances

Though not quite as good as Boyfriend Material, it’s wonderful for what it is: a LGBTQ bake-off fan fiction with extra depth that does not back down from difficult subjects.
For me, it was perfect!

It's been months so the details have a faded a little but the utter joy of listening to this book is still as fresh as one of Rosaline's cakes!
Alexis Hall writes layered characters and wonderful stories.

Not to be missed!

I patiently waited for the release date knowing Alexis Hall would not disappoint. awesome characters as usual, the humility is great. Actually laughed out laud ... on a train... surrounded by bemused business types. the narration is spot on. if you enjoyed boyfriend material, Glitter Land and Waiting For The Flood, you'll live Rosaline's story.

This book is perfect! Honestly I loved everything about it. It’s low angst but not boring. It brings to life the GBB with out being GBB. Rosalind Palmer is fantastic but it’s the side characters that bring this book to life. Another brilliant book by Alexis Hall