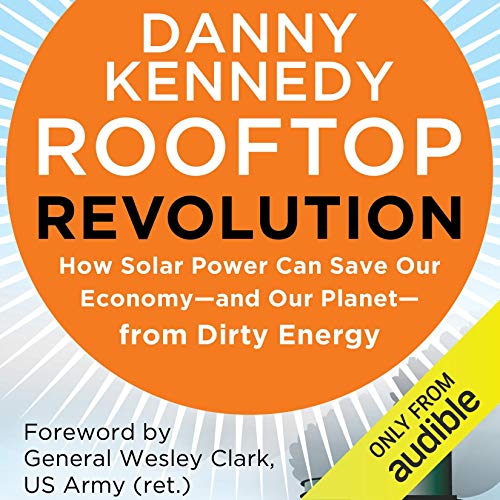 By: Danny Kennedy
Narrated by: Kevin Pierce
Try for £0.00

The Biggest Untold Economic Story of Our Time

Here is the truth that the powerful Dirty Energy public relations machine doesn't want you to know: the ascent of solar energy is upon us. The production of solar-generated electricity has risen exponentially in the last few years, and employment in the solar industry has doubled since 2009. Meanwhile, electricity from coal has declined to pre-World War II levels as the fossil fuel industry continues to shed jobs.

Danny Kennedy systematically refutes the lies spread by solar's opponents-that it is expensive, inefficient, and unreliable; that it is kept alive only by subsidies; that it can't be scaled; and many other untruths. He shows that we need a rooftop revolution to break the entrenched power of the coal, oil, nuclear, and gas industries. Solar energy can create more jobs, return our nation to prosperity, and ensure the sustainability and safety of our planet. Now is the time to move away from the dangerous energy sources of the past and unleash the amazing potential of the sun.

What listeners say about Rooftop Revolution

This book was a fantastic eye opener and an education on the solar opportunity. It was very well written and narrated - I simply could not put it down.
Danny, you've turned me into a revolutionary in one read (or should I say in one listen).

While the author has terrific points and I believe solar generation is necessary, his viewpoint is a bit sarcastic. He would have won me over more if he had made his points from more over an intellectual rather than condescending manner.

Would you recommend Rooftop Revolution to your friends? Why or why not?

I would not recommend this book but do recommend readers understand the value of solar generation.

Was Rooftop Revolution worth the listening time?

Unfortunately, not for me. I did not finish the book. However, I did gain some minimal value.

Nothing but sales job.

Would you ever listen to anything by Danny Kennedy again?

What character would you cut from Rooftop Revolution?

When considering solar - listen or read this book! I plan to buy hardcopies for gifts.

I read this book recently after the bankruptcy of Sungevity. The book really indicates solar is the future and I do believe that but then even with great vision and ambition it still manages to fail. I believe Dan Kennedys heart was in the right place but now we will have to look further into the demise of this company. Was it greed, poorly managed, or is it that solar is not as profitable as indicated in this book. Maybe just maybe King Kong has won again. Only time will tell.

Impressive book, recommend for anyone looking to learn more about solar and energy in general.