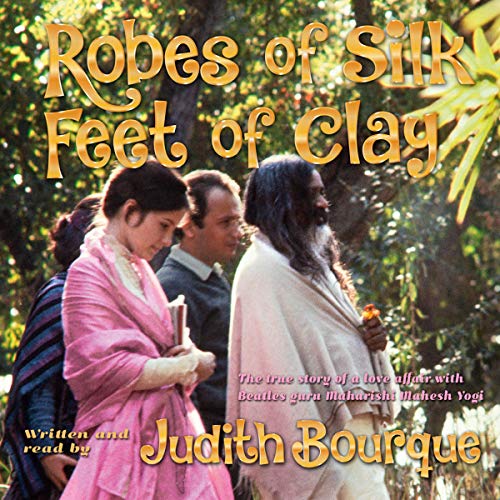 Robes of Silk Feet of Clay

Maharishi Mahesh Yogi was the charismatic leader of the Transcendental Meditation movement and known internationally as the Beatles' guru. After John Lennon and George Harrison suddenly left Maharishi's India ashram retreat in 1968, rumors have persisted that the spiritual leader made advances toward young women which overstepped the boundaries expected of a celibate Hindu monk. In disillusionment, Lennon concluded his stay at the ashram by writing "Sexy Sadie". He wanted to use Maharishi's name but changed the title of the song at George Harrison's request.

Robes of Silk Feet of Clay reveals the true story of a young woman's love affair with the powerful guru. Just out of college, Judith Bourque went to India to become a teacher of Transcendental Meditation (TM).

"I expected to have a deeply profound spiritual experience with a living prophet...what I got was a decidedly human one!"

Maharishi told her not to tell anyone about their relationship, and she didn't...not until he died in 2008. Judith first came out of the closet in David Sieveking's David Wants to Fly, a full-length film documenting the German filmmaker's experiences in learning TM.

"After that interview I felt I needed to share the whole story of my relationship with Maharishi in my own way, and finally decided to write my book."

What listeners say about Robes of Silk Feet of Clay

An honest story from a brave woman

This is an important book. Judith Bourque has written an honest account of her romantic relationship with her guru, Maharishi Mahesh Yogi. There is a fine line between devotion to your guru and romantic love. To cross that line is frought with danger. There is a long list of gurus from India, as well as from other Asian countries, who came to America and were seduced by fame, fortune and sex. This is not to discount true gurus who exemplified honesty and integrity. I know that Judith Bourque's account is honest because first of all she relates it without malice. Secondly, her story has been confirmed by others who were there and by other women who also had intimate relations with Maharishi. This well written book will help many women who went through a similar experience and hopefully will warn other young women who could find themselves on the verge of beginning a sexual relationship with their teacher. Of course, whenever revelations regarding famous guru's sexual affairs surface there are always "true believers" who deny the truth and then attack the truth teller. This is a pattern that has repeated itself over and over again. Those who put their guru up on a pedestal and believed that they were perfect are usually unable to admit that their "perfect guru" was human and had weaknesses. As the title of the book aptly states, "Robes of Silk, Feet of Clay." I enjoyed this book tremendously because I too was a devoted disciple of Maharishi and a full-time teacher of Transcendental Meditation for 10 years. I am still grateful for what Maharishi taught me. It changed my life for the better. I now accept his humanness and rejoice that truth shall prevail. I applaud the author for having the courage to tell her story honestly. May it benefit many.

An excellent, frank & insightful book about the author & Maharishi Mahesh Yogi, guru to the Beatles.

I wanted to hear the authors story and appreciated your willingness to share it. A better selected narrator would have made a tremendous difference in my listening experience.

Incredible story. I totally believe it. I have had my own experiences with so-called holy men.

There was nothing interesting about this at all other than she had an affair with Marahrishi. Nothing insightful. Her narration was okay. I quit with one hour left.