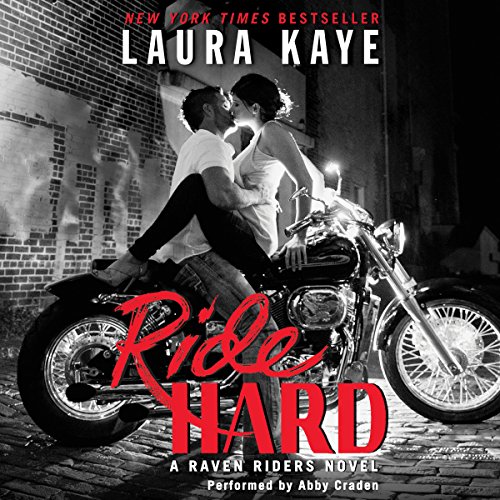 They live and ride by their own rules.

These are the Raven Riders....

Raven Riders Motorcycle Club president Dare Kenyon rides hard and values loyalty above all else. He'll do anything to protect the brotherhood of bikers - the only family he's got - as well as those who can't defend themselves. So when mistrustful Haven Randall lands on the club's doorstep scared that she's being hunted, Dare takes her in, swears to keep her safe, and pushes to learn the secrets overshadowing her pretty smile.

Haven fled from years of abuse at the hands of her criminal father and is suspicious of any man's promises, including those of the darkly sexy and overwhelmingly intense Ravens' leader. But as the powerful attraction between them flares to life, Dare pushes her boundaries and tempts her to want things she never thought she could.

The past never dies without a fight, but Dare Kenyon's never backed down before....

What listeners say about Ride Hard

An avid fan of the Hard Ink series, I was happy to see that all my favourite characters had cameos in the Raven Riders series. It appears that the Raven Riders, led by Dare, are not bad badass bikers, but that they're good, badass bikers. They rescue damsels in distress, and Haven is just that, a damsel in distress. Treated horrifically by her gangster father, she runs away. With a $100,000 bounty on her head it wasn't going to be long before she ran into the wrong kind of people. Saved by my wonderful, Hard Ink guys, she takes refuge with The Raven Riders, welcomed as one of their own. Life is starting to look up for the gorgeous blond bombshell, who by the way is also beautiful on the inside. It doesn't take long for the smoking hot President of the MC to notice Haven, and despite the 15 year age difference a relationship blossoms. Can Dare keep Haven from any further harm and still maintain club business with her in his life? I loved this story, the writing, the characters and the dual POV. The chemistry was perfect.

I liked this book it held my interest with a good story , however not so keen on the narrator but once I got past this it was a decent listen , saying that that narrator tried hard with different voices for different people maybe it's just me...

The start of yet another addictive series

The start of a new series with my favourite hard ink guys in a cameo appearance!! The story of Dare and Haven the hard rider and the quiet mouse - so different but with histories so alike - they deserve a HEA ....Abby Craden's narration was top notch. Looking forward to the next !!!

IT BUILT & GREW INTO 5* AWESOMENESS

I knew Laura Kaye was good after following her Hard Ink series but nothing could have prepared me for this awesome ride as she introduces you to the Brothers of the Raven Riders MC. At first LK introduces the cast of characters, outlines their backgrounds and describes the Club, it's motto, banner and beliefs.... all whilst she's also threading and easing the plot securely into place - that of Haven and Cora. Two young women who'd been on the run from abuse, mental cruelty and, in Haven's case, from her Crime Boss Father who'd kept her as his pawn, his possession, his prisoner... but never his loved daughter. Now, because of some 'shit out of luck' circumstances that led them to be penniless and kidnapped, the two women were cautiously optimistic, rescued and safe - protected by the Raven Riders but for how long because Haven's Father WOULD come.... it was just a matter of how and when.

Then, after LK had skilfully first done the groundwork and laid the foundations, she then went on to build the connection and growing attraction between Drew, the 37 yr old Club's ruggedly handsome but haunted President, and Haven, the shy timid 22 yr old beauty, who'd caught Drew's attention. And their journey to a HEA went from sweet and tender, through tentative and touching, veered into sinfully sexy, pit stopped at Crazytown where heartbreak, anguish, drama, bloodshed and death waited.... until they finally reached their destination - the flashing neon lights of a HEA ending.

I loved this listen and the time LK took to describe the characters, their personalities and backgrounds and the solid brotherhood vibe between each member of the MC and they weren't dirty talking 1%'ers with badass attitudes. Instead they were a caring, friendly and protective group who often rescued and relocated abused women, but don't get me wrong, they still wore cuts and shitkickers, had Club sweet bloods, did shady deals, had weapons, swore and rode Harleys. They reminded me of the Black Dagger Brotherhood (which is, IMO, high praise indeed) because you could feel the love, respect and trust between them and the 'all for one' attitude. Dare was charismatic, sexy, strong and thoughtful and Haven went from being a frightened mouse into a courageous deadly lion and together they saved each other. Dual POV's, great story that also drew in the Hard Ink men and a wickedly talented narrator because Abby Craden can do many voices, both genders, a sexy male voice and inject all the passion and emotion needed to push a great book into a truly captivating and riveting listen.

Worth a credit? One million x YES.... and, if you love good MC books as much as I do, then you too will find this creditworthy and I hope that this series will build, grow and go from great to legendary. And I can't wait to see who's next - because LK has outlined a few deserving characters who desperately need their HEAs too.

While the majority of Ride Hard was entertaining, there were several huge flaws in the plot that I found incredibly irritating.

1. The Ravens MC club supposedly sheltered abused women, helping them to escape and start new lives. While commendable, why would this same club treat most women as sexual commodities? Example: club groupies who are passed from man to man, expected to perform sexual services in public or with multiple men. It made no sense that men who did not respect or admire the female gender would spend time or money to help them.

2. The Ravens agreed to sell illegal, military grade weapons to a dangerous street gang in Baltimore, guaranteeing the senseless murder of dozens of innocent citizens. Then the Ravens held a racing event at their compound, attended by hundreds of families, knowing that violent criminals were coming to kidnap Haven, a woman in their care. Really?

3. Raven president Dare (39) and abuse victim Haven (23) were a strange, unbelievable couple. I don't like big age differences; when a man is old enough to be her father I find it too weird to be romantic. Why not a smart, competent woman his own age for Dare? Was Haven just going to trade one over-bearing male authority for another? Were Dare and Haven going to raise a family in a male dominated environment, where wives & girlfriends were considered property, not valuable human beings?

Although Dare and the Ravens were mostly protective and thoughtful, their chauvinistic club did not allow female or minority members. Why glamorize such narrow-minded beliefs?

I waited for the release of this book because I loved the Hard Ink series by Laura Kaye and this series promised to carry on with some of the characters. However, I was unable to get past the first hour of the book because of the terrible narration. In most cases, I can get past poor a poor narrator. But, not this one. Ms. Craden transition between voices was grating at best. The female voice sounded whinny and week and the male characters were made to sound like they had gone through a cheese grater. I can't even tell you how the story was going up to the time I stopped listening because of Ms. Craden's performance. These characters had been in the previous Hard Ink series and Ms. Valentine's performance was great. So, it leaves me wondering why a change of narrator?

I do hate giving such a poor review on a performance, but in this case it is warranted. I would return the book, but the return comes out of the author's pocket and the poor performance isn't the author's fault snd she shouldn't be penalized. In the future, I will note to not purchase any books with this narrator and save myself the misery.

A friend recently recommended this book to me, and I absolutely loved it! The female narrator does fantastic voices, from the shy, timid Haven and the brassy Cora to the baritone and gravelly voices of the bikers. The story is sexy, romantic, and suspenseful up until the last minute! I would recommend this book to my friends.

I didn't enjoy this book. The female voice was so annoying.this felt like a wasted credit.

I couldn’t listen to more than 5 minutes of this book. The narrator is terrible. I bought the Kindle version instead.

This is a beautiful unfolding of a story. It was in my wush list a long and I hate it took me so long to take a chance on it. You will not be disappointed. This book will take you on a tidal wave of emotions as the characters open up and allow you to see all they have gone through and survive to become the people they are. Well worth a credit or cash purchase.

I wasn't sure if I was going to love this new series as much as Hard Ink, but it is truly FANTASTIC! Loved the presenceof my Hard Ink faves as well.

love hard ink books can't wait for next book in this series to come out now!!!!😁

This is a great story with great characters and the right amount of heat. This is my first Laura Kaye book, but it’s safe to say that I’ll be back for more!