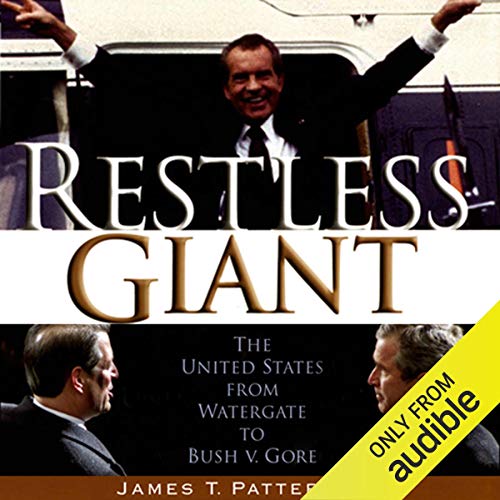 By: James T. Patterson
Narrated by: Robert Fass
Try for £0.00

Following up Grand Expectations in the Oxford History of the United States, Restless Giant provides a crisp, concise assessment of the 27 years between the resignation of Richard Nixon and the election of George W. Bush, in a sweeping narrative that seamlessly weaves together social, cultural, political, economic, and international developments.

In exploring a wide range of cultural, social, and economic concerns, Patterson and engrossing narrator Robert Fass show how the persistence of racial tensions, high divorce rates, alarm over crime, and urban decay all led many writers to portray this era as one of decline.

Restless Giant is the 11th volume of the Oxford History of the United States, which includes three Pulitzer Prize winners, a New York Times best seller, and winners of the Bancroft and Parkman Prizes. The Atlantic Monthly has praised it as “state of the art” and “the most distinguished series in American historical scholarship.”

What listeners say about Restless Giant

Patterson delivers here an analysis of US Politics from Watergate to the 2000 Election Debacle. Patterson does not isolate one Administration from another. Instead, he gives the impression of a continual flow of events, independent of each other, but linked nonetheless. I believe this work is also non-partisan, offering a balanced criticism of Democrat as well as Republican Presidencies.

Too Soon? Maybe, but still a good listen

History is best looked at from a great distance. We are still so close to these events that political passions can sway our opinions. Mr. Patterson does a fine job of chronicling this most recent period of our history, but I could not help but notice that he had a horse in the race. I am not saying that it is a bad thing or a good thing but that it just is. He may be a little too proud of his progressive cohorts, but I suppose he can't be blamed for that that. Having noted that, I enjoyed the book very much. Anybody who loves history will enjoy it as well.
The author touches on most of the important events during the period. The Nixon episode is very interesting. Every time I hear about it from a different angle I get just a bit better understanding of it. This book also shines a revelatory light on our world just before everything changed after 9/11. That alone made it worth the listen.

I was looking for more

Would you try another book from James T. Patterson and/or Robert Fass?

maybe , this was just an account of selective historical incidents , not much of analysis or insight

If you’ve listened to books by James T. Patterson before, how does this one compare?

If you could play editor, what scene or scenes would you have cut from Restless Giant?

thought i would learn more about the states

Why We are the Way We Are

Would you listen to Restless Giant again? Why?

Yes, to allow me to remember more of the information in order to help me teach it in my U.S. History classes.

How it allows me to better understand why we are in the state we are in.

The more things change, the more they stay the same.

A lot of things not made clear when I lived through this time period were revealed in this thoroughly researched history. Mostly from a political and government leadership point of view. Though it did cover trends of the days covered. Our ever dividing cultural identities seem to be driving us back to tribal dogmas thus beginning to lose our national identity.

Good Chronicle of the Time Frame

Like all of the books in the Oxford series this one gives a detailed coverage of the events within the time frame selected. There is always a challenge to writing history of events so near to the present but this author does well to not politicize the history covered.

Worth taking the time to listen! Informative and helpful in seeing not only the micro happenings, but the history and situation leading up to and allowing the presidents and their parties to exercise power.