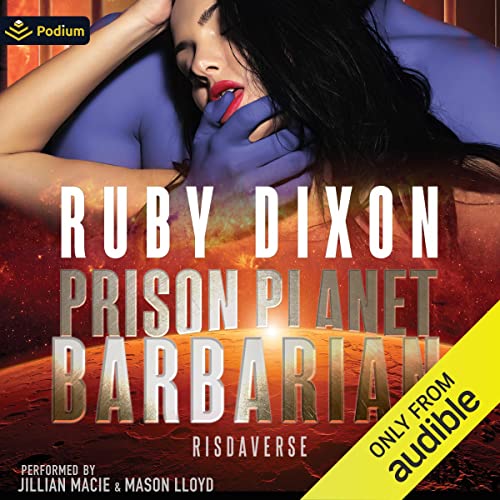 By: Ruby Dixon
Narrated by: Jillian Macie,Mason Lloyd
Try for £0.00

Here in Haven’s prison system, I’m stranded among strangers, enemies, and the most ruthless criminals in the galaxy. There’s no safety for a human woman here, especially not one branded as a murderer. I’m doomed to a fate worse than death.

Then, he decides I should be his.

His name’s Jutari. He’s seven feet tall, blue, and horned. He’s an assassin and one of the most dangerous prisoners here. He’s like no one I’ve ever met before…and he might be my only chance. This a a standalone story that is marginally connected to the Ice Planet Barbarians series.

Mason Lloyd is so superior!

Story is wonderful. Storytelling even better! Will be listening to this book again! Super obsessed!

Quite a twist on paranormal romance. Held my attention and was not too long or too short. Narrators did a good job with characters. Will follow the series.

I'm a RD fan. I have 20+ of her books and this is the first one I felt disappointed with. The story is so so and the characters are severely underdeveloped. Too many romance writers make the chick fall in love with the dude too soon. RD usually spends a lot of time developing the characters first... but this one felt too fast and sloppy. Prison break, they love each other, the end.

Okay for the jailbreak lol

But in real life . . . Noku irritated me and can get these hands! I hate males like him. Other than that, I loved reading Chloe and Jutari's story.

Excellent read. I thoroughly enjoy this series. Ruby Dixon’s style is light and well thought out. You can see her characters , the far away plants they inhabit and find themselves on. Worth the read.