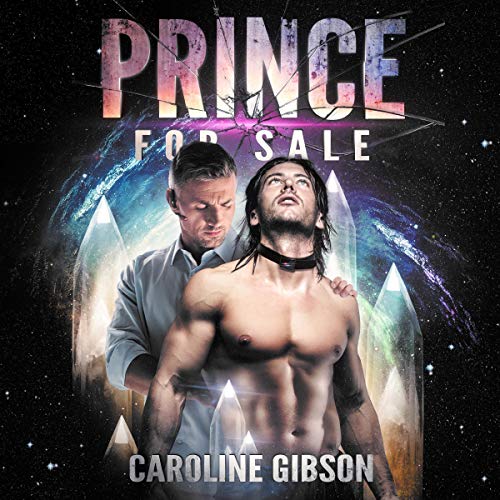 By: Caroline Gibson
Narrated by: Matt Haynes
Try for £0.00

David Thomen is Earth’s premier scientist, and he wants to be alone with his inventions, his money, and his PTSD. Instead, a mute, starving alien slave is dropped in his lap. Not just any alien slave - the leader of Earth’s first alien invasion, defeated by David's technology.

Vell was a prince, a conqueror, a warrior-mage. Now, he is bound by a magical slave collar that forces him to debase himself for the gratification of his master. On Earth, he finally finds someone who can see the torment behind his submission. Someone who may be willing to give him his freedom, his dignity, or even just a hot meal.

Unwilling to let Vell die, David begins a journey that will compromise his morals, challenge his scientific beliefs, and teach him about loyalty, brotherhood, passion, and love.

Note to listeners: This is an MM romance audiobook for mature listeners. It contains dubious consent, memories of past rape, and steamy, consensual sex scenes.

What listeners say about Prince for Sale

I went into this book totally blind without any expectations. And what a nice suprise it was! The story was captivating and original. Oh, and hot too! The narrator is good and I enjoyed listening.

I enjoyed this book way more than I expected to, and there was a good amount of plot. I saw another review before I read it saying that this paralleled the Avengers, if Tony Stark (Iron Man) got given the misunderstood villain turned slave, Loki, to look after by Loki’s brother Thor, and their relationship develops from there. It worked!

I'm not used to M/M books , but was intrigued by this so gave it a go . I'm glad I did . Good story , interesting idea and great characters .
Found myself laughing and crying at times , the scene with David high on a healing draft had me laughing !!
Have read book 2 , looking forward to book 3

Very nice fantasy of a collard slave prince plight for freedom or acceptance of his circumstances. The whole time your wondering what the prince really wanted or needed most. Freedom, love or both. Worth the credit.

the narrator was amazing! i first read this book and waited like a 2 year old in a candy store for the audiobook. it was well worth the wait. the story it self is charming with emotional ups and downs as you follow along. it also toes some visual issues but impressively manages to not undermine the seriousness of the events without making it depressing. i love the survive, drive on, and appreciate the good things even if they are small moments attitude.

It's rape, not dubcon. Lowest tier of bad fanfic

I went into this book prepared for a dark story. The blurb warns that there is dubious consent (which matches the alien tech slavery premise), and that it will also include consensual scenes (which matches with being freed from the alien tech). The blurb's warning is outright lying! Wtf? Why lie about that? It's rape, actual rape, the entire time. Both leads are forced in different ways into the rapist/victim roles by the alien slavery collar around Vell's neck, so they're both victims in a way (not that the book acknowledges this seeing as it fundamentally does not understand rape). But the fact remains: it's rape the entire time. There is no "dubious" consent. Whoever wrote that blurb should be ashamed of misrepresenting something so serious.

David, the lead, reminds the reader throughout chapters 1 and 2 that raping is bad, like we didn't already know. The way he incessantly talks about it actually gave off creepy vibes like a guy promising he's not gonna murder or roofie you on the first date over and over. He doth protest too much. And it makes sense once he "gives in" and starts raping Vell. Now, he has to for Vell to be able to eat (cringe fanfic premise, barf). In the early chapters, I powered through this thinking it would be told in a tragic dark way for both men & we'd get a happy payoff with freedom and consent for both men. NOPE! David totally enjoys raping Vell, and we are forced to hear his rape-loving thoughts, which are clichéd fanfic trash tropes. Vell's perspective is RARELY shared, to my dismay, and when it is, it's as bleak and soulless as one would expect of a person with no free will. There is not even one scene that is romantic. Not one.

The worst part is that the promise of consensual scenes is also a lie. After suffering through disturbing rape scenes framed as sexy (they were not--the writing is terrible and it's all RAPE), there is no period of healing from the alien tech slavery, rape, etc., nor is there a period of real consent between two adults.

All of that is reason enough to skip this book. But there is another reason to give it a skip: this is literally just a bad wattpad fanfic.

It finally clicked into place why this has such terrible story structure, no engaging plot, and hollow characters when I saw in the reviews that this is Iron Man and Loki fanfiction. Holllllyyyy sh*t. Now I get it. With fanfic, writers don't need to create or develop characters because they have another story's fully formed characters to plug in & all the readers show up knowing the characters' depths. This book does NOT establish or develop who the characters are EVER. As a result, their actions and experiences are much creepier than the writer probably intends. Nothing is emotional or engaging. It's just cardboard cutouts shuffling around aimlessly in a boring, rape-filled landfill of a story. David is unrecognizable as Tony beyond being rich. He has no sense of humor, no snark, no sense of justice, no shaky friendships, no emotional depth, no motivations, etc. This is literally a personality-less shell named David. Same goes for the Loki stand-in! No mischief, no fight, no personality. Just a dude with black hair, literally. He never has no thoughts whatsoever.

Prince for Sale fails completely at being a book and even fails to be decent fanfic. Skip it. There's plenty of good Marvel fanfic out there for free. Go read that.

narrator was very good , I liked how he read it , not too fast or too slow , just right , thanks

love the Loki/Tony inspiration I've been waiting s while to find a similar dynamic. voice was amazing.

This was really good

I felt this book was really entertaining I like action adventures with a little bit of romance. This was the perfect mix, it gave us relevant sex scenes with a good overall story line. I did enjoy the characters and the narrator

Weird, but awesome. David's dilemma, Vells plight, crystal magic and planet hopping, it all comes together in an oddly touching tale.

Love it as much as the book

I love the book so much, but to have it available as an audio is even better.....It's a must book to read/listen too.

Sucks you right in

The ending is HFN and a whole bunch of stuff os left unresolved, but at least the characters get down and dirty in the best way by the end of the book.


The writing was good and solid and the world building fun!

BUT. I felt like there was a HUGE miss out with Venn's fear of David not wanting him because he was 'damaged goods' and was used by many others.
Also, David's anecdote about his dead parents or being kidnapped when he was younger felt like overkill just to 'HELP MAKE VELL FEEL NOT SO ALONE' when David could just be... his caring self who wants Venn to not feel like he is ever alone.

Narration was really good - I loved the different voices each character was given and I enjoyed the sassy lint to David's speech.

I only bemoan the narrator's obvious aversion to moan during the sexy parts.
Maybe he was too self-aware and uncomfortable about it, but he can take some pointers from A+ pros like Joel Lesley, Michael Pauley etc
Because the sexy parts, esp those in the end felt like they could definitely have more... peak.

Make no mistake, this is fan fiction.

However, I love fanfic, and I am more than willing to pay for excellent (and hot!) writing like this.