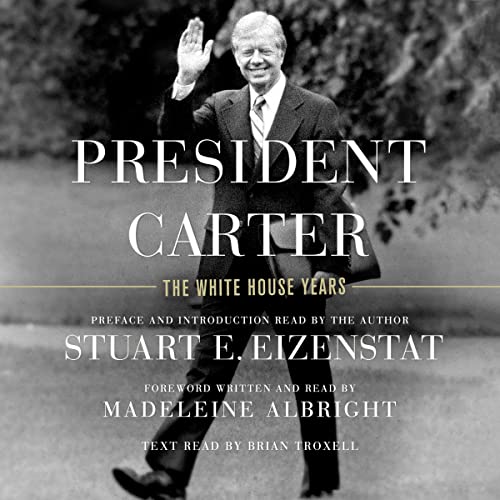 This program includes a foreword written and read by Madeleine Albright, with a preface and introduction read by Stuart Eizenstat. The definitive history of the Carter administration from the man who participated in its surprising number of accomplishments - drawing on his extensive and never-before-seen notes.

Stuart Eizenstat was at Jimmy Carter’s side from his political rise in Georgia through four years in the White House, where he served as chief domestic policy adviser. He was directly involved in all domestic and economic decisions as well as in many foreign policy ones. Famous for the legal pads he took to every meeting, he draws on more than 7,500 pages of notes and 350 interviews of all the major figures of the time to write the comprehensive history of an underappreciated president - and to give an intimate view on how the presidency works.

Eizenstat reveals the grueling negotiations behind Carter’s peace between Israel and Egypt, what led to the return of the Panama Canal, and how Carter made human rights a presidential imperative. He follows Carter’s passing of America’s first comprehensive energy policy and his deregulation of the oil, gas, transportation, and communications industries. And he details the creation of the modern vice presidency.

Eizenstat also details Carter’s many missteps, including the Iranian Hostage Crisis, because Carter’s desire to do the right thing, not the political thing, often hurt him and alienated Congress. His willingness to tackle intractable problems, however, led to major, long-lasting accomplishments.

This major work of history shows firsthand where Carter succeeded, where he failed, and how he set up many successes of later presidents.

"A comprehensive and persuasive account of Carter's presidency that stands far above the familiar confessional and reveal-all accounts by former White House officials...Eizenstat has succeeded in showing that the Carter presidency had a huge impact on American political life." (Washington Post)

What listeners say about President Carter

This is an attempt at historic rehabilitation of the Carter administration by an insider. Like the administration itself, the book is well-meaning, but flawed. It needed an editor the way the Carter White House needed a Chief of Staff. There is repetition. And there is repetition. There is just enough memoir to be distracting, and occasionally annoying. By using a topical organization scheme rather than a chronological one the book never creates a good picture of what was going on at any one time and makes it difficult for the reader to synthesize the material. All this said, Eizenstat occasionally succeeds in convincing the reader that Carter's four years included more substantive achievement than is recognized. And he levels some candid and serious criticisms of his beloved boss. But, again like the administration itself, the book manifests a sometimes shocking degree of naivete and self-righteousness. There are more than a few OMG moments when it is difficult to believe that Carter believed what he believed or did what he did. The book brought back many memories, but very few of them good. America was a post-Vietnam, post-Watergate mess in many ways from 1976-1980, and Jimmy Carter was a President for the times.

Tons of insight, but a major slog

Positives:
1. The reader was excellent, very easy to listen to.
2. Notwithstanding my criticisms below, I learned much about Carter and his presidency.
3. The inside perspective was interesting. Different from most presidential bios I've read.

Negatives:
1. OMG, it took such effort to force my way through these 37+ hours. Eizenstat said he's been writing this book for 25 years. He seems to have become so attached to every word that he couldn't cut even the most trivial details. One example among maaaany, we are told not once, but twice the names of the Shah of Iran's two French doctors? The problem with listening to a book like this is that the details can be so numbing that you lose concentration. This book should have been hosed down and put in a hot dryer.
2. The book was mostly organized topically, rather than chronologically. I can understand why the author did that. But as a result it was hard to appreciate the many simultaneous pressures on Carter.
3. The book was pretty darned self-aggrandizing. An apt subtitle might have been: An account told by his hardworking, smart-as-hell, wonderful, knew everyone in D.C., Harvard Law-educated aide, buddy and surrogate son. It was too much.

I have just completed reading “When the Center Held” by Donald Rumsfeld about the presidency of Gerald Ford. I chose to follow the book by the newest biography of Jimmy Carter “President Carter: The White House Years” by Stuart E. Eizenstat. I chose to read these two books to attempt to understand how the country attempted to heal after the Presidency of Richard Nixon and the Watergate Scandal. I think the country will need to heal and re-unite itself after the Trump presidency.

The book is well written and meticulously researched. Eizenstat utilized a lot of his own materials from his time in the Carter White House. The author also accessed the National Archives as well as the President Carter’s presidential papers, and he also interviewed Carter. The book is large at 999 pages or 37 1/2 hours via audio format. The book is well documented and indexed. I do not believe this book is totally unbiased. The author did attempt to portray and analyze in an unbiased matter, but it may not have been successful enough for my scales. Eizenstat stated Carter was to liberal for the conservatives and to conservative for the liberals. After my readings I have come to consider that Ford and Carter were extremely honest men with the right personalities that were needed by the country at the time. I was surprised to learn Carter set aside more lands for parks and public use than any other president. I enjoyed this book that re-evaluates the presidency of Carter allowing for the passage of thirty-seven years. I learned a lot from this book and would recommend it my fellow readers.

Brian Troxell does a good job narrating this long book. I also enjoyed Madeleine Albright’s forward which she read herself. Troxell is an actor and audiobook narrator.

I delayed purchasing this book because some of the reviews indicated the author is too biased in favor of Carter. But Carter biographies are a bit limited on Audible, so I did finally get it. I'm so glad. It is a detailed account of Carter's years as president boy one of his highest staff advisors. It lays it all out - the successes, the failures, the flaws. I wish I'd paid more attention to what was going on politically back then, so now I understand, about forty years too late. But still - finally. Good book. Highly recommend.

Mr Eisenstat thankfully kept daily detailed notes on the tumultuous Carter presidency as A Senior Domestic Policy Advisor which helped produce one of the finest in- depth looks into the inner workings of our 39th or any other President !
Wonderful narration and an honest appraisal by Mr Eisenstat of Mr Carter's foreign and domestic decisions during his four year tenure in The White House allow the listener to learn or relive a tumultuous time in our modern history that the repercussions in relations to the Middle East, especially in regards to Iran , are felt to this day.. No detail from the administrations handling of issues large or small are left out. At times the depressive events from the rise of Ayatollah , the deposure of The Shah of Iran, and the hostage crisis that lasted 444 days with the failed rescue mission may seem to overwhelm, but I gained an insight and knowledge into events that occupied my High School years.
I recommend this audiobook to any student or follower of Presidential History ! Whether a Carter critic or fan, Jimmy Carter is an admirable man whose personal convictions may have wrongly served him and the country during some of our most dire moments, but his tenacity in the Middle East peace negotiations between Anwar Sadat and Menachin Began showed the world Carter at his best.

this gripping book tells what it was like to be inside the white house during the tumultuous days of the late 1970s. it should do much to rehabilitate the reputation of an underrated president who is long due for a reassessment. the unspoken contrast with Trump could not be starker.

Good history of the Carter presidency

Excellent audio book. Not much has been written about the Carter administration. Eizenstat did an excellent job of covering both high and low points in our history.

While this book will doubtless prove of great use to future historians of the 1970s and biographers of the Carter Presidency, it is tedious beyond belief in its detail, is ordered in a manner that suggests an editor who was simply a "yes man" to every idea thrown out, and is so wordy that I doubt there was any editor employed at all. I have both the physical copy and the audiobook, and found this to be neither enjoyable nor informative in either format. Conjure up the dullest professor you had in college and imagine that professor writing a book out of his lectures, and that is this book. Factually correct and, as an audiobook, well narrated, but you'll drop the class before the end.

I knew very little about Carter’s presidency, and wanted to know more about the man I admire and how he ran the country. I was surprised by the content; all of Carter’s accomplishments and how doing the right thing doesn’t mean everyone sees it that way. Very thorough history.

Very thorough, well written and well read history of the Carter presidency. I would highly recommend to anyone interested in history or presidential politics.