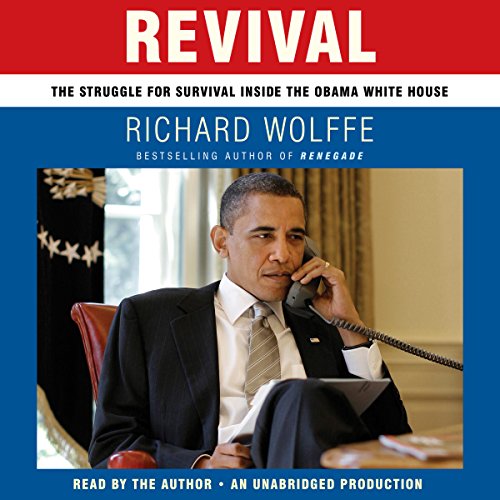 Revival is the dramatic inside story of the defining period of the Obama White House. It is an epic tale that follows the president and his inner circle from the crisis of defeat to historic success. Over the span of an extraordinary two months in the life of a young presidency, Obama and his senior aides engaged in a desperate struggle for survival that stands as the measure of who they are and how they govern.

Best-selling Obama biographer Richard Wolffe draws on unrivaled access to the West Wing to write a natural sequel to his critically acclaimed book about the president and his campaign. He traces an arc from near death to resurrection that is a repeated pattern for Obama, first as a candidate and now as president.

Starting at the first anniversary of the inauguration, Wolffe paints a portrait of a White House at work under exceptional strain across a sweeping set of challenges: from health care reform to a struggling economy, from two wars to terrorism. Revival is a road map to understanding the dynamics, characters, and disputes that shape the Obama White House. It reveals for the first time the fault lines at the heart of the West Wing between two groups competing for control of the president’s agenda. On one side are the Revivalists, who want to return to the high-minded spirit of the presidential campaign. On the other side are the Survivalists, who believe that government demands a low-minded set of compromises and combat.

At the center of this compelling story is a man who remains opaque to supporters, staff, and critics alike. What motivates him to risk his presidency on health care? What frustrations does he feel at this incredible time of testing? Written by the author who knows Obama best, Revival is a frank and intimate account of a president struggling to adapt, enduring failure, and outfoxing his foes. It is a must-listen volume, full of exclusive insights into the untold and unfinished story of a new force in world politics.

What listeners say about Revival

I don't disagree with the theme of this book. Obama is a revivalist who wants good for America. Republicans are bad. Yet I don't like the way the case for those conclusions has been made.
Richard Wolffe is not one of those partisans who are biased to one side over the other. He present himself (or at least I see him) as a journalist whose opinions are based on facts and grounded into reason. And in making the case for any of those conclusions, he would demonstrates the facts and reasons for those conclusions. Unfortunately, this is not the case here.
While the book is full of analysis to the transformation of the Obama campaign as it moved to the White House and faced the realities of governing, it's light on reporting. There are no new insights into the White House as you find 'Game Change' does to the 2008 campaigns.
One thing I really didn't like is making assertions about people and policies without explaining how did you jump to those assertions. One example is the description of Larry Summers.
The book maybe right about conclusions but that is not what you look for in a book. You can get that in a short TV segment. Maybe my expectations were wrong.
The book makes a good case for Obama. It's a good chance to see things how Obama sees them. It reflects the authors knowledge of the president.

What made the experience of listening to Revival the most enjoyable?

Most of us like to have a glimpse of what happens behind the scenes.

He has a perfect voice for this kind of book - that is of course especially because he wrote the book and because he was there on many occasions descriped in the book.

If you could give Revival a new subtitle, what would it be?

Two steps forth - one step back.

The book became lengthy at moments but I am not sure what should have been left out. It is a very thorough book and I am not sure something less thorough would have made it a better book.

A must listen for political pundits

Listening to Richard Wolffe, with his British accent, quote President Obama was a hoot! This being said, the book is a very serious, well-researched look at the insides of the White House. The author shows that a lot has been accomplished in a short period of time in the Obama Administration, despite being faced with heavy handed obstructionism. Wolffe is very good at in-depth coverage, like a professional journalist should be.

Revival lacks the punch that Obama fans are used to when reading about their favorite president. Wolffe jumps from story to story and the pace is lugubrious. There are few interesting tidbits and the book needs divine help. Wolffe is much better on tv.