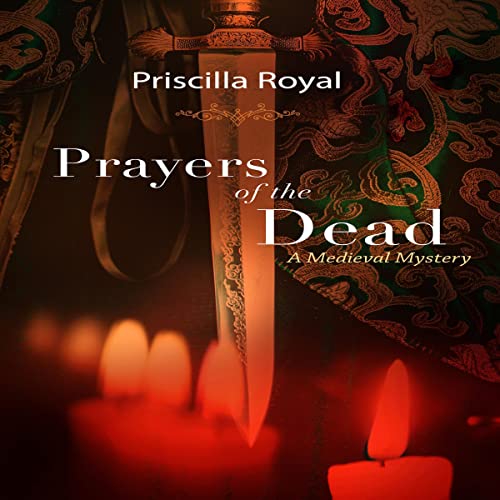 Prayers of the Dead

By: Priscilla Royal
Narrated by: Virginia Ferguson
Try for £0.00

November 1283. Prioress Eleanor’s cousin, the earl of Ness, visits with his wife, Eda. When his unloved spouse is murdered in the priory chapel with his knife, he becomes the prime suspect. Another murder follows. Eda’s quiet priest is killed in the same chapel. Eda had many enemies, so what connection could there be between a ruthless woman and a pious man who cared nothing of earthy things?

Crowner Ralf insists the crimes fall under the king’s law and that Prioress Eleanor lacks objectivity because of her cousin’s involvement. Prioress Eleanor refuses, claiming that she must determine why the crime occurred in her priory. She also believes that her cousin is more likely to tell her needed details than to an unknown crowner. But as she digs deeper, she begins to fear what she might discover. She may have thought her cousin was innocent, but she realizes he is lying to her. Having given her word that she would not be blinded by familial love, she knows that she may have to face tragedy and walk her cousin to the gallows.

What listeners say about Prayers of the Dead

Prefer narration by Wanda McCaddon but still enjoyable. When is the next story out please

Took me a while to get used to this narrator. I have loved all this series and want to ask Audible to please record the missing ones please! What on earth will I read now! Think I've read all the medieval mysteries ( apart from a couple I couldnt get to grips with but that might be peculiar narrators like the one in Paul Doherty's books.
Anyway thank you Priscilla Royal. please make Audible record the missing stories. I know I can read myself but like a child I love being read to!

I really liked this series up until this newly numbered pair. So much moral wailing, unrealistic forgiveness and a drunken sounding narrator.

This was ruined by the terrible narrator. I stuck it out to the end because I like this author but nearly gave up several times. A dreadful choice of reader

Great series of books, including this one, almost ruined by poor choice of narrator

too much gay stuff. it seems so unnecessary to the story as it always has

Great story - not a good narrator

This is another excellent tale by Priscilla Royal! I was able to listen to it all the way through. The narrator sounds like every word is an effort and a sore trial.
I hear an American accent and possibly that's what I find incongruous in her narration of this book.