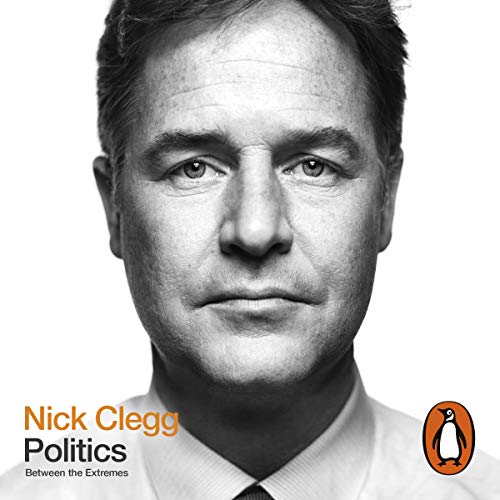 Politics has changed. Five years ago Britain had a coalition government built on compromise. Now the Conservatives rule unchallenged, a chasm has opened up between Left and Right and the centre ground is deserted.

Nick Clegg knows the volatile state of modern politics better than anyone else. Here he offers a frank and honest account of his experiences - from his spectacular rise in the 2010 election through his tumultuous years as Deputy Prime Minister to a brutal defeat in 2015 - in order to tell the inside story of this change and reflect on what it means for our future.

He writes candidly about his own mistakes - including the controversy around tuition fees - the tense standoffs within government and the sometimes bizarre challenges he faced. He lifts the lid on the arcane world of Westminster, offering startling insights into the hidden workings of government, and reflects deeply on the decision to enter coalition with the Conservatives.

In a rapidly and profoundly changing world, he argues that the long-term survival of progressive politics relies more than ever on the radical reform of our outdated political system. Whatever your political persuasion, if you wish to understand how Britain is run today you cannot afford to ignore this audiobook.

What listeners say about Politics

A loss to British politics.

An amazing book. Nick Clegg comes across as intelligent, honest and humble. There is no sour grapes about how he and his party were treated in the 2015 election; instead an honest account of what happened and why.

A very interesting insight into modern politics.
The system could be so much better but I can see now why progress is so slow.
Nick Clegg is a good man, I wish him all the best in the future.

First opportunity with Audible. Makes the book all the more enjoyable when you hear the author.

Nick gives a fresh and frank assessment of all the risks, the twists and turns, and the depth charges that were in his way - and that of his Party - in joining and making a success of the then Coalition Government (from a LibDem perspective).

Hours of Nick Clegg crying about the tories and making assumptions about large swathes of the electorate.

Nick is unbelievably offensive stating non liberals are unreasonable and that patriotic people is not real but the liberals should bring in a new real patriotism.

Whatever your politics, a fascinating analysis and insight into the challenges of Coalition Govt, and the sucking out of the life of the centre ground in our democracy. Read it. We all need to understand as we move forward into a very different future.

I really loved this book. It was thoughtful, insightful and balanced. It gives real insight into the workings of the government in general and the coalition in particular.

Nick Clegg reads in an interesting and engaging way.

Some reviews say that the book is just tory bashing but I didn't think that at all. He does talk about some problems he had with the tories but you'd expect him to.

If you're interested at all in modern politics I think this is the best book you'll find. An absolute must if you're a politics student.

it is very good that he narrates it and he does so in an engaging manner. it lacks somewhat in personal anecdotes about his time in the cabinet which is somewhat disappointing as we get little insight into the personal nature of those characters. it does however explain much of the good he managed to implement in government and explains somewhat the collapse of his party.

If you're interested (and like me, somewhat dismayed) in the recent events in British and global politics, this book is an insightful analysis and commentary into the events and their causes, as well as quite informative about the workings of British politics as a whole.
Nick Clegg is a good narrator, and I thoroughly enjoyed this book. Highly recommended.

Excellent book. The entire UK should read it!

I adored every single chapter and was amazed at his being so frank. I am listening to it again...Thank you Mr Clegg. Please do write another one soon with an audio version too as it is very helpful when one is tired and still would like to enjoy a great book.

Good books and some intresting points raised ... it is part memoir part essay on

An essay to liberals

More of a 3.5 starts... Listened to this on my commute - some interesting insights into the coalition and Nick Clegg's hindsight and vision. The middle got a bit stale and repetitive (felt almost whiney) - if short on time maybe just read/listen to the first chapter and last two!
However, if interested in politics I recommend to give it a go - it's worth the air time

Insightful and honest from beginning to end

This is an interesting and insightful book, with excellent narration by Nick himself. All chapters are revealing, honest accounts of a wide range of issues, from the Coalition, personal and political mistakes and public perception to the nature of power, Whitehall and more current affairs affecting us all. Although written from a Brittish standpoint, Nick's thoughts, experiences, and analyses are applicable far beyond the borders of the U.K.

I particularly like Nick's take on modern Liberalism and what it ought to be. Indeed, one can make the argument that the book (or at least part of it) could be considered a paper making the case for Liberalism and how it should be defined and used moving forward. Or to put it another way, the great need for and value of reason, moderation, compromise, tolerance, transparency, and accountability.

If you are interested in politics, regardless of your ideological persuasion, I can warmly recommend this book to you.