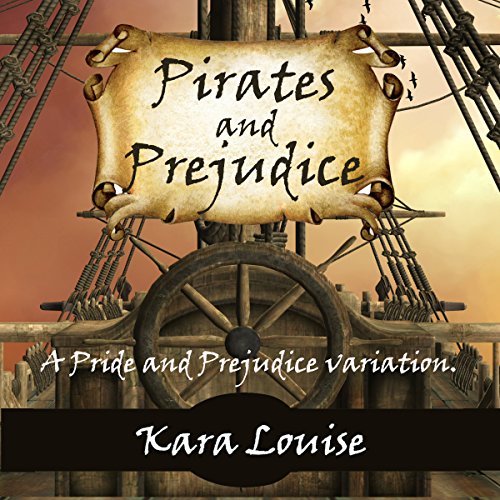 By: Kara Louise
Narrated by: Tiffany Halla Colonna
Try for £0.00

After Elizabeth Bennet refuses Mr. Darcy's offer of marriage, it takes a heavy toll on him. He withdraws to London and disappears near the docks, away from family, friends, and acquaintances. When he is mistaken for an escaped pirate, he is thrust into an adventure he would never have imagined. Will this be what he needs to forget the one woman he had come to love?

When her aunt and uncle have to cancel their plans to tour the Lake District, Elizabeth Bennet has the opportunity to sail to the Isles of Scilly with her father. After a pleasant visit, the voyage home brings storms, a shipwreck, and pirates! When she is rescued by gallant Captain Smith, she finds herself inexplicably drawn to him. What will she do when she discovers he is the very man whose offer of marriage she refused just a few months earlier?

What listeners say about Pirates and Prejudice

Pirates and Prejudice was a delightful, pirate-y take on the adventures of our favorite couple. Starting shortly after the proposal debacle at Rosings, this book places Darcy in rough shape on the docks of London. He’s let himself go and has sunk into the worst mood. It’s definitely not the normal arrogant, pride-filled gentleman we’re used to. When he’s forced into “for the crown” piracy, we get to see our hero transformed into an ARGGH!-saying, sword wielding, tough guy.

Elizabeth on the other hand has taken a trip with Mr. Bennett to see his ailing sister in the Isles of Sicily. While visiting family, Elizabeth becomes acquainted with her cousins Melanie and David. Everyone in the family thinks David is a fine catch for Elizabeth and she begins to think so too. But can David’s pleasantness take place of Darcy’s irksome place in Elizabeth’s heart? Before either of them can find out, Elizabeth is kidnapped by pirates and the real fun begins!

I adored Darcy in this. Even though he had to go against a lot of his normal instincts, being pushed outside of his comfort level was fun to watch. Some of my favorite parts involved Darcy learning to talk and act like a pirate.

One of my favorite side characters is Mr. Bennett and we get to see a lot of him here. My favorite new character is a pirate named Bellows. Even the evil enemy Lockerly is fun to watch. Jane, Bingley, Georgianna and the rest of the Bennett’s are seen as well, with cameos by Wickham, Miss Bingley and the dreaded Lady Catherine.

During the pirate kidnapping scenes there were several enjoyable moments I’ll not disclose to ruin your fun, but be assured, you will enjoy this book.

This is a must read for any Austen fan and another gem in Kara’s crown as queen of Austen Variations.

Tiffany has a calm, but intriguing voice that will truly bring the book alive. Although she is a woman and does all the voices in the book (even the men), she has a great grasp of accents and it’s quite enjoyable.

The story was such a fun take on Pride and Prejudice. I really enjoyed the twists and turns presented by the author. The naration was perfect! The reader's many voices for characters were spot-on and added an extra dimension to the story which made it so much better than reading it to myself!

The premise is adorable and exciting...but once the love is 'declared' the last few chapters are overkill. I ended up skipping parts and skipping the whole last chapter

Which character – as performed by Tiffany Halla Colonna – was your favorite?

Do you think Pirates and Prejudice needs a follow-up book? Why or why not?

no follow up. It was too much of a good thing at the end. The only way a follow up would work is if it was them sailing together but not as pirates

Very good narration and an original story. Sweet, not sordid (PG Rated). A couple of good twists, but also predictable in places. A little too tidy and neat in my opinion.

Loved the story hated the narrator

The story was good but the narrator...OMG..she was soooo over dramatic that I couldn't follow the story wondering why she over dramatized the parts she was reading....most of the times you were wondering if they were going to do something very different. Why isn't there a producer listening in and stop them from over performing. UGH! ANOTHER story ruined by an over dramatic or very bad reader.

I am now a seasoned JAFF listener and I wished I had passed on this one. I don’t ever remember skipping chapters in other JAFF stories before but this one droned on with Character repeating thoughts or words over and over. Scenes were longer than needed to convey the plot on to the next scene. I, sadly, skipped 6 chapters and found I still knew what was happening without feeling as though I had missed part of the plot.

The narrator did an ok job, although Darcy, in whatever disguise, often sounded out of breath in order to sound “gravely or masculine” (not sure which she was aiming for).

A case of mistaken identity results in Darcy being arrested as an escaped pirate. When his true identity is confirmed, he is asked to take part in a ruse to capture the real escapee. Learning not to act as a gentleman will be a challenge. As circumstances bring a traveling Elizabeth back into his life, keeping his true identity secret will test his still hurting heart to the max.

This engaging and well-written book, along with a very good performance and narration by Tiffany Halla Colonna provides hours of entertainment. This is a first-time listen of this narrator for me. Well done.

Darcy and Elizabeth face the perils of pirates

I thoroughly enjoyed this variation of Pride and Prejudice. Darcy is terribly depressed after Elizabeth refuses his very inept proposal at Kent. He lets himself go. Gets and stays drunk. Let his hair and beard grow and dresses in dirty bedraggled clothes. While wandering the streets near the docks in London in this horrible condition, he is thought to be an escaped pirate and arrested. Elizabeth in the meantime has sailed with her father to visit cousins. It ends up that their paths cross but she does not recognize him at first. She thinks he is a sea captain. A lot of action occurs as they get to know one another better and many misunderstandings are corrected. Many of our characters from Jane Austen's book appear in Pirates and Prejudice - All the Bennetts, Bingley, Wickham, Lady Catherine, etc. That is alway great fun.

The narration is excellent. Ms. Colonna has a wonderful talent for performing, and an beautiful smooth voice. i highly recommend this book.

Who pronounces valet with a T?!? This narrator. Who can turn Elizabeth into a simpering female? This narrator. And who can portray Darcy as a melodramatic weakling? You guessed it, this narrator! She can take a decently wored statement, add 200% drama and voice cracking and turn the character into a crybaby. I hardly recognized Darcy and Elizabeth's characters, they were so weak. Okay, rant over. On to the story...
I thought I'd like the story, as I'd read another book with them falling in love on a ship and it was well written. This book had many good points and adventure, but I REALLY didn't like the characterisation of Darcy from the very beginning. Him going into a depression fit that makes him completely lose himself to the point of becoming like a drunk hobo? Makes him seem weak in character and quite honestly, a sad creature...so very different than the srong man of high convictions and honor that we know him to be and love him for. If you can ignore the main characters being so different than the Darcy and Elizabeth we all know and love, you may enjoy this book. Personally, I think she should have just given them different names and not made it a JAFF book. These characters were so different from the people we know them to be.