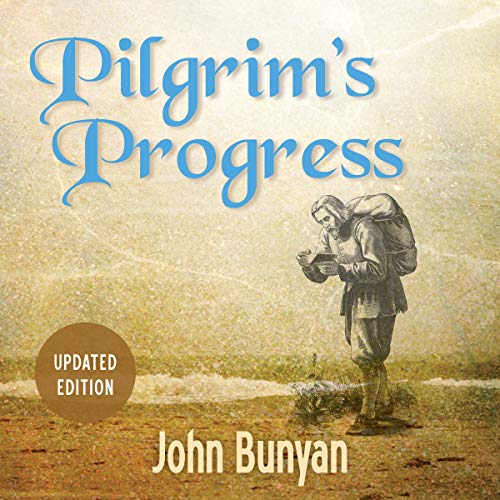 Often disguised as something that would help him, evil accompanies Christian on his journey to the Celestial City. As you walk with him, you'll begin to identify today's many religious pitfalls. These are presented by men such as Pliable, who turns back at the Slough of Despond; and Ignorance, who believes he's a true follower of Christ when he's really only trusting in himself. Each character represented in this allegory is intentionally and profoundly accurate in its depiction of what we see all around us, and unfortunately, what we too often see in ourselves. But while Christian is injured and nearly killed, he eventually prevails to the end. So can you.

What listeners say about Pilgrim's Progress

It was for me, but not the narration

Would you ever listen to anything by John Bunyan again?

Yes, but not with this narrator

Try reading it in English!

This is a modern English version of The Pilgrim`s Progress which I have been waiting to become available in audio. Unfortunately, in this audio edition the text of Scripture references are also read along the reading the text of the book. This is quite distracting and interrupts the narration of the story, especially so in the case when the Scripture being read is a bit long. Other than that this modern version is what I want to listen to as it is very clear and easy to understand.

dreadful narration, especially Mercy. Missed a lot of her dialogue due to Cockney accent, but most of narrator's accents were extremely poor and dare I say, offensive

So unlike the version we were forced to read at school. This is an enjoyable story now and it is very easy to see the underlying nature of Bunyan's tale.
Make sure you give this to your children so that they understand the story before they meet it in English Literature lessons. They will appreciate your help and support.

If you are ready to listen with an open heart useful lessons can be learnt.

Loved it! It was an insightful journey!

It was a fun journey that was filled with truth and marked observations of the Christian life. Better than a sermon.

I hardly need to write a review of a book so widely read outside the bible. The performance is good and thankfully easy to understand at 2.5 it's normal speed which I have started to listen to . I shall listen again to all of it at that speed. Bunyan had such a clear mind and grasp of theology it would take a lifetime to plunge into the depths of his biblene thought , all I can say is taste and see I got one am not disappointed.

More enjoyable and thought provoking than I ever expected.
Oh to live in a world where your name defines your character. But also to know your character is only part of the way God accesses you.
So well constructed and referenced story line.

Trying to follow the story line is useless! We have read other versions of Pilgrims Progress several times and never had to endure having every scripture reference quoted in full inserted as an interruption into the narrative. Sometimes more than once per sentence! The whole story is impossible to enjoy. I am removing it from my library, sorry I bought it.

I do not wish to rate the story as such as it needs nothing from me and I could add nothing to its understanding after a few hundred years of comment.

I do not want my comments of the performance to be a reflection on Mr. Christensen. His portion was done quite well. Rather I have a couple technical complaints.

1) Often voices/effects would be heard out of place in the story. There was one 5-10 second chunk of silence near the end of Christian's story.
2) The voice effects for the villains was not bad but the sound level of the voice fell below the effect necessitating playing with the volume knob.
3) Always, always check to make sure music does not mask the narration.
4) This version includes the scripture references, which is great when you are reading (I got the matched kindle/audible set) but during an audio presentation it tends to disrupt the flow. I find this a common problem with Christian books. Listening, enjoying, learning, then an interruption for what are basically parenthetical comments. If I'm listening I'm generally not in a position to look up references, make note of them or do anything with them.

Following the storyline was difficult with every scripture reference quoted in full and inserted was as a distracting interruption into the narrative.

Those who have hears, Let them hear!

Another author Charles Stanley recommended this book. Initially upon reading the reviews my zeal quickly diminished. I began to think, maybe, I should just wait til a scripture free version comes out. I was quickly convicted. How stupid? Reading a Christian book with no biblical reference. I love this book, with scriptures and all. It quickens your spirit to as your mind listens. I would not change it. You have missed the revelation of this book's message if the interjected scriptures are to much for you. May those who have ears to hear, Hear in your heart!

Who would you have cast as narrator instead of Mark Christensen?

Was Pilgrim's Progress worth the listening time?

Not the best version for an audio book

Pilgrims Progress is a wonderful book filled with allegories for the Christian journey. However, this particular version includes full scripture for said allegories. If a person was reading the book, it wouldn't be a big deal. However, because this is an audio book, the story is interrupted every few words to input scripture. For example (and I am just making up this quote) &quot; Evangelist said 'You must flee&quot; Scripture: (full scripture is read) 'Keep running and don't look back' Scripture (full scripture is read). The narrator always introduces the scripture by saying &quot;Scripture&quot;. This happens about every sentence, sometimes occurring multiple times within a single sentence. This makes it impossible for the listener to follow the story, because there isn't enough uninterrupted dialog to focus on. My suggestion would be to read the book, or find another audible version that allows the story to flow.

Not the story I remembered.

Jumped into scripture quotes so much I had a very hard time keeping up with the plot line! It's like a very very long sermon. Wouldn't recommend this rewrite but the voice actors were great!!

others did not like scripture references inserted in the text, but I liked it.

I enjoyed this book and recommend it. The updated English is easier to understand.

If You Haven’t Read This, Do So While You Still Can!

There are many pleasant things to put on a “bucket“ list. This should be only second in line of books to read. The first should be the Bible. But many never wish to read that one. For those of you who feel that way, I highly recommend this classic. The Bible is still the best selling book of all printing history. This book is the second highest selling.