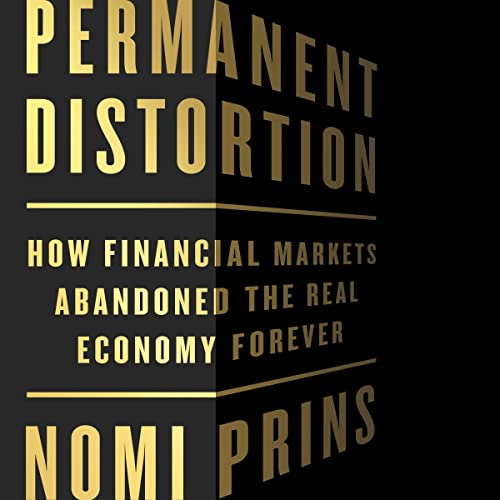 By: Nomi Prins
Narrated by: Ellen Archer
Try for £0.00

A riveting exposé of a permanent financial dystopia, its causes, and real-world consequences

It is abundantly clear that our world is divided into two very different economies. The real one, for the average worker, is based on productivity and results. It behaves according to traditional rules of money and economics. The other doesn’t. It is the product of years of loose money, poured by central banks into a system dominated by financial titans. It is powerful enough to send stock markets higher even in the face of a global pandemic and threats of nuclear war.

This parting from reality has its roots in an emergency response to the financial crisis of 2008. “Quantitative Easing” injected a vast amount of cash into the economy—especially if you were a major Wall Street bank. What began as a short-term dependency became a habit, then a compulsion, and finally an addiction.

Nomi Prins relentlessly exposes a world fractured by policies crafted by the largest financial institutions, led by the Federal Reserve, that have supercharged the financial system while selling out regular citizens and leading to social and political reckonings. She uncovers a newly polarized world of the mega rich versus the never rich, the winners and losers of an unprecedented distortion that can never return to “normal.”

“Prins has done it again. In her newest book, Permanent Distortion, [she] takes a hard look at the conflicts and corruption in the global financial system and banks in particular. She provides a tour d’horizon of the past ten years. . . . This book is a must-read for anyone looking to understand what’s really behind the financial chaos of the past decade.”—James Rickards, author of Sold Out
“Prins breaks through the noise like no other historian. When I am looking to understand what’s really unfolding in the economy and finance, she’s where I turn. She’s from Wall Street and knows Washington—yet tells the truths that Main Street needs to hear.”—Robert Kiyosaki, bestselling author of Rich Dad Poor Dad
“Prins is one of the only people in the world qualified to explain one of the biggest stories in the world, if not the biggest: the manipulation of central banking policies around the world. . . . Permanent Distortion describes the gradual replacement of the real economy with a kind of permanent Ponzi scheme, fueled by cheap money and selective regulation, that rewards insiders and disburses riches by access, not merit.”—Matt Taibbi, award-winning author and investigative reporter

What listeners say about Permanent Distortion

Good book, easy to listen and lots of fakts.

Very well researched material and sounds like it is written from a neutral and unbiased position. I liked the book and suggest it to anyone who looking for answers how to navigate in life and not fail in big traps while looking how to solw small problems. 👍

Wakening of the Giant

Extremely educational books, worthy of being part of academic lessons in our schools.

Really good flow from the reader, and a great insight of the money machine. Very detailed and accurate.

Very well written and narrated. A trip down memory lane, recalling the cast of characters and strange developments that have taken place in recent decades. Full of pertinent information, seamlessly tied together from the perspective of an author who was paying much more attention than I ever was. As an independent voter, I found it to be fairly even-handed.

i have followed Nomi for a while but was surprised by her good analysis of the future of money. Having gone through my own transformation to understand the basis of money and "reality", I loved the final chapters of this book. i recommend it to all since we NEED this transformation!!

I’ve been following the author for many years and have enjoyed her appearances on many podcasts. If you’ve ever struggled to try and make sense of the madness which is our current economic system, this book will assist in making sense of how we got here. I am re-reading several sections. Highly recommended.

Meh. It’s basically a list of events we just lived through

The narration is clear, smooth, and articulate. However, there is not a whole lot of insight or new ways to interpret what we just lived through/are living through. It basically reads like a history of what happened long ago, and yet discusses events right up to late 2021 and here we are in 2022 still living through it. I was waiting for something like “what this means is….” Or “as a result [certain things] are inevitable, even if the FED kicks the can down the road again; therefore one should position themselves by….” In fact, even the title is kind of misleading. There were assertions made about how the Fed and Central Banks and politicians have distorted our sense of value and understanding of what things are worth and how inequality has been exacerbated, but there was no indication or even implication as to how one might deal with said distortions—they just are. Oh and there will probably be inflation of commodities like silver, copper and cobalt (the last sentence of the book)—the end. Apologies to the author as I do not like writing negative reviews, but I didn’t learn anything new and I doubt anyone who reads the Wall Street Journal or a financial blog every now and again will either.

The premise of this book is intriguing and probably accurate. The world of finance and particularly central banks are fueling asset markets and starving the real economy of capital. Unfortunately the latter 2/3rds of the book stray off into the weeds and on topics that seem both peripheral and not logically supported by the main premise.

struggled to finish.
narrator monotone and 😴 boring
thought would be more interesting ....

This is an excellent read. Nomi Prins precisely tells the facts of the last 13 years of monetary policy and its implications.

This book gives a very detailed explanation of our financial system and how the top 1% benefits while the masses suffer. A must read !

The market has nothing to do with the real economy

From the documented accounts in this book, Nomi Prins demonstrates that the stock market has little relation to, and even less impact on, the real economy where most people live. Although left brain bean counters will be right at home with the almost overload of quantitative information, readers without a financial background will also be able to follow these events that follow the money. Prins recounts event after event in which the markets are saved and usually come out stronger from financial melt downs such as that in 2008—while the real economy as measured by quality employment and financial security for those not playing the markets continues to decline. From causations documented in this book, Prins makes it clear that the real economy will never recover under this system. Increasing numbers of people are waking up to that every day—and they are starting to do something about it, including the use by some of digital currencies such as Bitcoin.

As implied in the book's title, Prins asserts there is no going back. The author identifies five main emerging economic sectors that overlap in functionality, material, and skills needed to implement them: 1. New energy, 2. Infrastructure, 3. Transformative technology, 4. New money, and 5. Meta-reality (Metaverse and artificial intelligence). Prins also identifies the sectors that are attracting public/private infrastructure investment in the real economy, and those are: 1. Sustainable power, 2. Technological innovation, 3. Virtual collaboration portals, and 4. Revolutionizing of money itself.

Of the several points made in this book, a prominent take away is the complete separation of the markets from the real economy—that when there is news of the market doing well, one must remember that has nothing to do with the real economy. Let's lean into the future and insist that all financial activity be put to genuine productive use.

I like the content but I want a smooth reader who has a deeper voice, this was like nails on a chalkboard, even my family was turned off when I was listening in the living room. Get a good reader please.