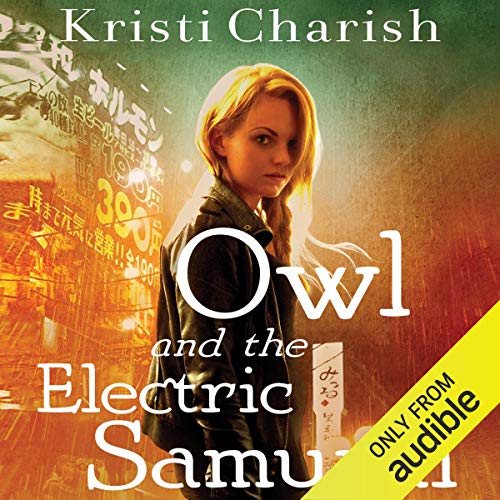 Owl and the Electric Samurai

By: Kristi Charish
Narrated by: Christy Romano
Try for £0.00

The International Archaeology Association (IAA) is responsible for keeping all things supernatural under wraps. They're also responsible for ruining the promising archaeology career of Alix Hiboux, better known as Owl.

Needless to say, Owl's still a little sore about that.

Just to keep Owl's life lively, the IAA has opened a bounty on the two designers of World Quest, the online RPG that is much, much more than it seems. Owl needs to locate the notorious gaming duo before the other mercenaries do. But finding the gamers won't be easy since every clue points to them hiding out in the legendary lost city of Shangri-La. Not to mention that the last time Owl and the game designers spoke, their conversation didn't exactly end on the best note....

Meanwhile, undercurrents of supernatural politics are running amok in Tokyo, dragging Owl and her friends into a deadly game of wits with an opponent who calls himself the Electric Samurai. The cost of losing? All-out civil war between two powerful supernatural factions.

All in all, just another great day on the job.

What listeners say about Owl and the Electric Samurai

This was really good! After reading the first two books in this series, I decided that I needed more of Owl’s adventures. I grabbed a copy of the audiobook and jumped into this third installment in the series. I would definitely recommend reading this series in order since the character relationships have grown and changed during this series. I thought that this book was really exciting and I loved watching Owl face impossible situations.

Owl has no shortage of things to do in this book. Her employer, a dragon, wants her to find the Electric Samurai armor. The IAA is also demanding that she locate the men behind the World Quest game. Of course, there are others who want to stop her from succeeding trying to get in her way. In this installment, Owl works with her incubus boyfriend, Rynn, and I think that they make a great pair. This book was exciting and full of action. I love that Owl is an archaeologist and knows her stuff but since she is a thief, she’ll take it if she needs to.

I believe that this was the first time that I have listened to Christy Romano’s narration and I thought that she did a great job. It did take me some time to get used to the character voices but only because I had created my own voices for those characters as I read the first two books in the series. Once I adjusted, I flew through this audiobook. I thought that she added just the right amount of excitement to the story while handling the humor with ease. I plan to pick up the audiobook for the next book soon.

I would recommend this series to others. This has been a great urban fantasy with fantastic characters, quite a bit of humor, and a unique focus on archaeology. I cannot wait to read more of this author’s work!

I thoroughly enjoyed the whole Owl series. It's been great watching the story unfold and escaping into a make believe world with wild characters and magic.

Who do I love more? Kristi or Christy?!

This series is so underrated in my opinion. It is such a fun and captivating Urban Fantasy!

It's not high on romance, bedroom scenes mostly take place behind bedroom doors, but it is filled with great world building, interesting politics and so much adventure. Christy Romano really brings the characters to life and has excellent voices for each one. Her tone of voice is perfect, as is the "age" of her voice for the characters.

I like that Alix keeps making the same mistakes, is still the same character but towards the end she's realizing that she's gotta get her act together. The ending (no spoilers!) totally slayed me! I saw it coming but I thought "nope, Kristi won't do it" but then she does it and I was stunned. I have no doubt she's going to do something in the next book and I have it on pre-order already.

One thing I really appreciated about this story compared to the previous was the stopping of name calling. It really bugged me that Alix called Rynn "whore" but it gets resolved and that made me pretty happy.

I also really liked how invested this series is in video games and history, it's such a good mash up!

Owl and the Electric Samurai

I listened to book 1 on audio, then I read book 2, and now I am back to audio and I guess because I started it on audio I just prefer the audio. I need those voices.

Owl does not have it easy. The IAA is after her (and it was never her fault to begin with). She is under the employment of a dragon and the worst, someone has her cat. Noo, not Captain. I do love a good cat sidekick. He is just there you know, and his growls plays a big part.

I like Owl, she is snarky (sure maybe too much for her own good but who cares). She loves cats and history. Gotta love that.

Anyway, in this one she must find two guys for the IAA and that is just the beginning. In comes the mystery of the electric samurai. And it does become a great adventure. Action, snark, danger and suspense.

Narration by Christy Romano
I do like how she plays the different part and I enjoy listening to her voice. I think she does a good job narrating this one.

I never know what to say when it comes to narration, I mean, I liked her voice and that is all I need.

Conclusion:
I am reeeeally looking forward to book 4 now cos omg that ending. Dang! That was intense and something bad happened. Something that will alter everything. I can't wait to see how it works out. I need it now