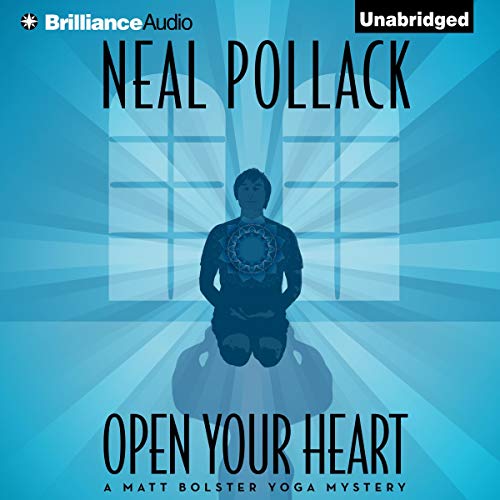 By: Neal Pollack
Narrated by: Fred Stella
Try for £0.00

With his star on the rise since solving the murder of Ajoy Chaterjee, yoga detective Matt Bolster is invited to teach at The Gathering, a prestigious yoga retreat run by the renowned Tom Hart. Bolster is a little dubious about the cultish atmosphere that surrounds Hart, but, as they say in L.A., it’s an honor just to be nominated. But when what starts off as a decadent retreat quickly spirals into deadly chaos, Bolster must use all his yoga-detective powers, and also his fists. Open Your Heart, like Neal Pollack’s first Matt Bolster book, Downward-Facing Death, is a biting satire of trendy, sexually-driven yoga culture, where ancient principles of loving enlightenment clash with the darkest corners of human nature. The latest in the Matt Bolster Yoga Mystery series will thrill listeners, whether they listen to it while in Crow Pose or on the couch.

What listeners say about Open Your Heart

Would you try another book from Neal Pollack and/or Fred Stella?

Maybe. I liked the first book and thought this one would be as humorous and interesting. I was disappointed in this book in that there was too much stuff going on that was not of a mystery nature. Matt was kinda boring to be honest. Fred Stella was excellent in capturing the emotions.

Would you recommend Open Your Heart to your friends? Why or why not?

Hmmm. Not sure. It wasn't as good as the first book but if they were into yoga they would probably enjoy it. You definitely have to know yoga to understand this one.

I liked everything about his performance. He had the voices and inflections perfect.

Do you think Open Your Heart needs a follow-up book? Why or why not?

Yes, maybe one more book to capture the crazy Barlow and find out what the nutty Chelsea is all about. Matt needs closure like to go back to police work. What kind of life can you have living hand to mouth and smoking dope all day long. Go ahead Mr. :Pollack write one more.