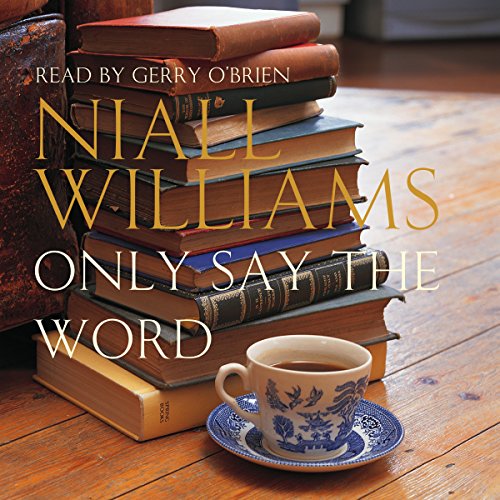 Only Say the Word

By: Niall Williams
Narrated by: Gerry O'Brien
Try for £0.00

Both a novel and a letter from a husband to his wife, Only Say the Word is a haunting, intimate testament to the enduring nature of love. Jim Foley loves his parents, his brother, his sister, Dickens, and God, although not necessarily in that order. Later, he loves Kate, enough to make her his wife; later still, he loves his children, Jack and Hannah.

This is Jim's story, from early days spent in County Clare to early adulthood in America, and back to Clare again. Tracing his journey from child to husband to father, from happy-ever-after to death-do-us-part, from beginnings to endings - and from there to starting afresh once more - it tells of the people and places in Jim's life, his hopes, fears, and fantasies, his ever-evolving relationships and the books that remain always constant.

Deeply-felt, beautifully-told, and written in Niall William's lyrical, lilting prose, Only Say the Word offers both acceptance of the past and hope for the future.

What listeners say about Only Say the Word

I had so thoroughly enjoy his book 'This is Happiness' - beautiful language, beautiful sentiments. But I found myself feeling anxious during this book, a profound sense of doom.

After reading Four Letters of Love by Niall Williams, I was unsure if he could capture my attention in the same way.
He certainly did. And yet again he sent my emotions on a rollercoaster, (which can be embarrassing sometimes, particularly when in public places).
As importantly, I cannot fault Gerry O’Brians narration. He reads with such passion and takes me right into every scene.
P.S ... I think I actually fell in love with Jim ... (but just a wee bit).