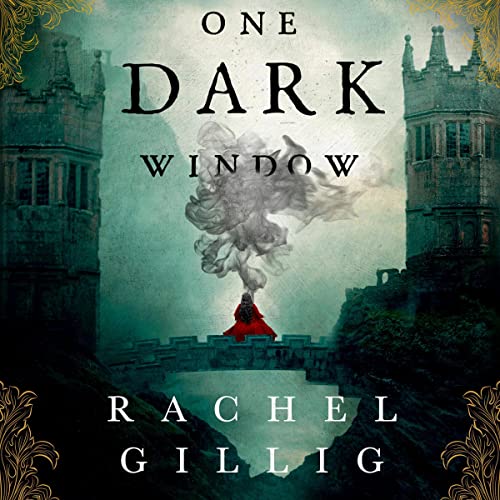 By: Rachel Gillig
Narrated by: Lisa Cordileone
Try for £0.00

ELSPETH NEEDS A MONSTER. THE MONSTER MIGHT BE HER.

An ancient, mercurial spirit is trapped inside Elspeth Spindle's head—she calls him the Nightmare. He protects her. He keeps her secrets. But nothing comes for free, especially magic.

When Elspeth meets a mysterious highwayman on the forest road, she is thrust into a world of shadow and deception. Together, they embark on a dangerous quest to cure the town of Blunder from the dark magic infecting it. As the stakes heighten and their undeniable attraction intensifies, Elspeth is forced to face her darkest secret yet: the Nightmare is slowly, darkly, taking over her mind. And she might not be able to stop him.

For fans of Uprooted and For the Wolf comes a gothic fantasy romance about a maiden who must unleash the monster within to save her kingdom.

What listeners say about One Dark Window

This book was highly rated by a TikTok reviewer, so I thought I would give it a go. I should have known better. The book is YA fiction. The characters are one-dimensional, irrational, and completely unbelievable. The story telling is linear, simplistic, and utterly dull. There is no complexity to anything about it - the language, the magic system, the writing style, all suggest the author has never read modern high fantasy or grimdark. The book might appeal to a teenage audience, but it has literally nothing to offer an adult reader / listener.

Added to this, the narration is horrible - I can't stand her voice.

This has become one of my favorites, it is obe of thows books you just don't want to have an end.

This book was FANTASTIC! Honestly I’m a bit old for YA but this was a great read & I would recommend it to any fantasy lover. I really enjoyed this world, magic has a cost & must be used wisely.

The balance has been thrown off. An ancient king bartered with magical forces to allow him to wield magic in his own way (together they forge a set of magical cards), which results in the people no longer communing with the magical forces directly. As a result this land is plagued by a mist that steals any person who is caught in it without a charm - if the people won’t come willingly, magic will take them by force! There is also a fever that strikes some children, leaving them with magical gifts, but the gifts slowly degenerate those inflicted. All children who catch the fever must be handed over to the authorities to be tested for magic & potentially put to death. Failure to hand over any child inflicted results in harsh punishment if caught. Even the use of the magical cards takes a toll on the user… all magic comes at a cost!

The world is interesting, the magical constructs & the politics of Court were really enjoyable. I also found our protagonists likeable & relatable - I could always understand their actions & they didn’t seem to illogically get in their own way. I was a bit put off when I found out this was the first in a series, often I find that series leave me feeling like I haven’t really got anywhere & have just read a big build up to the next instalment. Not the case with this at all! I am absolutely chomping at the bit for the next. That ending - chef’s kiss!

Really, really loved this book! The story was really great! I can’t wait for the next books in the series to come out

This is one of my favourite reads of the year. I was so sucked in. The magic system is based around a deck of cards which is such an interesting idea. There where so many characters to love (and a few to hate) the romance was just the right amount angst and reward. There’s court politics, a quest and family drama and it was all perfect so perfect and the ending was just… wow.
The narrator was really great, the internal voice of the ‘nightmare’ was done so well. Defiantly recommend.

I loved everything about this , the atmosphere, the writing and the magic systems were everything I could have wanted I didn’t want it to end , I am excited for the next book