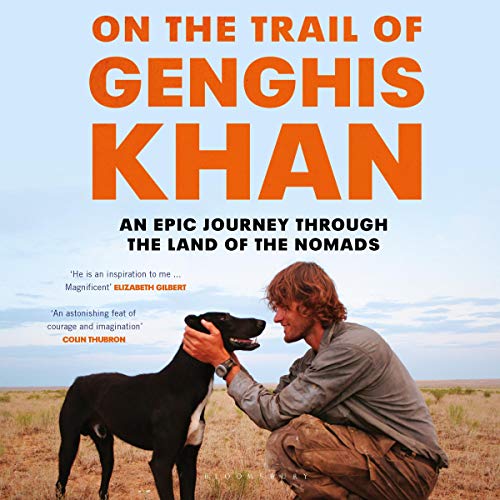 On the Trail of Genghis Khan

By: Tim Cope
Narrated by: Dugald Bruce-Lockhart
Try for £0.00

Bloomsbury presents On the Trail of Genghis Khan by Tim Cope, read by Dugald Bruce-Lockhart.

The relationship between man and horse on the Eurasian steppe gave rise to a succession of rich nomadic cultures. Among them were the Mongols of the 13th century - a small tribe, which, under the charismatic leadership of Genghis Khan, created the largest contiguous land empire in history. Inspired by the extraordinary life nomads still lead today, Tim Cope embarked on a journey that hadn’t been successfully completed since those times: to travel on horseback across the entire length of the Eurasian steppe, from Karakorum, the ancient capital of Mongolia, through Kazakhstan, Russia, Crimea and the Ukraine to the Danube River in Hungary.

From horse-riding novice to travelling three years and 10,000 kilometres on horseback, accompanied by his dog, Tigon, Tim learnt to fend off wolves and would-be horse-thieves, and grapple with the extremes of the steppe as he crossed sub-zero plateaux, the scorching deserts of Kazakhstan and the high-mountain passes of the Carpathians. Along the way, he was taken in by people who taught him the traditional ways and told him their recent history: Stalin's push for industrialisation brought calamity to the steppe and forced collectivism that in Kazakhstan alone led to the loss of several million livestock and the starvation of more than a million nomads. Today Cope bears witness to how the traditional ways hang precariously in the balance in the post-Soviet world.

"Tim Cope is a wise young man who knows how to travel, and why, and which details to record for the delight and enlightenment of his readers. I suspect that here we have a classic, likely to inspire generations yet unborn." (Dervla Murphy)

"Tim Cope’s exploration across the continents on horseback grew into a quest through history and then an odyssey deep into the human heart. In exploring some of the most remote places on earth, he brings us back to ourselves and to a better understanding of our place in the world today." (Jack Weatherford, author of Genghis Khan: And the Making of the Modern World)

"Three years, 10,000km and -30°C temperatures: Tim Cope’s horseback traverse of the Eurasian Steppe - Mongolia to Hungary - is full of hardship, characters and insights.... It’s a big undertaking for readers, too, but it opens up a vast, little-trodden world of history, danger and adventure." (Wanderlust)

What listeners say about On the Trail of Genghis Khan