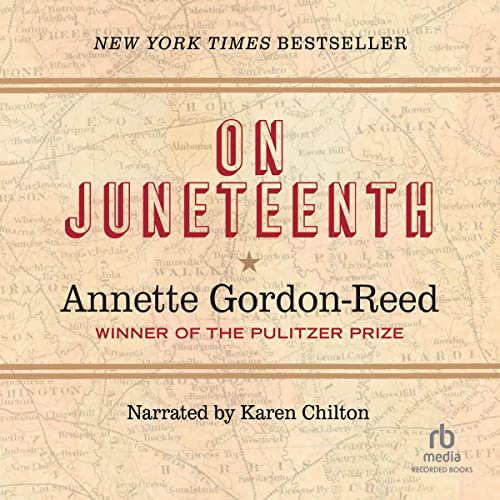 By: Annette Gordon-Reed
Narrated by: Karen Chilton
Try for £0.00

The essential, sweeping story of Juneteenth’s integral importance to American history, as told by a Pulitzer Prize-winning historian and Texas native.

Weaving together American history, dramatic family chronicle, and searing episodes of memoir, Annette Gordon-Reed’s On Juneteenth provides a historian’s view of the country’s long road to Juneteenth, recounting both its origins in Texas and the enormous hardships that African Americans have endured in the century since, from Reconstruction through Jim Crow and beyond.

All too aware of the stories of cowboys, ranchers, and oilmen that have long dominated the lore of the Lone Star State, Gordon-Reed - herself a Texas native and the descendant of enslaved people brought to Texas as early as the 1820s - forges a new and profoundly truthful narrative of her home state, with implications for us all. Combining personal anecdotes with poignant facts gleaned from the annals of American history, Gordon-Reed shows how, from the earliest presence of Black people in Texas to the day in Galveston on June 19, 1865, when Major General Gordon Granger announced the end of legalized slavery in the state, African Americans played an integral role in the Texas story.

Reworking the traditional “Alamo” framework, she powerfully demonstrates, among other things, that the slave- and race-based economy not only defined the fractious era of Texas independence but precipitated the Mexican-American War and, indeed, the Civil War itself. In its concision, eloquence, and clear presentation of history, On Juneteenth vitally revises conventional renderings of Texas and national history. As our nation verges on recognizing June 19 as a national holiday, On Juneteenth is both an essential account and a stark reminder that the fight for equality is exigent and ongoing.

What listeners say about On Juneteenth

A short but compelling combination of history and

It's very good and very informative, a minor work by an esteemed historian -- a collection of essays, really. The basic question that frames the book is, how she, both as a Black woman and as a historian, claim that she loves Texas given its racist history. Her answer takes her in a couple of directions: exploring the real history of Texas and how that history is -- and has been -- taught (her discussion of the Alamo is itself worth the price of admission); illuminating the history of African Americans in Texas from before it was a republic, through its admission into the United States, up to today; sharing her own experiences were growing up Black in Texas; and providing insight into the roles history and narrative play in how Texans see their state.

I enjoyed listening to it, learned a lot, and felt that I had spent in the company of a very smart, knowledgeable, candid, and gracious individual. It was definitely time well spent.

The narrator does a very solid job. There were a few moments of what I took to be small editing glitches -- unnaturally long pauses -- but nothing that interferes with enjoying the work. I have no reservations at all about recommending the book.

An ode to Texas

The only thing I enjoyed about this dry narrative was the narrator. This is not about Juneteenth at all. It is full of glowing anecdotes about the author's experiences coming of age in Texas.

I thought the book was going to be more than it was. I did learn More about Texas and some of the history behind the state. What she talked about Juneteenth for me, I knew.

I am a Historian and love to learn about African Americans deep ties to American. I learned so much about the History of TX and why it’s even more important now that Juneteenth is recognized around America. This book gets a 10 of 10! It’s a must read or listen!!

Beautifully written. Articulate and honest narration. Learning more about Juneteenth as an adult has a special meaning to. Thank you Mrs Gordon-Reed

Much more than June 19th

Superb, detailed - a wholistic and much needed approach to American History telling. Though painfully in parts, I applaud the research required to complete such a masterpiece.

What great history and fact sharing. Annette Gordon Reed, you did achieve that balance. Thank you very much.

Well-done explanation of a little known or understood Holiday

Gordon-Reed does an excellent job of weaving her personal history and appreciation of the Juneteenth Holiday with that of The Black Experience and the History of Texas before and after Emancipation.

She brings the ambiguity of her feelings about being Black in Texas into sharp focus, never turning away from its warts or shrinking from her warm feelings for her Home and Family Life. Because of this she has written a book that is not a cold Documentary History but rather a well-researched retelling of a moment in American History that, while intensely personal to her, is tremendously important for all of us regardless of race to understand and appreciate.

I learned a lot from reading this work and give it Four Stars. ****

This wonderful book has filled a void in my understanding of history. The book lifts up the voices and experiences of Black people. I strongly recommend this book for anyone interested in US/Texas history.

The narrator, Karen Chilton, has done a great work to present the essay. I was so pleased that she is identified as a member of SAG-AFTRA!