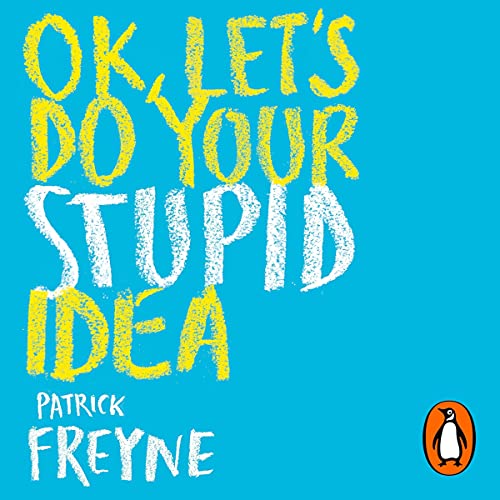 OK, Let's Do Your Stupid Idea

Patrick Freyne has tried a lot of stupid ideas in his life. Now, in his scintillating debut, he is here to tell you about them: like the time (aged five) he opened a gate and let a horse out of its field, just to see what would happen; or the time (aged 19) he jumped out of a plane for charity, even though he didn't much care about the charity and was sure he'd end up dead; or the time (aged old enough to know better) he used a magazine as a funnel for fuel when the petrol cap on his band's van broke.

He has also learned a few things: about the power of group song; about the beauty of physically caring for another human being; about childlessness; about losing friends far too young. Life as seen through the eyes of Patrick Freyne is stranger, funnier and a lot more interesting than life as we generally know it. Like David Sedaris or Nora Ephron, he creates an environment all his own - fundamentally comic, sometimes moving, always deeply humane. OK, Let's Do Your Stupid Idea is a joyous listening experience from an instantly essential new writer.

What listeners say about OK, Let's Do Your Stupid Idea

Be wary of listening in public

I made the mistake of listening to this book while on a walk. The book had me laughing loudly and then towards the end crying uncontrollably

Real life is hard, but easier if you can see the funny side. Patrick manages this, even in the darkest of hours.

Returning it, can’t listen to the authors’s voice

I love Patrick Freyne writing in the Irish Times, but I don’t really understand how anyone thinks this book is funny, it’s just like the ordinary memories any child would have.

I am not 100% how I feel about this book.
some parts had me really interested, other parts had me nearly falling asleep.
Basically just stories about him as he grew up, some serious and some not at all.
If you want something light to read, this is probably perfect for you.

I love Patrick Freyne as a columnist and his book is wonderful. Funny and full of heart. It made me want to be friends with him.

Easy listening. Author narrates in a very genuine and humble way. Funny at times. Creates strong nostalgia for any one born in late 70's.

Loved every minute with Patrick Freyne! Funny, insightful and touching! I hope he’s a prolific essayist and another one so soon!!