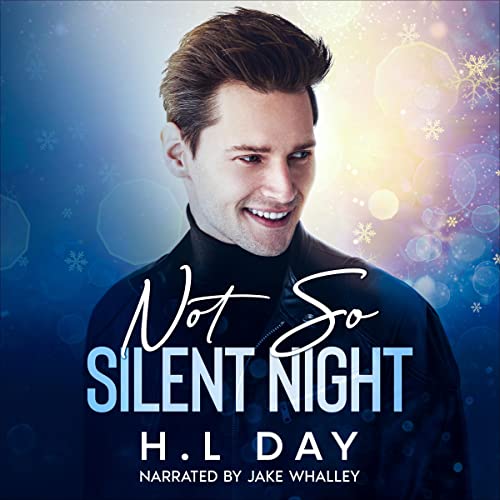 Not So Silent Night

Things aren’t great for Xander Cole. It’s Christmas, he’s fractured his pelvis on a skiing trip he never wanted to go on, and his on/off boyfriend is most definitely off. No wonder he’s not exactly full of festive cheer.

Ferris Night isn’t having much luck either. His plan to take a break from work before starting a new job has been wrecked by a flooded flat. With nowhere to stay, he grabs the opportunity for a job as a live-in nurse with both hands. After all, how hard can it be?

Xander doesn’t need a nurse. Especially one who’s far too flirty, far too attractive, far too into Christmas, and far too good at getting his own way. But Ferris has never faced a challenge that couldn’t be overcome with a bit of charm and perseverance. It doesn’t matter how attractive Xander might be. He’s immune. Maybe.

As banter and sparring between the two men turn into more, a nurse might not be needed, but both men could be in for a fresh start to the new year.

A low angst 63k romantic comedy, which features snarky banter, a slow burn relationship, two men who can give as good as they get, an annoying ex, and a Star Wars nativity scene.

*Please note that this story was originally released as a single POV short story as part of the Winter Wonderland Prolific Works giveaway. The story has been revised and is now dual POV with over 40k of added content*

What listeners say about Not So Silent Night

A famous model with an egocentric boyfriend, finds himself in a bind. Ferris needs a place to stay and finds a temporary job with a room included. Xander will get more than just health care from the sweet nurse. It’s a lovely and fun story to warm up for the holidays!

WOW.......... Absolute winner for Christmas puts you in a very festive and happy mood simply love the book by HL Day and in audio Jake Whalley's narration is so fantastic love the way he brings Xander and Ferris to life they are amazing together the fun the banter, the flirting a touch of cranky but ever so sexy the chemistry between them is so hot it sizzles such a perfect present for someone special loved it can't recommend enough. ❤

Xander is a grumpy curmudgeon who most definitely doesn't need a nurse after his skiing accident, thank you very much.
Ferris is in a bit of a jam and jumps at the opportunity to get Xander back on his feet.
He's also the perfect foil to Xander because he simply doesn't put up with his excuses and slowly pulls him out of his shell and brings color and joy into his life in hilarious Technicolor Christmas style.
A perfect holiday romance full of humor and sweet flirtatiousness.
Jake Whalley did a wonderful job narrating and bringing the story to life.

Not Just For Christmas.

MM, Holiday Themed, Contemporary, Romance. Stand-alone and extremely easy to listen to this witty and humourous story also has plenty of wit and heat. Narrated fantastically and extremely easy on the ear, I thoroughly enjoyed listening to their story and glad that they finally got their guaranteed HEA.

I really enjoyed this sweet romantic comedy. It was sweet, lighthearted and funny. I loved the mcs banter and seeing them falling in love. off course there has to be a bit of romantic comedy drama as well. complete with a sweet and funny reunion scene. so, if you're in the mood for something light and funny for Christmas, this is your book.
both the author and narrator where new to me and I'm definitely going to look up more books by both of them.

Story line was okay and certain voices of narrator

Story line was okay and certain voices of narrator. Unfortunately, part way through I remembered who the narrators voice sounded like. It reminded me of a programme the kids watch called Thomas the tank engine and after that I couldn't get the idea out of my head. The voice of the second character was good. Story line was good and I loved the sense of humour throughout.

Having broken some bones in a skiing accident, Xander Cole is abandoned by his self-centred boyfriend just before Christmas. When Ferris Night’s apartment floods, working as a live-in nurse to Xander over Christmas would solve his temporary housing crisis and family issues - if only he could convince Xander to let him stay! Xander would just like to be left alone to wallow so a perky nurse who insists he does his physio exercises is the last thing he wants. This is the second romcom I’ve listened to by HL Day and I absolutely loved it! The forced-proximity romance is basically a two-person comedy with a few occasional cameos and I loved spending time with Xander and Jake, they were thoroughly decent guys. The hilarious banter between Xander and Ferris was like an entertaining tennis match, with shots back and forth at speed, especially with British audio narrator Jake Whalley’s delivering the lines so well - he’s a great performer and a firm favourite!

I adored this sweet, but snarky, Christmas story.

This was a sweet, low-angst Christmas story where the best part, along with the magic of love at Christmas, was the first-class snark and banter between Xander and Ferris.
Xander is recovering from a skiing accident and a broken pelvis, when his brother needs to leave for a few weeks leading to Christmas he decides a live-in nurse is needed,, despite Xander’s vehement protests. Ferris is between jobs and homes, and with a flooded apartment, a live-in nurse position is just what he needs.
Their coexistence is absolutely hilarious from the very first meeting and things just become more funny (and, well, heated) as the story progresses.
Always a pleasere listening to a well-written book, narrated by the very talented Mr. Jake Whalley!

Very enjoyable audio.The narration was quite good. There was one secondary character Mia that was just over the top and a bit annoying. Definitely a slow burn,

An injured model and his new nurse/caretaker get off to a bumpy start but soon find themselves liking each other.

The narration and accents sounded very authentic to me and made me feel like I was in England.

It was fun watching them get to know each other. Also, watching Ferris going a little Christmas crazy and forcing Zander to embrace the joy of the season was delightful.

This is a high fun, low angst sweet Christmas story.

I enjoyed Not So Silent Night the first time I read it, but whether it was the narrator’s performance enhancing the story or getting to revisit a fun holiday read and reconnecting with entertaining characters, I liked this book even more the second time through.

Xander and Ferris are such an unexpected but great pairing, and I was once again caught up in this forced proximity holiday story. I loved the back-and-forth banter between these two and enjoyed watching Ferris steadily win Xander over in his Christmas celebrations as well as falling in love. While there are certainly some silly moments in Not So Silent Night, this romantic comedy doesn’t stray far into the ridiculous or over-the-top scenarios at all. Instead, the story is sweet, snarky, and uplifting. I don’t think there was a time I listened to it that I didn’t find myself smiling.

Narrator wise, Jake Whalley is a great fit for the tone of Not So Silent Night, with a good variance to his voices that made it easy to follow along and get lost in the story. His performance brought the story and scenes to life, ensuring this was a fun listen that’s easy to recommend for the holiday season or whenever you are in need of a mood boost.

Humor, snark, heat and heart for the holidays!!

This is a super fun holiday read, all about the grumpy/sunshine snark, heat and forced proximity. Xander has every reason to be grumpy — a fractured pelvis, an ex-boyfriend who abandoned him in a hospital abroad, and his brother engages a live in nurse to stay with him over the holidays without telling him. But Nurse Ferris has an abundant supply of cheer and witty comebacks, an insatiable penchant for Christmas spirit and decorations, and he’s HOT… I loved every moment of this low angst story, and it definitely got me in the mood for the season! The narration by Jake Whalley was spot on for these characters.

Loved the story, enjoyed the narration

I loved the story when I read it, so I was quite excited to listen to Xander and Ferris snark/banter their way to love. I was not disappointed :)
Listening to Ferris get the better of grumpy Xander was a lot of fun! Jake Whalley captured his snarky, no-nonsense, but caring tone. Xander, once he got over being a grumpy guts, gave as good as he got 😀 It's always nice to listen to a good narration of book that that you loved reading - this is no exception.
Jake Whalley really breathed life into the character's chemistry and snappy dialogue. Definitely recommend!

Not So Silent Night is an enjoyable story that had me laughing out loud on several occasions. Zander was in need of a nurse to help him with his recovery from a skiing accident. Ferris was in need of a place to stay and through luck and fate he found himself on Zander's doorstep willing to help. I loved these two characters together. They had a certain spark and snark from the very beginning. This is definitely a book to listen to/read every holiday season. Definitely recommend!
Narrator Jake Whalley does an amazing job.