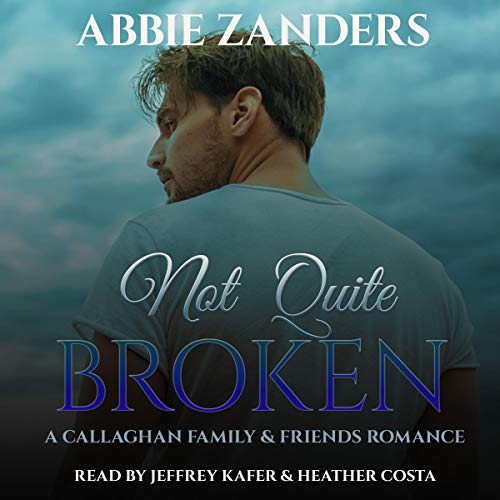 By: Abbie Zanders
Narrated by: Jeffrey Kafer,Heather Costa
Try for £0.00

Every day is a struggle for Brian McCain. Betrayed by his best friend and abandoned by his country, he feels broken and unable to connect with anyone. But Tori Donovan is different. She shines a light into his darkness and keeps the demons at bay, at least for a little while.

Tori has demons of her own. All her life, she’s been let down by those who should have been protecting her. She’s learned the only one she can depend on is herself. Brian might be the exception. He’s a great guy, everything she’s looking for, but he’s too caught up in his own problems to see the truth.

When their relationship goes beyond friendship, Brian thinks the best option is to walk away. Tori’s sudden and unexpected disappearance is the wake-up call he needs, and Brian learns he’s not as alone or as broken as he thought.

Please note: Not Quite Broken was previously published as part of the USA Today best-selling anthology Love Under Siege. This single-title edition is not significantly different.

What listeners say about Not Quite Broken

I loved the ebook and was looking forward to the audio version. I did wonder about dual narration initially though as I haven't liked it in another author's books, but really enjoyed these two narrators. I hadn't heard Jeffery Kafer before either and wondered if he would as good as the narrator of Ms Zanders's other books - yes, he was and I'll look out for other books narrated by him. Heather Costa was equally good too. I'll look out for other work by her also. Well worth the listen.

I was captured from the start of the book. This is the first book, I have read/listened to, and I promise it will the first of many. In this book both of the characters are broken and eventually overcome their fears, and found true love and support of family and friends.

I originally read this as part of the Love Under Siege anthology (brilliant) in 2018, I loved it then & listening to the audio version now has only cemented that feeling & re-enforced what a great author Abbie Zanders is especially when tackling some hard-hitting & harrowing themes.
Suspenseful & filled with emotion, love, family, tragedy & hope. Kindred spirits Brian McCain & Tori Donovan are damaged souls but as the title says not quite broken. Their relationship starts as a friendship based on a mutual love of fitness & the outdoors & grows into something more. Tori shaped by the trauma of her past dreams of a future with Brian but struggling with PTSD & haunted by the demons from his time in captivity Brian truly believes he doesn’t deserve happiness with Tori & that she will be better off without him so pushes her away & inadvertently straight into danger.
Finally coming to his senses & realising Tori is exactly what he wants & needs Brian races against time to save Tori to give them the chance at the HEA they both deserve but will he be in time?
Always great to catch-up with the Callaghans as they help Brian in the race to find Tori before tragedy strikes.
A highly recommended 5* read/listen filled with everything you need to keep you fully immersed in the story. Added bonus the audio version is beautifully narrated by Jeffrey Kaveri & Heather Costa.

Loved it !! this story. the narrator is so fantastic it's like your really there!! After listening to this story,. I totally enjoyed reading this book. It’s well written and the characters were uniquely fantastic. I would suggest this book to my friends that like this sort of genera. this was a good book. The narrator was great.

Get comfortable and cozy. Great read.

Abbie does a solid on Brian's story.
Next to Jake & Taryn's story this one rocks.

So in love with Brian’s story 💕

Brian and Tori thought that because they both had horrible past, there was no way for a future. It took almost losing her to realize what she was to him. There were a lot of sweet times between them as they began as just friends. They were both adventurous and love the outdoors. As far as compatibility, I think they are closer than any of this series!

I believe that this Book, would be one of many Stories of which people who are have suffered, suffering or servived(ing) some forms of Mental Health, Abuse, shame, physical scares & Emotional Scarring .
To know that you can Have true unconstitutional, all excepting LOVE & Real FAMILY and FRIEND'.
Also Where some of us KNOW...
That we can find HOPE & STRENGTH in LOVE ~

I enjoyed this audible book. Having listened to the entire Callaghan series, I did miss Aiden Snow as a narrator. His imprint on the characters masculine voices and the smooth transition to the female characters left me wanting to hear him instead. It was a fresh change though. Just hard switching gears and hearing characters I have grown to love in a different flow off of the page. I very much enjoy Jeffrey Kaefer in the VC Warrior's series and Heather Costa added a nice feminine touch to Tori's voice and inner monologue. Well done all around :)

This was my second book by Ms. Zanders. The story was great and had a easy flow. The narrators were good they had range. I will definitely listen to and read another book from this author.

I Loved this story. Lacey's M.I.A. Brother Brian was rescued in "Beyond Affection". Now he gets his own story and his own HEA. Tori has her own traumas to deal with and somehow they end up being perfect for each other. Another amazing Callaghan brothers story.

the male voice resembling that of a "Dick Tracy" radio show. Monotone and boring love the story this happens to be one of the better extensions of the Callahan family stories. what the hell is a quah