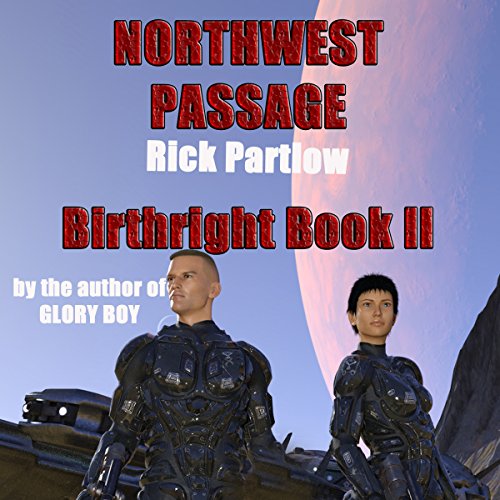 By: Rick Partlow
Narrated by: Evan Harris
Try for £0.00

Caleb Mitchell and his friends return in the sequel to the thrilling cyberpunk space opera Birthright!

Former military super-commando Cal Mitchell is enjoying the pastoral life on his remote star colony home of Canaan, having put the fight against the Corporate Council behind him. But his past comes back to haunt him when a hired assassin makes an attempt on his life. On the heels of this threat, his old friend and former partner Deke Conner and DSI agent Kara McIntire arrive to warn him of a new conspiracy by old enemies, and this time the stakes are no lower than the fate of the galaxy. The hunt is on for the fabled Northwest Passage, the extra-dimensional pathway that will give its discoverer access to the rest of the universe…and perhaps to the magical technology of the long-lost Predecessors, an ancient race of aliens who left behind an incredible legacy of terraformed worlds and wormhole passages.

The quest for the Northwest Passage will take Caleb and his friends and family to the farthest reaches of the Commonwealth and beyond into the unknown, where the prize for success may be an even darker fate than the price of failure.

What listeners say about Northwest Passage

To date, I've read just about everything Rick Partlow has written and have enjoyed his work tremendously. I've become a Rick Partlow fan...

Delightfully detailed believable action sequences in a consistent Universe , Northwest Passage is a continuation of Glory Boy. Partlow has become one of my few ‘grab it first’ authors because of his great skill in crafting characters, his genius at world creation and his ability to write a compelling story line.

Awesome way to push the outer bounds of reality and still be mentally and physically tangible. continuing the story line from the first book and grinding teeth to hear the last in its series. I dig the mix of attorney with a gritty military grade realism and nuance to drive a story that fits my psyche... perhaps it's not for everyone, but it speaks to my inner child that has to grow up; guns blazing and retractable talons and all! one small quip to the author would be the cut/paste use to provide flashbacks between books... it would be cooler to cut/"paste from another perspective" as he's done throughout the novel in its real-time.

Narration is great, however his style is just short relative to other narrators. there are subtle nuances that I experienced from listening to Glory Boy (the definitive start point should you get to this book) that I kind of wish were present in this reading. The sighs, snickers, and scoffs are miniscule but so very effective. The recording of this piece had lots of noticeable cuts where you can visualize the narrator pausing not just for a moment, but break for lunch, go to sleep, come back refreshed, grab a drink, and whatever you want to mentally imagine... while that works great for someone with ADHD... it could be distracting