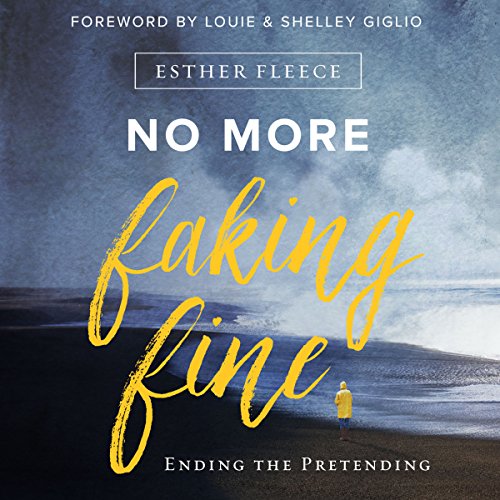 Scripture reveals a God who meets us where we are, not where we pretend to be. No More Faking Fine is your invitation to get gut-level honest with God through the life-giving language of lament.

If you've ever been given empty clichés during challenging times, you know how painful it can feel to be misunderstood by well-meaning people. When life hurts hard, we often feel pressure - from others and ourselves - to keep it together, to suck it up, or pray it away. But Scripture reveals a God who lovingly invites us to give honest voice to our emotions when life hurts hard.

For most of her life, Esther Fleece Allen believed she could bypass the painful emotions of her broken past by shutting them down altogether. She was known by all as an achiever and an overcomer on the fast track to success. But in silencing her pain, she robbed herself of the opportunity to be healed. Maybe you've done the same.

Esther's journey into healing began when she discovered that God has given us a real-world way to deal with our raw emotions and an alternative to the coping mechanisms that end up causing more pain. It's called lament - the gut-level, honest prayer that God never ignores, never silences, and never wastes.

No More Faking Fine is your permission to lament, taking you on a journey down the unexpected pathway to true intimacy with God. Drawing from careful biblical study and hard-won insight, Esther reveals how to use God's own language to come closer to him as he leads us through our pain to the light on the other side.

And, like Esther, you'll soon find that when one person stops faking fine, it gives permission to everyone else to do the same.

What listeners say about No More Faking Fine

This Book Is A Huge Gift from God

It's been a Long time since a book has so deeply moved me and No More Faking Fine changed me. Esther Fleece's story, and her experiences with Lamentations-- a forgotten and therapeutic gift from God--moved me to try it myself. To look up Lamentations in holy scripture, and to shift in ways that no healing techniques could ever take me to. I am a different , better, freer soul because of this book. I'm so Thankful my sister shared this with me! I am so Grateful the author took the time to write her real experiences and thoughts on Lamentations power to transform pain into new visions. I'm sharing this book with everyone I feel called to share it with! Transforming !!!

Life changing book - if we let it be!

The way I came to have this book was not a purposeful act on my part. I had recently tried to recommend a different book to a friend, but i initially botched the title. I guess in trying to find my recommendation, she found this and graciously gifted me a copy of "No More Faking Fine." What a gift it was. I honestly thought I had worked through and forgiven all the pain and trauma I experienced in my life. Little did I know that I was still clinging to some of those experiences and they were manifesting as fear in my current walk! THANK GOD for Esther Fleece and her willingness to share her story and to be transparent and vulnerable to help others. I have gifted this book to SEVERAL people, with others on my list as God guides me. Thank you Esther!

Finally a Christian book without the fluff

I have searched for books on spiritual warfare and stories that lay bare the ferocity of grief, tragedy and recovery and the havoc it can wreak on our faith. Typically you get tales of woe and how prayer fixed it all or somehow magically allowed the person to wrap their head around the 'why' of it all. The underlying message of such tales is that resignation or powering through will lead to actual healing. All it really does is delude us into believing we've grown beyond the pain and matured in faith and worse, that we are now in a position to guide others through recovery. Thankfully this book deviates into a significant set of truths that are so inconvenient and uncomfortable for the traditional church that they are rarely, if ever, addressed honestly even in small group settings. It's truly a one of a kind in Christian self-help. The myth that self-help in Christianity means waiting on God is tragically short-sighted and stunts spiritual growth. I was glad to hear the author challenge that with the darker side of lament without sugar coating what lament itself will put you through. The guidance of the author's scripture based prayers peppered throughout the chapters provides the words to pray when all you can do is cry in silence or question God's love and faithfulness. Her honestly allows you to feel supported, in community and (probably most importantly), whole when you allow yourself to lament.

Side note: The narration always gets high marks from me when I forget that the narrator is not the author. Such was the case with this piece.

My heart is glad

This book opened up my heart to how I want to be closer to God and how he has always wanted to be closer to me.... It has allowed me to be able to communicate better with Him... and others. I truly enjoyed and will pass on to others.

Who would have ever dreamed that the pretending I learned as a child would nearly kill me as an adult. I had lived so long in the land of make-believe that I could not deal with the actual realities of my own life. God called me out of that pretense almost 6 years ago now and has loved my heart back to life. I only wish He had done it earlier. Maybe He tried to. I'm just so thankful that Esther was brave enough to put her journey of lament into writing or speaking as it is. I never want to fake fine- ever again.
With a grateful heart! Laura S.

Loved the reminders that Im just hiding my hurts and fears behind my busy crazy life, but beyond that an admonition to stop faking fine and dive into those hurts and fears. They are holding us back , not only from a better life, but from a deeper relationship with God.

A must read for EVERYONE

I was fortunate to hear Esther speak at my church, which lead me to buy her book last year. However I realized I kept buying physical books and not reading them. So this year I bought the audio version too and just finished it during my LA commuting. It’s a quick easy listen as Esther does an incredible job sharing personal life stories and the topic of lament. I honestly had not even heard of lament until I heard her speak and know ANYONE who reads/listens to this book will be blessed!
I think the church does a disservice by not addressing lament more and our culture pushes us through pain and mourning. Esther’s No More Faking Fine gave me permission to live in the dichotomy of loss, pain, sorrow, grief, mourning while still being able to find joy and love and laughter in life.
As the audio book was coming to an end I had a long cry and conversation with God about things I had been holding onto for years. I really felt Esther’s words and Gods grace finally freed me of past hurts I had been holding onto. This book is a must read for EVERYONE!
Thank you Esther for finding purpose in your pain by having courage to write and share this book with all of us. Xx

From pain to purpose

This is a touching story - one that gently guided a young women to know true love from Her true Father. Keep sharing Esther. This is a message we all need to hear.

just what I needed

This narrative was just what I needed to hear. There is hope for my situation. She is very transparent about the struggles and emotions in her journey. I have permission to feel the pain of my situation, now. I have been lamenting and didn't realize it. I am relieved to hear that it is part of the healing, and that I'm not some crazy lady! Thank you for your real-ness.

Great Book to listen too

Felt as if it helped me understand how I felt years back and confirmed God always been with me.