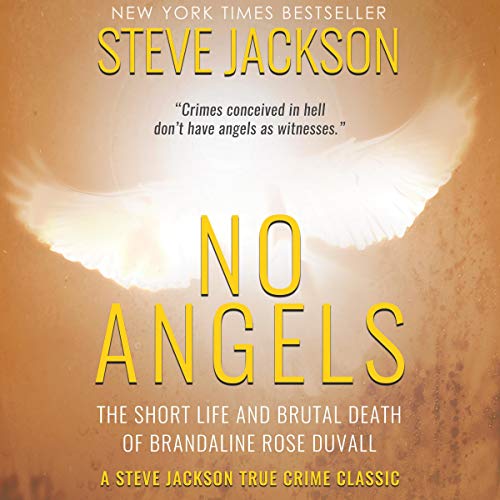 By: Steve Jackson
Narrated by: Kevin Pierce
Try for £0.00

A little before midnight on May 30, 1997, 14-year-old Brandy DuVall waited at a bus stop in the Denver area for a ride back to her grandparents' home after spending the evening at a friend’s home. She was wearing a bright-red Chicago Bulls jersey bearing the number of her favorite player Michael Jordan.

It was the shirt, a favorite of the Bloods gang, that attracted the five young gang members in the car that circled the block and came back to where she stood.

Why Brandy got in the car that night would remain an unanswered question. Was it voluntary? Was she abducted?

Whatever the answer, the consequence was an unimaginable nightmare of torture, rape, and murder at the hands of a vicious Denver street gang, particularly “Pancho”, a violent psychopath, and other members of the Deuce-Seven.

The crime, the investigation, the betrayals, and deals cut with the devil, and the subsequent court cases, including four murder trials and two death penalty hearings, tore apart families and affected all who were caught up in the brutal crime and its aftermath.

Now, 20 years after, he first wrote about this horrific true crime, New York Times best-selling author Steve Jackson returns with No Angels, a gripping narrative delving into the circumstances that would forever change the fate of Brandy, two previously inseparable brothers, and the mothers who sat on opposite sides of the courtroom and yet shared a common grief.

What listeners say about No Angels

The ugly truth we try to avoid

....as a country, we plan for the uture with an unfathomable misunderstanding that it should be that way. Until we face the fact the only fix is accountability from the 1st day of life for every single american...no one has the right to bad parenting nor does the government have a right to deny each and every citizen the guidance and support into an acceptable, positive and safe life. There will always be 4-8% of those with prrsonality disorders that dictate the need for a controlled and monitored life but we must find positive, productive environments where they are unable to harm mentally and physically while contributing to that very support thru productivity. The future will depend on very big changes.....i agree, everyone should be forced to hear and see the evidence of this crime....sad sad sad....thanks for writing this book....

Masterfully put together by an author I admire. I don't think there is a book of his I haven't read.
This one is especially sad on so many levels and brutal beyond comprehension.
No spoilers but once I started I listened to completion.
Steve Jackson puts his whole heart and soul in these cases and the empathy he feels comes across to the reader, but not at the expense of a solid read. You get as complete a picture as is possible.
I recommend any of his true crime books and hope he keeps them coming.
Kevin Pierce- well, there is nobody like him!

This story had me shook to my core. The painful account of what happened to Brandy will help you put into focus what really is important when raising and protecting your children out here in this world. This was superbly written by Steve Jackson and what if Perfection in narration was a person, it would be Kevin Pierce.

I love to hear narration by Kevin Pierce
Steve Jackson at his best ,so emotional

This account of the rape and murder of young Brandaline Duvall shakes one to the core.

The tsunami of characters overwhelms the listener at first, but the final two-thirds of the book is compelling.

Kevin Pierce is his usual sanguine self.

If there's anything that you can take away from this story is that good parenting is vital, don't do drugs, and stay clear of gangs. A 14 year old girl looking to get drugs from the neighborhood gang meets a gruesome end. This could have been avoided if she and the gang members had received good parenting. Truly sad case that I hope people learn from.

I have read many I mean many a true crime story, but Steve Jackson is so forthright so honest and does his research you feel like you were there At exactly the moment the perpetrators made the decision to go from thinking about it to actually doing it. I love the way he focuses on the victims. The narrator has just the right amount of emotions without making it feel like it’s a documentary, but not like he’s going to burst into tears at any moment with the telling of the story. Excellent read – or rather… Listen.

The narrator's voice catches listener's attention captivating and Lovely And heartfelt story
definitely will recommend it!

This book is one of the most detailed books I’ve listened to in a while! The tragic murder and death of that 14 year old girl was horrible and unimaginable! The author does a great job on providing a perspective from the victims family as well as the family of the murderers and how their lives will forever be changed. I hope that if young people read this book, they don’t look to glorify the gang life but rather get a good feel for the consequences of these heinous crimes and the lasting consequences for the victims families.
Also it took me a while to get used to the narrator. His voice just didn’t seem the match up with the language that was being used in my opinion. Overall I think this was a book I didn’t want to put down.