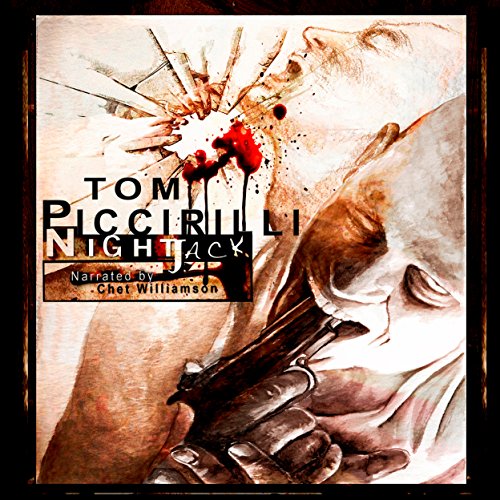 By: Tom Piccirilli
Narrated by: Chet Williamson
Try for £0.00

On the day of his release from a mental institution, Pace is taken "hostage" by Faust, Pia, and Hayden, three escapees from the hospital who disappeared after the presumed rape and beating of Cassandra Kaltzas, daughter of the Greek munitions tycoon Alexandra Kaltzas.

Each suffers from Multiple Personality Disorder, experiencing complex delusions and sometimes fantastical identities. Pace tries to piece together what happened when apparently one of their alternate personalities tried to kill Cassandra.

Pace himself is an alternate of William Pacella, a man whose wife died in a restaurant fire set by a local mobster for insurance money. William Pacella "dies" so that Nightjack can be born - a new personality who may or may not be Jack the Ripper.

For unknown reasons, Pace is able to see others' delusions - when alternates take over members of the group, Pace alone is able to interact with each persona. Included among them is Princess Eirrin, a 10,000-year-old sorceress and heir to the Atlantean throne; Smoker, a half-breed gunman from 1880s Arizona; Thaddeus, friend and companion to St. Paul; and the ancient Greek architect Daedalus, who soared among the clouds with his home-made wax wings and watched his son perish in the sea.

Now the four find themselves under attack from assassins sent by Kaltzas to punish the person who attacked his daughter. Conflicting stories abound about Cassandra - whether she was raped, if she was perhaps murdered, or if she and Pace somehow crossed paths even before the hospital. In fact, she may not even exist.

As the attacks persist, the group is forced to face their own personal traumas and terrors, and go in search of Kaltzas in Greece. There, on an island where fantasy, myth, and truth are all entangled, Pace and his many alternates must sift through madness and deceit to unlock the mystery. And everyone may wind up dead unless Pace willingly unleashes the most brutal killer of all: Nightjack.

What listeners say about NightJack