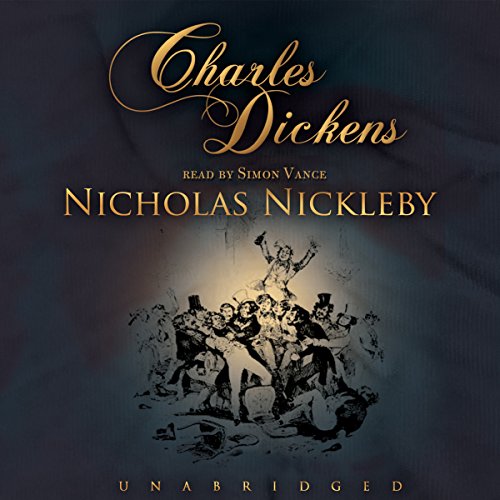 By: Charles Dickens
Narrated by: Simon Vance
Try for £0.00

The most gorgeously theatrical of all Dickens's novels, Nicholas Nickleby follows the delightful adventures of a hearty young hero in 19th-century England. Nicholas, a gentleman's son fallen upon hard times, must set out to make his way in the world. His journey is accompanied by some of the most swaggering scoundrels and unforgettable eccentrics in Dickens's pantheon.

From the dungeon-like Yorkshire boys' boarding school run by the cruel Wackford Squeers to the high-spirited stage of Vincent Crummles' extraordinary acting troupe, Nicholas Nickleby is a triumph of the imagination, bursting with color, humor, and poignant social commentary.

What listeners say about Nicholas Nickleby

Incredible diversity in the actor's voice

This should be a nailed on hit. Dickens is one of the world's favourite authors and Simon Vance is one of the best readers on audible.

But sadly Nicholas Nickleby is not one of the master's best. It rambles along through over sixty episodes and some of them are a complete sidetrack from the story. One whole chapter is given over to a tirade against the piracy of his work by 'dramatists' who are abusing the authors work. Whilst it was interesting to hear that 175 years ago Dickens was struggling to protect his intellectual property, it didn't add to the story.

Meanwhile Simon Vance was not at his best either. Most of his stock voices are ready and welcome, but for the kindly Yorkshire farmer Simon wanders the British Isles for his accent. Sometimes he is geordie, at other times welsh and often Scottish. What he never achieves is the lilting North Yorkshire country voice which John deserves.

So this is value for money - it's long for the price - and important if you want the whole of Dickens' work but don't make it a priority.

Not one of his best

I must admit that I struggled to really connect with this novel .
This is despite having read and enjoyed many of Dickens novels there seemed to be a shallow feel to it which the excellent narration struggled to bring to life.Not one that I shall read again I'm afraid.

I decided to go through the works of Charles Dickens during the spate of lockdowns. Simon Vance’s performance and voice characterisations thoroughly engaged me throughout this story.

loved it
hard to say which is the best story.
The Yorkshire accent needs some work.

Another story peopled with memorable characters and familiar tropes. I find his novels always more engrossing when I hear them read aloud. This recording is fine though it jars in one respect which is the appalling “Yorkshire “accents. I can only think that nobody listened while it was being recorded. However they only appear from time to time and we got along nicely the rest of the time.

Story telling at its best

Not only a classic piece of literature, but also nicely read by Simon Vance.... the most outstandingly awesome Yorkshire accent ever (Note - I don't say it's a good Yorkshire accent, but it is most amazing. Really. )

Dickens at his best

What made the experience of listening to Nicholas Nickleby the most enjoyable?

Which character – as performed by Simon Vance – was your favourite?

Listening to this long story made me appreciate Dickens' Victorian verbosity. The language is so amazing compared with today, but it has a beauty to behold. It would have been the EastEnders of those days, brought out as a series in a magazine, with cliff-hangers at the end of most chapters. Quite convoluted regarding who was who though, and a bit of a coincidence when some of the characters met up later in the book to bring about the denoument of the plot.

This book is so little known and should be on the best seller list!!! It is riveting. If you are a fan of classic 19th century literature, you will love it. Nicholas and his sister overcome incredible odds set against them by their unscrupulous Uncle to grow and thrive after losing their father and all financial support. They are devoted to their mother, who is silly and absurd. Touching love stories abound, and the princes rescue the damsels in distress. This is truly a great and enjoyable book with happy endings for the good guys and justice for the bad guys.

Thirty-one hours of pure unalloyed pleasure. The reader is a genius.

This is my favorite of all the Dickens novels, and Nicholas is my favorite of all Dickens heroes! I do love David Copperfield, of course, but Nicholas has my heart. I realize the characters Dickens creates are pretty, schmaltzy, is that the word?, but I love them, and I wish I could meet somebody like Nicholas Nickleby. Though the end is, of course, predictable, it is the happily-ever-after ending I always love from Dickens.

Robert is right-on. Sheer delight. The reader makes this wonderful book even more alive than on the page. If you like early Dickens, this audiobook is a must.

This was the first Dickens I've downloaded, and I can't wait to hear others. The characters and situations sometimes made me laugh out loud and Dickens' understanding of human nature is always right on the mark. This narrator is so gifted - his voices were perfect for male and female characters alike and all were easy to distinguish and truly delightful. A joy.

A classic story and a great listen

I liked this audio book very much. The narration was excellent, with very consistent characterisations throughout.

The story is a classic, and although, in my opinion, it doesn't have the depth and humour of David Copperfield, it is a very engaging story on many levels.

I don't hesitate recommending this audiobook to anyone who wants to dip their toe into a Dickens novel, and I'd recommend also listening to David Copperfield (Unabridged)at some time after this for a complete Charles Dickens experience

The story is just what you expect from Dickens: some memorable characters (the villainous ones are especially memorable); a somewhat complex interweaving of plots leading to surprising discoveries about birth and parentage; some good women who are rather insipid; some sickly sentimentality, especially regarding a brother-sister relationship; a poignant young death; justice to the villains; a happy ending; and much wonderful prose. The reading is excellent. My only complaint is that the plaintiveness of Smyke and the Yorkshire accent of John B. is a little overdone. But this is minor. Dickens is a very great writer, and Simon Vance does him justice.

Really a gem of a book. Nicholas Nickleby is one of my all-time favorite Dickens characters, you will absolutely fall in love with him. Great story, with a wonderful array of quirky characters, extremely villanous villans and exceptionally virtuous heros. Very entertaining!

Another excellent novel by Charles Dickens! Sympathetic and noble Nicholas attempts to find his fortune in an interesting array of life styles which compose jolly old England. Narrated by Robert Whitfield, this novel boasts of a wide cast of voices which not only maintain the listeners' attention but also portray the characters in a most delightful and colorful manner. Excellent read if you truly enjoy Dickens!