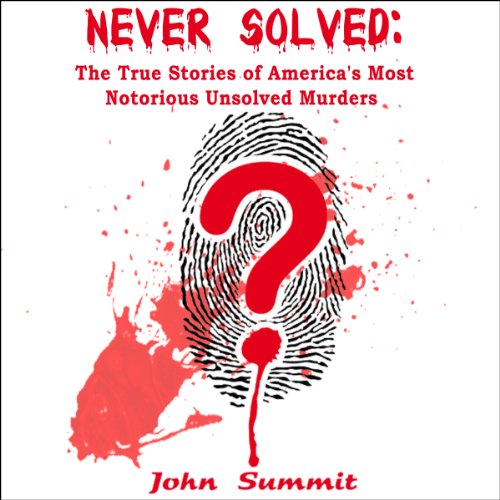 By: John Summit
Narrated by: Ginger Cucolo
Try for £0.00

Cold case murders are those defined that for one reason or another have not been solved. Cold case crimes are among the most difficult to solve for many reasons and the longer the case goes unsolved, the less likely they are to ever come to closure.

Despite increasing advances in scientific and forensic technology, it's not always the physical evidence that determines the resolution of a homicide. In most trials today, it's also vitally important to tie the suspect to that physical evidence.

Never Solved: The True Stories of America's Most Notorious Unsolved Murders is the 5th of John Summit's True Crime books and profiles seven stories of the most notorious true crime mysteries in American history. These cases will leave you flabbergasted at the bungled police stories, leave you wondering how likely suspects were never prosecuted and leave you sympathizing with the families of the victims who never saw closure.

What listeners say about Never Solved

The stories were great and I found them very interesting. The only problem was the narrator was a bit monotonous.

When you read a book that invites you to read other books on the topic of that book, you wonder, what is the point? Cursory review of cases, most of which true crime fans will already know more about than is covered by this book - black dalia, Etan Patz, Adam Walsh, Jonbenet Ramsey. Not worth the time, although is was less than two hours.

Where does Never Solved rank among all the audiobooks you’ve listened to so far?