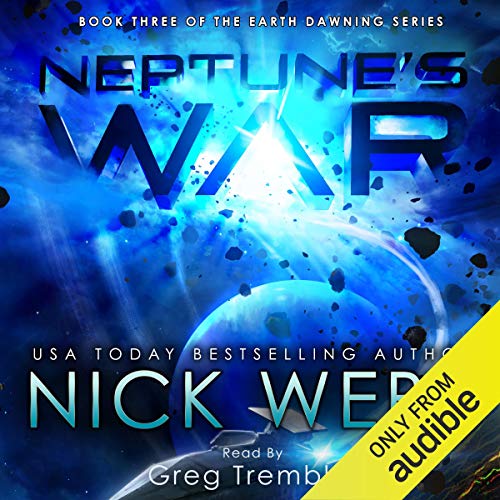 By: Nick Webb
Narrated by: Greg Tremblay
Try for £0.00

Humanity is on the brink. And, as always, the greatest threat comes from within....

A rogue element within the military has stolen half the Exile Fleet and taken it to Neptune to protect the rich and powerful, drawing critical resources away from Admiral Walker on the front lines.

The leader of the alien Telestines has recovered ancient devastating technologies to finally exterminate the human race.

And a fanatical Telestine death cult is out for blood - both Human and their own. For them, all must die for all to ascend.

Against them all stands Admiral Walker and the surviving officers of the Exile Fleet. The fragile colonies of the solar system desperately need their protection, and humanity yearns for its lost home on Earth. But Walker's plan for total victory is so horrific that even her closest friends work against her.

The end is in sight. The sun is on the horizon. And only the girl known as The Dawning can answer the question: Is it rising or setting on humanity?

Neptune's War is the third and final book of the Earth Dawning series.

What listeners say about Neptune's War

Nick Webb has a varied portfolio, and everyone of his adventures are great. Webb does a mix of styles, one moment he's writing a vary good military sci-fi story, and the next it's more of a lite-hearted adventure, and even and adventure that will make you belly laugh. This is a great combination, with so many twists and turns, you won't see comng, that if you have a problem with motion sickness, you should take some Dramamine before reading. As usual his words flow from him easliy and naturally (at least he makes it seem that way, it's anthing but easy). I would assume you've read Mercury's Bane, and Jupitor's Sword. Both of these books are a set up for this one, they give us so many questions, and we re eager to know the answers! He delivers with the flair we have begome used to. Imagine two amazing military stratagists, but both so stubborn they refuse to see what's imporant, not to win, but to live! We watch as Dawn reaches her potential, helped on by Nehaen. Whe found out a secret so terrible that is will stun you, and we reminded, no matter how many inhabital planets might be out there, we live on on of the beautiful and precious ones (and while this isn't goes without saying, we need to charish and protect our plant from those who would be so greedy, they would destroy it for a little more wealth), more interestingly we learn that greed and wealth do make those with the wealth to consider themselves to be infalliable, and better than the rest of us, and more importantly their needs outweigh everyone elses, and that we should see that as well! All this comes down to, if you liked the first two books, then you will love this one!

Sci Fi doesn't get any better than this

If you could sum up Neptune's War in three words, what would they be?

They're all so good. The relationships between them is what makes the books so good

Which character – as performed by Greg Tremblay – was your favorite?

All his accents are amazing: male, female, Brittish, Irish, Russian, etc. So many and all so good

The combination of Nick Webb's writing and Greg Tremblay's amazing reading, make these SciFi series at the top of my list. I'm always waiting for the next one. They're all so good.

The puzzle is complete, or is it ?

As the trilogy hits warp speed. Is Casandra really going to blow up our sun, in the name of God? Was the admiral truly going to destroy Earth so no one can inhabit this planet. The telastiens(sp) race and human make unique discovery. And make a very wise decision, for all races not just these two.
I tip my hat to you the writer, Nick Webb and narrator, Greg Tremblay. Writing a wonderful thriller with a love story twist. Excellent !!
Awesome narration for each character, the voice was matched, for one narrator !!!!!!! Amazing !!!! Thank you for this story.