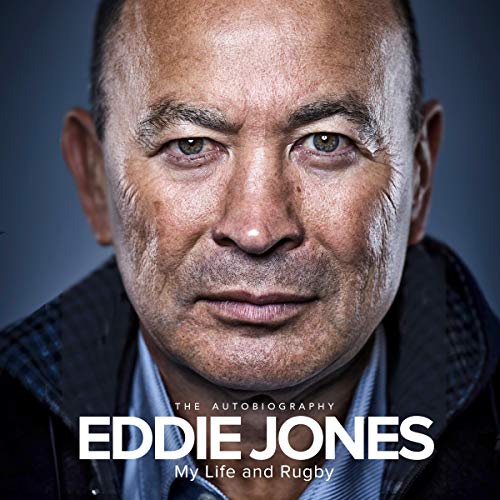 My Life and Rugby

Brilliant, honest, combative - Eddie Jones is a gigantic yet enigmatic figure in world rugby and a true legend of the game.

In My Life and Rugby he tells his story for the first time, including the full inside story of England’s 2019 World Cup campaign.

Since taking over as head coach of England in 2015, Eddie Jones has orchestrated a complete revival of the national team. He has won the Six Nations Championship back-to-back, including England’s first Grand Slam in a generation and their first-ever whitewash of Australia in their own backyard, as well as taking them on their longest-ever winning streak, matching the world record held by the All Blacks.

Eddie Jones is one of the most experienced and decorated coaches in Rugby Union. His career has spanned four World Cups: from the 2003 final, working with South Africa when they won in 2007 and causing the greatest upset in the history of the game in 2015 when he masterminded the Japanese victory over South Africa. Most recently, he led England on their incredible run at the 2019 World Cup, culminating in a stunning victory against the All Blacks before falling to South Africa in the final.Learning from the extreme highs and lows of his own playing career – including the numerous successes playing for Randwick and New South Wales but also the painful disappointment of never playing for Australia – he shows what it takes to be the best in the world and how everything he has learned about the game, both on and off the pitch, has gone into plotting England’s route to the top of world rugby.

Written with Donald McRae, twice winner of the William Hill Sports Book of the Year award and three-time Sports Feature Writer of the Year, My Life and Rugby is the story of one of the most compelling and singular figures in rugby. Told with unflinching honesty, this is the ultimate rugby book for all fans of the sport.

What listeners say about My Life and Rugby

As an england fan I loved eddie for everything he has done for English rugby but listening/ reading this just have me a deeper love for him. What a man just wow

Insights into a great coach

Yes he’s mouthy at times, yes he winds people up big time, but he is a great coach whose accomplishments across age groups, eras, club and test level are indictments to what a great coach he is. The book gives terrific insights into how teams are put together, embedding principles of hard work and innovation, of dedication, of togetherness, of special moments, of a man in love with our sport, of commitment to learning and if the make. Up of the man. Great read.

Management and leadership of high performance athletes and experts in their field.
Thoroughly enjoyed this read.

Couldn't leave this one alone. every rugby fan should have a listen. Eddie Jones is one of the greatest coaches of his generation.

Eddie Jones : My Life and Rugby

A great read for any sports fan. Eddie Jones’ impact on rugby is brilliant to listen to. Definitely Recommend

Love him or not, Eddie has been there and done it all. Great listen fair play.

excellent from start to finish. a great insight into the world of 1st tier coaching and rugby

very interesting to hear the man behind the coach. hearing from his youth in Sydney to after the 2019 World Cup.

As someone who has worked in Performance sport as a Strength and Conditioning Coach, I can relate to a lot of the excellent insights that are relayed in this book.
Coaches just want to make a difference and Eddie clearly cares deeply for his athletes.

After listening to this book I have a lot of respect for this small man. He has Accomplished a lot and does have a good rugby mind. Only one thing he is Englands Coach but I can over look that ! Top man

I liked the honesty of Eddie's account of his career so far. A must for rugby fans.

I thought this was fantastic. Anyone who is interested in the inner thoughts and insights as to what it takes to succeed should read this. It might help to have an interest in rugby. If you follow the game Eddie comes across as thoughtful and very human. He deeply cares about his country, his adopted country and his players. Above all, his love of the game what it stands for and his part in making the world a better place shines through.

Good insight to not only the world of rugby and coaching, but the human side of Eddie and challenges in the job.

I have learnt little I didn’t already know. I imagine his future book, when he isn’t working for anyone will have the drama and real back story we all desire

A good coach is one that is always learning and reinventing himself for the betterment of the time. Eddy Jones is one of those coaches his mystique is softened as he shares his love of the game. Great Book

Too well polished and inauthentic

This book reads like something published by a management consultant to promote their work. I think the most revealing part of the story is when Eddie says that he packaged and sold his coaching IP when working for the Brumbies. I don't think he's looked back since then!

Avid rugby fans will want to read it just because he's lived through interesting times and this does shed some light, but I'll give you an example of the way he tells his stories. Scotland v England 2019 ---> Scotts come back from 31 - 0 down. Eddie talks about how fantastic George Ford was off the bench and what a fantastic decision he made to bring him on to save the gave, we then roll off into a story about Fergie Time and being patient about scoring in the last 5 mins. But the real story there was Owen Farrell's leadership as Captain, as it had been throughout the South Africa tour that summer. Eddie doesn't touch it.

There are loads of these type of key gaps. If you know your rugby and read this, you'll be left scratching your head about why he doesn't mention anything that calls into question his judgement - then you'll remember this review!

Great insight into one of the most interesting, diverse and successful rugby coaches to ever coach the game. Most enjoyable