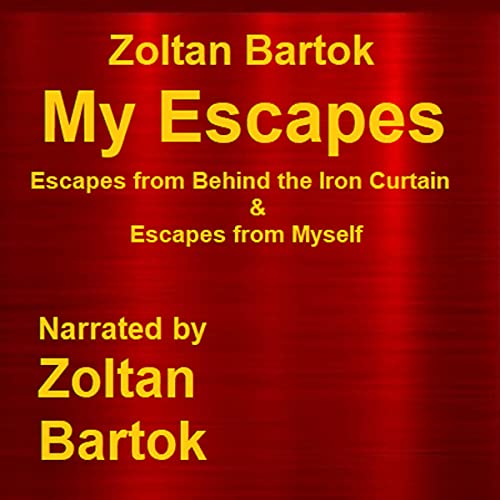 Accused of sabotage on the 10th anniversary of the 1956 revolution, the author tried to escape from Hungary. He was 17 years old. Caught before reaching the Yugoslav border, he was jailed and treated cruelly. In 1970, instead of regular military service, he had to do hard labor in a penal colony that was established for "enemies of the state”. Risking prison, he was able to trick police and obtain a red passport with a 24-hour Yugoslav transit visa in 1973. During a night in August, he swam to freedom in the Adriatic Sea. After 6 months in Italy, he was admitted by the USA as a political refugee.

After the 1975 Helsinki Conference, believing that the amnesty the communist government granted was credible, he returned to his homeland in 1976. After 10 months "back in the cage”, he risked everything and escaped through the Hungarian-Yugoslav border near a military post. However, the following day Yugoslav soldiers captured him about 100 feet from the Italian border, and put him in jail where he was accused of being a KGB agent. When the interrogations ended at the end of his prison term, he was actually helped by members of the Yugoslav secret service to sneak into Italy during the night of September 29, 1977.

In the city of Triest, he found refuge at Studio R, a gathering place for members of the Italian Red Brigade. After 10 challenging days among these Eurocommunists, he received money from friends in Germany and the USA. He took the train to Rome. He showed up at the airport with his only document, his American Green Card and was able to board a plane to New York.

Back in the USA, new adventures and new miracles awaited him. His struggles to survive the hardships and to adjust to the American way of life are described in book two, Escapes from Myself.

What listeners say about My Escapes

Swimming through the iron curtain?

He had a fairly good life in Hungary so why did he have to risk his life swimming in the sea in the night? He could have been shot by those Yugoslav border guards. He was a good chess player and had special privileges. He probably had no idea how hard life in America can be. Anyway, if it's a true biography, it's amazing. If it was all fiction, it would be even more amazing. Some time ago I bought the ebook and read it all. Very well written. Now I wanted to hear the story again. Narration is super. Had a good time listening.

There are times when the narrator's voice is kind of weak but that's where the suspense is. Besides, how could you talk enthusiastically about getting caught by Yugoslav soldiers a hundred feet from reaching freedom at the Italian border after being on the run from Hungarian communists for 2 days? Treated roughly in Yugoslav prison, accused of being a KGB agent, is also something one wouldn't be able talk about joyfully.
How would I react if my girlfriend whom I have know for 3 months told me a week after I moved in with her that she is 5 months pregnant? I would probably run, too.
These are just a couple of the many incredible adventures this author tells in his own voice. Eastern European but not much of an accent. Very easy to understand, pleasant to listen to. I really enjoyed it at 1.1X speed setting. The story is a definite 5 and I almost rated the narration the same.