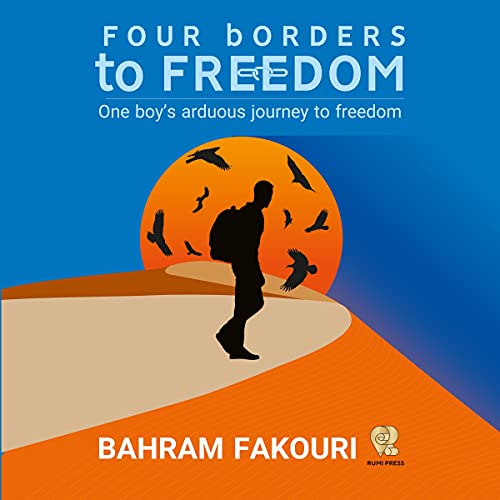 By: Bahram Fakouri
Narrated by: Ben Pryer
Try for £0.00

In a high-energy, adventure-filled romp across four countries and two continents, Four Borders to Freedom follows the adventures of a teenage boy as he escapes the confining political and social system of Iran to freedom.

Ben wants nothing more than to seek educational and professional opportunities in Europe. He dreams of this from the time he’s a young boy. But during the 1980s, after the Islamic Revolution and during the Iraq-Iran war, options for an ambitious and free-thinking young man are severely limited. So Ben opts for escape.

Ben’s journey leads him across borders and forces him into situations in which he must rely on shady human traffickers who specialize in the illegal transfer of people within the Middle East, and from there to Europe, Canada, and the United States. Few of these handlers are competent; most are greedy and dishonest, many even despicable. Besides the untrustworthy traffickers, Ben must also deal with border guards ready to shoot him, police ready to imprison him, and military officials ready to apprehend and deport him.

The journey is framed by a present-day series of counseling sessions that are recommended by Ben’s university professors. The stories of Ben’s escape are told in chapters that illuminate his hardships and small triumphs, interspersed with conversations with his counselor, that provide brief respites from the main narrative and moments to reflect and consider where this counseling path is taking him.

The novel is written in such a way that the listener (adult and young adult) will share the boy’s belief in himself, even as he navigates his way through one danger after another. It’s a harrowing story at times, but, ultimately, a story of courage and survival, both literally and philosophically. One extraordinary young man facing an extraordinary set of circumstances and predicaments: At its heart, this true-life adventure is an uplifting story of unwavering hope and determination.

What listeners say about Four Borders to Freedom

An incredibly honest portrayal of a harrowing journey to freedom that took place some time ago now but remains incredibly poignant today. It is difficult to hear of some of the terrible things that happen along the way. The story is told through the eyes of Ben and will have you on the edge of your seat throughout as the action appears to be non stop. It is a story of seeking asylum and new freedom but there are many tender moments and it serves as a coming of age story as well. The best book I have read in quite some time and I have been recommending to all friends and family I see!

Bahram recalls his account of how he escaped brutality and discrimination in Iran for a better life in Germany and Europe. it is harrowing at times and heart breaking but Bahram's fierce spirit of determination and love help him find a way himself out and he makes it. It explains what many asylum seekers have been through to get to Europe or the USA etc and how much they deserve our support and care once they arrive. Thank you Bahram for sharing your story. xx

This book is amazing, full of emotions and it never stop surprising. It is unbelievable to see how the main character keeps his irony and hope even if everything in his life it’s trying to take him down. I’ve felt the pain, I’ve exulted for the victories and held my breath every time the story took an unexpected turn. The book took me trough personal reflection and it changed me. A must read!