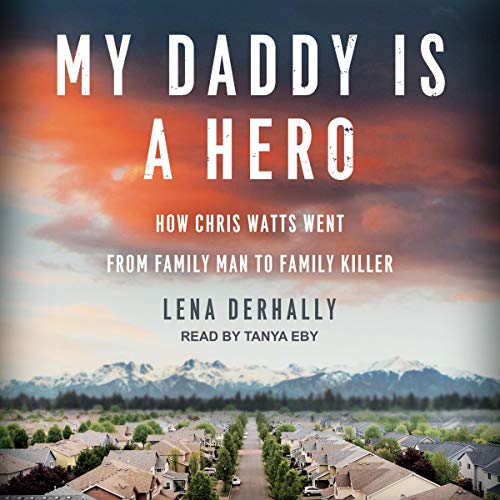 My Daddy Is a Hero

By: Lena Derhally
Narrated by: Tanya Eby
Try for £0.00

A husband. A father. A killer.

Chris Watts was a family man. Everybody, including his family, believed that. Yet, on August 13, 2018, he murdered Shanann, his pregnant wife, and two young daughters.

As terrible as his story is, it is also a warning because to this day, living behind bars, Watts is still acting out the character traits that made him kill in the first place.

In this, the first and only psychological exploration of the Watts family murders, psychotherapist Lena Derhally has pieced together the crime, the events leading to it, and most of all, her beliefs about the "why". She explores the childhoods, families of origin, meeting, and early relationship of Shanann and Chris Watts. She also examines Watts's double life and duplicity regarding his well-publicized affair with a coworker.

The audiobook includes an in-depth look at community psychopaths, the different subtypes of narcissism, how to prevent this type of violence, and interviews with a neuroscientist, a criminal psychologist, and a journalist. Using her knowledge of attachment theory, Imago relationship theory, and psychopathology, Derhally draws a profile of the real Chris Watts and - just as important - she warns listeners that he is still a danger today.

What listeners say about My Daddy Is a Hero

This remarkable event merits both good storey telling and excellent narration, neither of which was available here. I listened to all of it with difficulty, and knowing the details and outcome in advance, I was hoping for information that has not been made public to date. Some was detailed, but read so poorly, that I found myself drifting, thus missing content. Overall, I cannot recommend this edition to anyone of decernment. Maybe others will enjoy it, particularly if they are unaware of this event!

First of all the narrator tanya was very good, I turned the speed down to 0.8 and it was perfect! I actually really really enjoyed her reading💯i have followed this story religiously and i still found out so much more in this book than i had read or seen. I was so devastated about this and just can’t get my head round how or why he done this awful evil thing😢💔but as far as the book is concerned it was definitely worth the credit as it was very well written and the narrator was really really good too. It maybe takes a few chapters to get used to her voice but once you slow it down shes great and i never found myself drifting away and she kept my attention throughout it all and every single word. Thank you for insight to this horrible tragedy, its hard to say I enjoyed the book without sounding terrible 😢but it was very well written, great narration too.💯❤️thank you audible too💜Xxxxxxxxxxx

I found listening to this book very sad but a very true insight into Chris Watts mind and personality and how it seems nobody even his own parents truly ever knew him. I watched the Netflix documentary without knowing what the sad and utterly awful ending would be and so I felt shocked disturbed and very upset and although I personally didn't know them I cried and mourned their loss! Chis Watts is exactly where he belongs and I pray that he is NEVER released!

finally an answer to this man

if you have been following this case this book will help you finally understand why this monster done what he done.

Could have done with a male voice to play the Chris Watts part. Other than that, really good

The book is about a very recent and disturbing event so I think it’s still very raw in the minds of everyone involved in it, and it appears that the author has very much taken that into consideration, which is good. The last chapter rambled on a bit but up until then it was very compelling and thought provoking

Really well written and great insight into a narcissistic character. Full and rounded, not one sided and sticks to facts. Well worth reading if you are interested in psychology.

Excellent once speed is changed

This a very good appraisal of the Watts case & the possible psychological causes that led to the crime. I found the narrator off putting as she sounded a bit hysterical but when I changed the reading speed to 0.7/0.8 it was perfect. I’m not sure if this was a technical glitch in the original recording.

An truly sad and unbelievable listen. Narrator spoils it.

I watched the Nexflix documentary An American Murder: The Family Next Door. I watched it more than once, as I was in absolute disbelief at how it all ended.
I bought this book to get a more rounded understanding of the The Watts, and events leading up to the murders.
Now the book does deliver this, plus the fact I couldn’t stop listening. However, what is most irritating is the female narrator’s voice. She feels the need to change her voice tone an octave lower when reading the words of the men within the text. Ridiculous to say the least. Spoils it really.

Information you do but don’t want to hear.

I followed this case because it could have been me with my ex husband. The fear it has brought back up to me really focuses on the realization that you don’t really ever know someone. There were no signs of violence that anyone was aware of. Chris was a silent monster with a plan. This didn’t happen in the rage of an argument which makes this even sicker. I learned facts from the discovery I did not know and I pray for both families in this tragedy. People point fingers at upbringing or lack of nurturing, OCD that required full on attention to detail. This could have happened to anyone.

The last few chapters were my favorite because it explained terms that are still being thrown about and it has been an educational experience that would benefit anyone. I highly recommend it. Hey, I didn’t find plagiarism either. Ms. Derhally is an excellent writer and I plan on getting more books that she has written.

At times painful when the reader was portraying a man, cringeworthy.

Statements how the wife’s family received hate they never asked for while not mentioning the same about his parents. No mention of SW being drunk (high BAC 15 weeks pregnant) which had to contribute to their morning fight.

Ignored hours of online videos of SW abusing her children ie Bella says I’m thirsty and mom says you want a laptop make a vision board. Blatant abuse in her videos and the author glosses over this. Mentions Munchousen by proxy in one sentence, hello?! The woman had a severe case of this.

No mention that a woman with lupus avoids the sun but not SW.. it is assumed her “health challenges” were real when it’s documented most were fake. Friends said she faked her illnesses too, no mention of that either.

This book is simply a pity party for her fans and a kick in the gut to those who saw the man being abused while the rest of you ignored it.

armchair psychology at its worst

As a psychologist I am offended by this author's ignorance about the science of human behavior. Her sources are low quality and the conclusions she draws are faulty. I enjoyed the book until the final (several) chapters that are full of this drivel

I highly recommend this audiobook. Both the story and narration are wonderfully done. I was interested in learning about the psychology behind the case and learned quite a bit about it, as well as some other details about this tragedy that I didn't know. I did not want to read/support Letters from Christopher, so I'm grateful that some of the content was referenced in this book so it could be analyzed expertly. The author is fair and professional from start to finish.

I’m not convinced a human is reading this.

The reader sounded like a strange robot. I couldn’t enjoy the book because of this.

It was so hard to get used to the narrator's voice. She sounded so much like a robot that I almost quit and exchanged this book.

Gripping and masterful psychological exploration of the Watts family murders

My Daddy is a Hero is a poignantly written true crime novel unlike any I’ve read before. The author provides an in-depth analysis of the roots of violence and psychology behind Chris Watt’s brutal and merciless slaughter of his two innocent young daughters and pregnant wife with gripping and masterful writing. The author does more than just regurgitate the tale of the Watt’s case facts and confession. She delves deeply into the psyche of Watts and gives the reader an intimate understanding of his shocking and heinous actions and the covert signs of a hidden psychopath.

The narrator of this audible was really good which can be a problem a lot of the time. I’ve followed this case avidly and the author was still able to give great new insight. Highly recommend.

Terrible reading - would give no stars if possible

The reader is so fast and flat (except when trying to sound like a man, e.g., Chris Watts reading a text, in which case she slightly lowers her voice and that sounds ridiculous), that it is incredibly distracting. Someone earlier wrote that they didn't know Siri read books, which is about right. Sounds like a computer going too fast. Cannot believe this narrator allegedly received awards for reading -- maybe someone with the same name did the narration for the first time with this book? Is that possible? Personally, I will NEVER buy another book narrated by this individual. Horrible.

It began as a novel, stating information that is toned with biased opinions. Followed by an analysis of Chris' actions and behaviors. Nothing groundbreaking here. Had the author spoken with Chris she could have dived deep and given a thorough analysis.