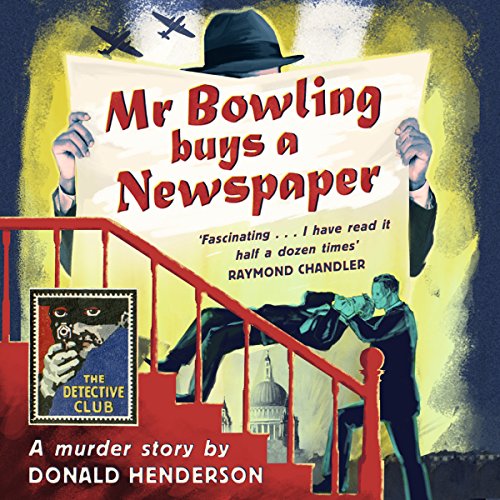 By: Donald Henderson
Narrated by: Tim Frances
Try for £0.00

In Raymond Chandler's favourite novel, Mr Bowling buys the newspapers only to find out what the latest is on the murders he's just committed....

Mr Bowling is getting away with murder. On each occasion he buys a newspaper to see whether anyone suspects him. But there is a war on, and the clues he leaves are going unnoticed. Which is a shame, because Mr Bowling is not a conventional serial killer: he wants to get caught so that his torment can end. How many more newspapers must he buy before the police finally catch up with him?

Donald Henderson was an actor and playwright who had also written novels as D. H. Landels, but with little success. While working for the BBC in London during the Second World War, his fortunes finally changed with Mr Bowling Buys a Newspaper, a darkly satirical portrayal of a murderer that was to be promoted enthusiastically by Raymond Chandler as his favourite detective novel. But even the author of The Big Sleep could not save it from oblivion: it has remained out of print for more than 60 years.

This Detective Club classic is introduced by award-winning novelist Martin Edwards, author of The Story of Classic Crime in 100 Books, who reveals new information about Henderson's often troubled life and writing career.

"I think it's one of the most fascinating books written in the last 10 years. Everyone who read it in my limited circle agrees with me." (Raymond Chandler)
"There is an element of psychological fantasy in this novel. Mr Henderson pursues a grim little theme with lively perception and ingenuity. His manner is brief, deliberately undertoned, and for the most part curiously effective. There is acute observation in the portrait of Mr Bowling." ( Time Literary Supplement)
"This tragedy of a madman is told with great simplicity, and is very much helped by the realism of its details. All the events take place in the duller London suburbs which are beautifully observed." ( Daily Express)

What listeners say about Mr Bowling Buys a Newspaper

Dark classic work unlike any other

If you read a lot of early 20th century fiction you will be astounded that this unusual and gloriously well written book was lost for so long. Henderson creates a glamour-less, seedy world which lives and breathes: imagine the people who are missing from Sayers saying and doing the things that are unmentionable or discreetly veiled in Christie. 1940s British society would have found it shocking, uncomfortable, sordid - and eminently recognisable. At a time when the party line demanded unswerving patriotism, moral fibre and cheerfulness, Mr Bowling sleeps with whomever propinquity offers - with absentminded bathos - and is so bored by the war and despairing of his dreary life that murder seems a completely reasonable idea...No wonder one contemporary reader described the book as “the last word in filth”... and no wonder Raymond Chandler read it again and again. Henderson’s world is chilly, bleak, exhausted and full of humour, and the monstrous Mr Bowling and all the lovingly described awfulness of the people who make up his world held me spellbound to the end.

Initially I struggled with the narrator who sounded bored with the story. However once I got used to his style I thoroughly enjoyed this book. To such a point I felt sorry for the murderer. He wanted to get caught but never did. The humour is of the period and that adds to its quaintness.

Enjoyable but of its time.

Mr Bowling is a serial killer who wants to get caught! He has murdered and got away with it thus benefiting financially. Over time his murders get sloppier and sloppier and he buys the paper to see if his work has been noted. So on that premis it makes for an interesting and refreshing read.

The story is set mainly in War time London and contains dry humour and minimal gore, swearing etc. Though it can be horrifying at times. Slow paced and not edge of the seat stuff it's just a refreshing change to modern crime thrillers. It's let down slightly by dragging on a bit but on the whole I'm glad I listened to it. But its not a ' cosy crime' IMHO

Glad it's been re-issued.

His voice fits the book so well, great casting is so important. I've given up on books I really want to hear that have the wrong voice.

An oddity of a period piece & engrossing.

I suspect that most people come to this book on learning it was a favourite of Raymond Chandler's, that's certainly why I picked it. It is an odd period piece, set during the Blitz in London, it's a time of a fragmented society, houses being bombed, people coming and going. And our protagonist, Mr Bowling, takes advantage of this to indulge his new compulsion - commiting murder. (The significance of the title is that buys a newspaper after he's commited a murder to see if it's been reported anywhere), The tone is dispassionate, amoral even, Mr Bowling doesn't really feel any guilt, but also doesn't seem to care too much about being caught, he's mostly expecting to be.

The narration was absolutely excellent, the tone caught the mood and the period so well that this is a book I'm glad I listened to rather than read.

Compelling crime story with many twists, which paints a vivid - and very different to the accepted version - of life in wartime London. This book is up there with Orwell and Patrick Hamilton, and deserves to be much better known. Excellent reading by Tim Frances.

This isn't your usual classic murder mystery. I enjoyed it. It was well read and I liked the characterisations and the flavour of the war years.

Oh my how good was this story!

This was recommended by Robin Ince on his Bibliomaniac book and I hadn’t heard of it. Such a great book, takes you on a journey you just don’t expect but I thoroughly enjoyed it!

Not really a 'detective novel' but a great read

A well-written, entertaining and original psychological novel, told from the perspective of a deeply troubled and put-upon man in London during the war. He kills more than once, but one comes to understand, if not sympathise, with him. I can see why it was such a favourite of Raymond Chandler.

I think I would have enjoyed this book a lot more 40 years ago, when I went right through the early 1900's genre of detective stories. I found it a bit slow in 2018

Would you be willing to try another book from Donald Henderson? Why or why not?

Not really for the same reason as above

Appropriate for the genre and period (sorry - 6 words)

Did Mr Bowling Buys a Newspaper inspire you to do anything?