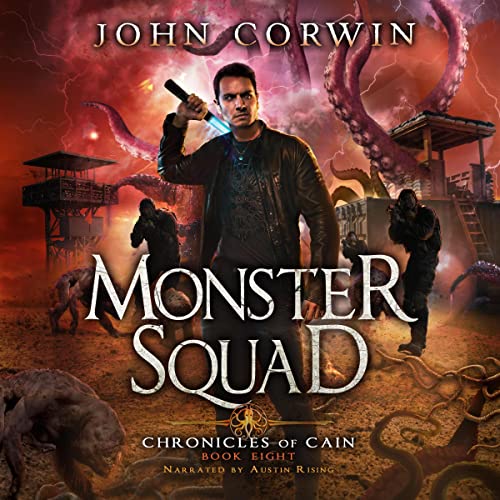 Cain is now doing the unthinkable—he's working for the fae.

Gaia has an eldritch problem, and Cain is tasked with stopping it before it gets out of control. To do that, he'll have to make an uneasy alliance with a human black-ops organization called Aegis. Run by the US government, Aegis has the personnel and resources to stop an eldritch invasion in its tracks. The problem is, Aegis has been taking a short-term approach, blowing up eldritch wormholes as they form on Gaia rather than cutting them off at the source.

Cain knows that this game of whack-a-mole is a losing proposition. The best solution is to invade the wormholes after they form and steal the power sources so the eldritch can't create wormholes anymore.

These power sources aren't just batteries, they're the sentient ethereal remains of Ekhsis called Enlightened. The Enlightened are trapped within crystal wombs called crystalae. Cain hopes that by liberating them, he's not only shutting down eldritch wormholes for good but also rescuing godlike beings who lived when Ekhsis was flourishing.

But Aegis has other plans, and their disagreements with Cain threaten to shatter their fragile alliance. To make matters worse, the fae are embroiled in an interdimensional civil war. If Cain can't keep Aegis under control, then the eldritch will overrun their defenses and infest Gaia Prime.

Cain will stop at nothing to save Prime because if he doesn't, then he'll never be able to enjoy another frosty mangorita.

And that's the worst thing that could ever happen.

What listeners say about Monster Squad

loved this series, when is the next one?

I have thoroughly loved this series. loved the cameos too. Caine has grown alot and I cannot wait to see where this goes. when is the next one? I devoured these 8 in a month during commute. thank you!

I really love these books, great story with nerdy references…. Great combo, the characters are good I have a new favorite for this series, the narrator is also good his different characters keep you interested… can’t believe it took me this long to catch up.

A lot of writers struggle with coming up with new ideas after their several books into a Series. But this author does a great job keeping you entertained and guessing but as always he leaves you wanting more. Probably one of my favorite book series of all time

Honestly, there is something special about this series for me. I can't get enough. It has everything, monster momma drama, powers, action, real plot, and a narrator that has just enough masculinity for the tone of the book.

I couldn't help but think while listening, I felt like these characters are starting to feel like my idea of what family should be. I've never had a family and I really enjoy this aspect, it's nice.

My question is, Whats going on with Hannah?

Great series can’t wait to see what John comes up with next!!!… hope Layla comes back in next one I really missed her attitude in this book.

better then the last one by a long shot

The only problem is that is the excuse for Layla not being in the book is weak.