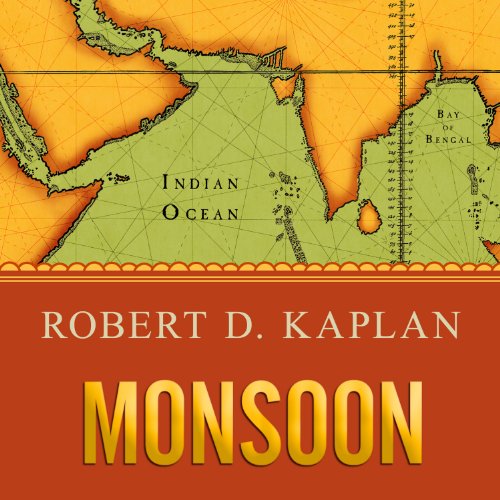 On the world maps common in America, the Western Hemisphere lies front and center, while the Indian Ocean region all but disappears. This convention reveals the geopolitical focus of the now-departed 20th century, but in the 21st century, that focus will fundamentally change. In this pivotal examination of the countries known as “Monsoon Asia”—which include India, Pakistan, China, Indonesia, Burma, Oman, Sri Lanka, Bangladesh, and Tanzania—best-selling author Robert D. Kaplan explains how crucial this dynamic area has become to American power. It is here that the fight for democracy, energy independence, and religious freedom will be lost or won, and it is here that American foreign policy must concentrate if the United States is to remain relevant in an ever-changing world.

From the Horn of Africa to the Indonesian archipelago and beyond, Kaplan exposes the effects of population growth, climate change, and extremist politics on this unstable region, demonstrating why Americans can no longer afford to ignore this important area of the world.

"The book's political and economic focus and forecasts are smart and brim with aperçus on the intersection of power, politics, and resource consumption (especially water), and give full weight to the impact of colonialism." ( Publishers Weekly)
“An intellectual treat: Beautiful writing is not incompatible with geopolitical imagination and historical flair!” (Zbigniew Brzezinski, former national security advisor)
"The audacity of Robert Kaplan’s approach to geography as fate is spellbinding. Whether you agree or disagree with his analysis and forecast that the Indian Ocean will occupy the center of global change and international politics in the coming decades, you will find this erudite study gripping and informative. It is a welcome and important addition to the debate about America’s role in a rapidly changing world." (Jim Hoagland, contributing editor, The Washington Post)

What listeners say about Monsoon

A map is worth a thousand words ...

If you could sum up Monsoon in three words, what would they be?

A frustrating listen. This book just doesn't cut it without visuals--which makes this a frustrating listen. The listener constantly is thinking that it would be great to look at a map or illustration to aid in visualizing the author's explanation. This is particularly true in the opening sections when the topics are about voyages, seasonal weather patterns, geographic features, etc. In his own words, "... a map of these seas is central to a historical understanding ..."It is possible that someone who really knows the geography of this region would do fine without the visuals, but somehow I don't think that makes up a large share of the possible readers. Sure it is possible to consult a few maps while reading the book, but that doesn't work well for me since I listen on my bike commute. Instead of moving this book into audible, the book should be featured as an ipad or other book that could take advantage of maps, illustrations, photos, etc. As to the content of the narrative, I found it a reasonable slice of the world to include in a single book, and the author has significant insight and has done a good job of making this into a sweep of history in a way that informs the current situation. So it is still worth the listen, particularly as some of the content covers nations and political movements that are not common topics in the Economist or other news sources.

The sections when the author talks about the history of specific rulers and nations, the solid research and narrative work well.

Have you listened to any of John Pruden’s other performances before? How does this one compare?

Pruden is an ideal narrator as his voice has expression but never gets in the way of the material.

Great Progressive-eye'd view ofthe Indian Ocean geopolitical landscape. The author is keenly aware of the slant Al Jazeera puts on Indonesian society, but misses, or maybe hopes his teaders will not notice, his own Keynesian bias and anti-capitalist leanings. Warnings of the downfall of the west and truebelief in the failed ideology of Global Warming aside, this is worth a read; if only to demonstrate the diversity of Islam to westerners informed primarily by the uninformative US press corps(e).

What made the experience of listening to Monsoon the most enjoyable?

Owing to the title, my thoughts were that the definitions of "American power" were sullied or confused in the presence of, or lack thereof, the direct discussion of such. Midway through the book, I found myself wondering when Mr. Kaplan would explicitly detail such limits, privileges or any other aspects of the American power that I assumed the book would be categorically rife with in composition, but was tested in patience for the much more holistic, comprehensive observations that make this book so enjoyable. Rather than a cookbook of palpable definitive explanations of American power, Robert employs a distinctly human prose consisting of refreshing, judicious imagery followed by staggering episodes of the human condition. With a precision that admittedly reserves its poignancy until the closing chapters, but carries genuine interest throughout, Kaplan details the geographic functionality of American power projected maritime stability and its ensuing impacts on Indian Ocean bound cultural and economic exchange. Through a colloquially objective lens, we are able to extract an enriched and versatile portrait of todays greater Indian Ocean, the forces currently at work, and the historical foundations of such, thus cognizing and extrapolating prospective observations of the future of American power per its operational effects and convincingly important role, perhaps duty, in the realm of the monsoon.

What does John Pruden bring to the story that you wouldn’t experience if you just read the book?

John Pruden is neither dry nor juxtaposing in his delivery. His intonations mesh well with Kaplan's affecting prose. My contention is that Monsoon was written with a humanity-minded, academically supported approach. Thus given, John Pruden skillfully blends the two in a modest, yet stirring rendition of the books unmistakably valuable narrative.

I found myself nodding my head a lot in agreement with all manners of characters in the book, including the author himself. The book contains a scholarly wit that appropriately inspires laughter, but equally arouses the exasperated anger one feels with such unavoidable inhumanities; this evinced in response by me through gritted teeth instead of tears.

A hallmarking factor that I'd be dishonest in overlooking is how positive of a light America seems to be portrayed - a careful observation, less than a criticism. In spite of this, I was nonetheless contented with a positive detailing of the world's premier powerhouse. With this, the ideas are hopeful and leave me pleasantly enthralled in the abounding possibilities only known to humans not yet born.

This is a comprehensive look at the past, present and future of the countries surrounding the Indian Ocean and its political, geographical, and economical importance to world order. Kaplan has researched heavily and shares his insights fully. As third world countries begin to raise themselves economically in status, old political balances begin to shift. It is not a book you take to bed with you. In fact the only way for me to stay engaged was to keep maps on hand for my own reference.

Would you recommend Monsoon to your friends? Why or why not?

Yes, to those who have an intellictual bent. It very informative, very rich in facts, figures, data, etc. I wouldn't call it a story - it's not a story, it's history, sociology, geography, politics and religion all blended together to describe this important but mostly overlooked part of the world.

If you like this kind of book, if you read to be informed, this is a good choice. If you read for relaxation, for a good "story" then probably consider other titles.

I may be biased, but I have enjoyed Kaplan’s writings. They are engaging, interesting and balanced. He provides in depth historical information combined with his current experience and interviews of multiple perspectives.

Monsoon is best paired with Asia’s Cauldron as the two provide a wide view of the Pacific through the Indian Ocean. Kaplan flows easily from deep historical analysis to modern contemporary issues and ends with concrete analysis and recommendations. He is not deterministic nor myopic in his treatment.

This book was especially helpful to understand the connections of the Levant and the Middle East through the edges of the South China Sea. He covers the geography, culture, and social impacts of each society in a way that allows the reader to imagine themselves in the place and time being discussed. I gained a much deeper understanding of why things are as they are currently and what trends are driving towards the future. That geography and strong individuals alike have massive impacts on the forces of history.

This book covered Oman, India, Pakistan, Indonesia and all parts between. It is an excellent primer in the region and well researched with sources for deeper analysis if the reader should desire to dive into a particular subject.

Overall, it is an excellent book and essential for understanding the future global trends.

started with some nice history. But degraded into an awful america centric evaluation of India. very superficial. does not understand India at all.